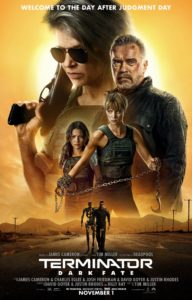 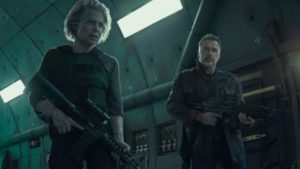 This movie drops the ball on all kinds of levels from the characters to the story to the action… it’s a mess.

What a shame. They tried to make a movie they was very different than the other Terminator films here, but they did it under the guise of claiming this was a continuation off of T2. They lied to us at every turn, and made it look like this one was going to be fan service, starting with bringing Linda Hamilton back. But instead of bring nostalgic, or even just going for being its own thing, this movie was actually disrespectful. It disrespected the fans again and again. And it had a lousy story, some mediocre action (sometimes good, other times hard to even see,) and a dull story. Talk about dropping the ball. They really should have known better.

Terminator Dark Fate. What a mess. I believe this might be the end of the Terminator franchise. The movie did terrible at the box office, losing tons of money. The executives have got to be kicking themselves for making this, wondering where exactly they went wrong. The only way I could see this thing coming back again some day is if James Cameron finally directs again, and if they bring back Edward Furlong, as well as everybody else, (Arnold and Linda Hamilton again.) So let’s start talking about the problems.

The first has got to be what they do with a Furlong. To give a little backstory, there have been two good Terminator movies, the first one and the second one. And the second movie, Terminator 2, or T2, is far superior to the first. It is actually one of the best action movies and best sequels of all time. That’s the movie that featured Edward Furlong playing a teenage John Connor. It was all about his connection with this Terminator protector (Arnold Schwartzenegger,) while his mother, Sarah Connor, (Hamilton,) was trying to destroy Skynet and Cyberdyne, (the companies that made the Terminators.)

So there’s a lot of love and nostalgia for Furlong. The real life actor had drug abuse problems and was replaced in the movies, first by Nick Stahl, then Christian Bale, and finally by Jason Clarke. Those replacements did not go so well, (the movies were terrible.) And now, with Terminator Dark Fate, we are given the promise that Furlong is back. That means a lot to the fans. Only he’s not back. It’s a CGI version of a teenage Furlong who is killed in this one and only has one tiny scene. He maybe has one line and then is shot dead. Talk about disrespectful. And I get that they were trying to open with something big, that would get our attention, but the truth is, they didn’t use Furlong at all. It is a one-two punch to the gut, first that they didn’t use Furlong and replaced him with CGI, and then second, that they killed him right away. Talk about a brain dead move.

But let’s take a step back, while we’re still on the nostalgia page, to talk about some things this movie does right. It brings back both Linda Hamilton and Arnold. Now Arnold has been back, in these sequels, again and again. So that’s nothing new. But this is Hamilton’s return to the series. And the fact that they are the best known stars in the movie is meant to have us think that they are going for nostalgia all the way. It’s a lie. Sure there are other bits of nostalgia, (the movie opens with a grainy video of Sarah Connor’s meltdown in the asylum in T2. And then we get a scene of a night time battle where Terminators are coming out of the water blasting laser guns.) But all of this is over very early on and then washed away by an awful new story.,

There’s one last bit of nostalgia in here, when the bad Terminator shows up for the first action scene. It is a car chase where this villain is driving a giant bulldozer, chasing after our heroes who are in a small pickup truck. This feels right out of the second movie (and is a nice homage,) where the  T-1000 (Robert Patrick’s villain,) was driving a giant truck mowing down our heroes who were trying to get away on a motorcycle.

So the movie is certainly trying to make us think it cares about the other films, at the start. Only it doesn’t. And that becomes apparent pretty quickly. First, the CGI version of Furlong. Then killing his character right away. Then there’s the fact that Arnold is nowhere in sight for the first half of the movie. Then there’s the fact that the music isn’t even brought in until late in the second half. Now let’s talk about that for a moment. The Terminator movies have iconic haunting music. And the sequels that followed T2 have never used it. Maybe they didn’t have the rights. But clearly, with this new movie, they do have the rights. So why wait until late in the second half to bring it in?

I suppose the hope was that bringing it in late would give the movie an extra punch. Like it would bring people back into it that had checked out. But the truth is, we don’t get the real song until the closing credits, and by that point it is way, way too late. If you know the behind the scenes stories about this movie, you know that director Tim Miller clashed with James Cameron again and again. Miller wanted to make his own movie, and had no respect for Cameron. And that’s why he killed John Connor so quickly. That’s why he didn’t bring in Arnold until halfway through the movie. And that’s why he didn’t bring in the music in full until the closing credits. What a fool. This guy clashed with Ryan Reynolds over Deadpool two, and it cost him the chance to direct that second movie. Here, he wastes an opportunity to have Arnold and Hamilton back together again, in a Terminator movie, and that’s a real shame.

If only the problems ended there. They don’t. Continuing with the idea of making this movie different than the others, they get rid of Skynet. Completely. The idea is that whatever our heroes did in the second movie made it so that Skynet never happened. And while it’s cool to have consequences to events from previous films, what makes it all pretty pointless is that they just replace it with another company, Legion, that does the exact same thing. The Terminators literally look the same (same metal skeleton underneath.) And I’m not saying that they should have been different (at some point, if you change everything, it’s not really a Terminator movie anymore,) but just that there was no point of getting rid of Skynet.

With so many problems, it’s hard to find much good in this film. They change the formula up as much as possible. Yes, there are still two Terminators sent back from the future, one good and one bad, but the good one is a woman, and Sarah Connor, who joins up with them. Plus the person who they are protecting is a woman. So that amounts to three women on this mission together in the first half. That part is kind of cool. And the action isn’t bad either. Tim Miller knows what he’s doing when it comes to having characters use weapons, (he did that great in Deadpool too, with the bad guy swinging axes around.) But Miller uses CGI way too much here, to the point where nothing seems or feels even semi-realistic. It helped the first two movies that the Terminators still moved like humans. It made them more believable, and therefore more scary. Here characters move so fast, that it looks fake.

The list of things wrong with this movie goes on and on. There’s an action scene at night where it is so hard to see things and to follow, that we just check out and stop caring. Then there’s the awful de-aging effect on Terminator Arnold in the flashback scene. But these are small things. They wouldn’t really matter if the movie got the big things right. Going in, I remember thinking there are only two things this movie has to do right to be good… feature Edward Furlong as John Connor and use the music. I was hoping for at least one of the two. But they really didn’t do either one. What a waste.