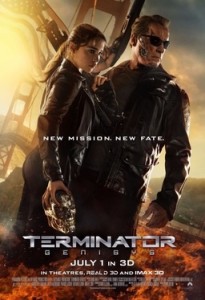 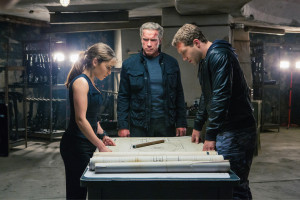 Not a bad movie, and certainly the best of the franchise since Terminator 2, this movie is decent while you’re watching it, but easily forgetable afterwards.

Terminator Genysis wants to be Terminstor 2. It deserves credit for setting its ambitions pretty high, and finally getting the time right (unlike the other sequels that followed T2.) unfortunately,  for today’s generation, you need a little more than that. The references to the original films

Terminator Genysis is not exactly a great movie, and yet it is the best film in the franchise since Terminator 2. That right there is testament to how bad the previous two sequels, that came between this movie and T2 were. With Terminator Genisys, at least we feel like this movie can exist in the same ballpark as the original two films as far as its content and environment. Finally.

The premise is very much like that of the first film. At least at the start of this movie. Judgement Day is over. The war is over, and the humans have won. The only way the terminators have a chance at defeating the humans is by going back in time. Their plan is to send a robot back through time to kill John Connor’s mother before he is born. Connor is the leader of the resistance. And so they do. This prompts Connor (Jason Clarke,) to send someone back to protect his mother… Kyle Reese (Jai Courtney.) Now, this is the exact plot of the first film. Luckily when Reese does goback in time, the story veers off onto a new path.

Apparrntly Connor was sent back into an alternate timeline. In this one,  Sarah Connor (Emilia Clarke,) was met by a Terminator when she was nine years old. Played by Arnold Schwartzenegger, and called Pops here, he has been with her ever since. And together the two of them  (along with Kyle Reese,) intercept the old Arnold (brought to life here by using footage from the original film,) and destroy him. Sarah and Pops knew that this Terminator was coming. They also knew that Reese was coming. And so they were ready.

Many people have problems with this alternate timeline story where the events of the original film are changed. Sarah Connor never met a Terminator when she was nine years old, for example, in those original movies. And saying that she did now, changes things. That is exactly the point. If the movie didn’t add anything new, then we would be looking at the exact same story as the original film. That’s what an alternate timeline is. JJ Abrahms brought it to our attention with Star Trek (2009) and Lost (TV show.) Then X-Men: Days of Future Past used it, and now Terminator is using it (all franchises, of course, because the real purpose of an alternate timeline is for filmmakers to say that events from previous films never happened.) but if those other movies aren’t being reprimanded for doing it, then why is this one?

On top of that, regarding time travel, even the original movie didn’t make a whole lot of  sense. You see an adult John Connor sends Kyle Reese back in time, from the future, to go into the past and protect his mom. Reese meets the mom in the past, has relations with her, and fathers John Connor. And therein lies the problem. Who was Connors original father, when the boy was born, before he grew up to meet Kyle Reese?

So it’s safe to say that even the original Terminator films had things going on that didn’t really make much sense, regarding time travel. That’s just the playing field that these movies have created for themselves. They bend the rules a little. So what. The movies are still fun and entertaining.

Only this film, Genisys, is far from great. The first half is about Reese being sent back and then he, Sarah Connor, and Pops dealing with a liquid metal robot, (basically Robert Patrick from the second movie, although played by a different actor here,) and then the second half is about John Connor coming back to the past.

Only John is a robot now. He’s a terminator himself. And this movie stupidly spoiled that idea in the trailer. It was the key thing that could have made a huge difference. Without knowing that, you could have gotten scenes like those in the  movie Devil or The Thing where our three  main human characters are sitting around or trapped in an elevator, and they all know that one of them is a Terminator, but nobody knows which one. But the trailer give away is a major mistake.

The movie does feel like the original films in the way it mentions Skynet and Cyberdyne, about as often as the Bourne movies mention Treadstone and Black Briar. But something here is definitely missing. Our caring. With all the CG effects and over the top action, there’s certainly a lot going on, but the movie gives us little emotional involvement or reason to care. I think that Reese finally learns he’s the father of John Connor, but other than that, this movie really offers nothing new. It got closer than the other sequels did, but this movie still didn’t quite hit its mark.