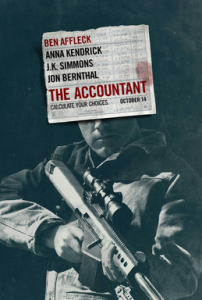 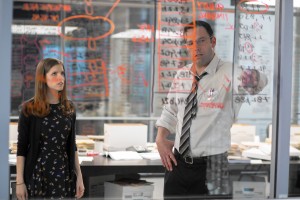 It’s Jack Reacher meets the Equalizer with the idea thrown in that one of them was a mathematician by day, and a vigilante by night.

The most interesting thing about this movie is Ben Affleck’s character, a man with autism who uses his eccentric ways in his line of work. Other than that, it’s pretty much a straight up action movie, albeit a pretty good one. Christian Wolff (Affleck,) is an amazing accountant who can crunch numbers like nobody’s business. He is called in to look at the books of an organization when it appears that someone is skimming off the top. Because of the nature of his business, Christian often finds himself dealing with some unruly customers. For that reason he is well stacked and trained with all sorts of guns and weapons. The movie definitely builds in excitement, but it also goes from something kind of special to something that very much feels like other films  We’ve seen the lone assassin who has an impressive set of skills. What we haven’t seen before, is this assassin also be an accountant. That’s where this movie strikes gold.

The Accountant is a movie about a strange and unique guy who becomes a killer and vigilante of sorts. Christian Wolff (Ben Affleck,) is a tax accountant for the mob. He is the guy that organized crime families call in when they think someone who works for them is skimming. Christian finds the problem. Because of his line of work and knack for dealing with criminals as part of his job, Christian has trained himself to be lethal with all different kinds of guns. Early on he tells a client of his that he doesn’t fish, he shoots. Then he goes out to the client’s property and sits up a sort of rifle range there for target practice. His shots are all incredible, as we learn from the reaction of the client, but this is just scratching the surface. As it happens, Christian has the skills of a trained assassin.

We see flashbacks from the beginning of Christian as a kid. He was autistic and had all kinds of problems dealing with little obsessive compulsive situations. For example, if Christian did a puzzle and a piece went missing, he would freak out. He just needed to finish things that he started. The puzzle itself, he was doing upside down, so that every piece looked exactly the same. This was meant to show us that he could take on crazy challenging tasks, but just needed to be able to see them through to the end. Christian’s father won’t let the boy stay at a home for the summer where a specialist offers to help Christian find ways to cope with his strangeness. The father doesn’t want things sugar coated for his son, and tells the specialist that life is tough and Christian needs to learn that and get over it.

The father is a military man, and Christian, too, served in the armed forces. The flashbacks continue throughout the film, showing what happened to Christian’s family and his mother. They also show the father training his two sons. He teaches them both how to fight, and shows no mercy to them, wanting them to be more than capable of fending for themselves. These flashback scenes are pretty interesting, despite also being brutal. Christian’s autism combined with the father’s martial arts training of the boy clearly was enough to make him the way he is today.

What exactly that is, ends up being served to us as kind of a mystery at first. We learn everything through the eyes of an agent named Ray King (JK Simmons,) who is tracking Christian down. King brings in a female agent, Marybeth Medina, whose career he’s been following. He blackmails her into helping him, threatening to expose her criminal record. Then the two of them get to work. King explains that Christian has worked with all sort of criminal enterprises, always being the man in the background or in the shadows. King wants to know how someone like that survives. He wants to know who this guy really is.

The King and Medina story helps to give us a fish-out-of-water perspective on what’s happening. It gives us the explanations, whereas watching Christian in action gives us the visuals. We watch him help a client find ways to save money and then retreat to a storage unit where he has a mobile trailer parked inside. Christian steps into the trailer and it is like a whole other home, complete with paintings and an arsenal of top grade weaponry. Christian also has a house that we go to. The storage unit and trailer are his backup plan. Christian takes on a new client that is a robotic body parts company, helping to enhance the lives of people who don’t have all of their limbs. Christian has been called in because something doesn’t seem quite right with the books.

For a while in the first half, Christian seems like an ordinary accountant. He’s obviously an exceptional mathematician and has good aim at the rifle range, but other than that, nothing seems out of place. There’s a scene where he stays up all night going over numbers, writing everything down on glass windows, (from A Beautiful Mind to Good Will Hunting, why is that geniuses in movies always do this? Either windows or mirrors, they just refuse to write on paper. Probably because this is more cinematic and strange.) Christian explains everything to Dana (Anna Kendrick,) the woman who found the inconsistencies with the books that got Christian called in, in the first place.

The next thing you know, both Christian and Dana are being hunted down by assassins. While we were  watching the Christian scenes in the first half of the movie, we also got a couple of scenes with a hitman played by Jon Bernthal. He’s obviously a very smart man and understands the financial business and who is playing who. Early on, he sits in a car discussing the financial matters with a man he has been sent to either kill or at least intimidate. Since we don’t really know Christian well in the first half, and can’t tell if he’s a good guy or a bad guy, it’s hard to gage which side the Berenthal character is on as well. Is he working with Christian, doing the dirty work of assassinating people based on the discoveries that Christian finds? As it turns out, he and Christian are not sin the same side at all.

Christian and Dana now go on the run. They take on loads of assassins. The second half of this movie feels miles away from where the first half was. The first half seemed to really be about a mathematician. The second half is more like the story of a mercenary. We are suddenly given loads of backstory. We learns about Ray King, and how he crossed paths with Christian once before. We learn of Medina, and why King has her doing whatever he wants. We also learn of Christian and how he got started in all of this after spending some time with Jefferey Tambor in a prison cell. The reveals are to a certain extent cool (the Simmons one,) and to a certain extent too much (the Tambor one.) Not every character needs a backstory, and someone should have told that to this film.

The action, in the final act, becomes to something out of a revenge / assassin movie. It really does become a sort of Jack Reacher meets The Equalizer (to use two modern examples.) If you want something more dated, this guy is kind of like Leon: The Professional. He’s just that good. If you think Denzel Washington was good at the end of the Equalizer, taking on a bunch of guys at a home goods story, wait until you see what Christian does in someones house. Let’s just say, this guy is so talented at fighting, he’s practically a superhero. I mean, these skills are not normal. And by the end of the movie, Christian is going all out on whoever is there to stop him

The Accountant is an okay movie. Ben Affleck is good, and his character is good, but the mystery plot line is occasionally interesting. Part of the problem is that at various times throughout the film, things get way too complicated. This movie and this story just has too much going on, and doesn’t seem to know how to cut back and prioritize. Jack Reacher (the first one,) is a much better example of a mystery that was smart and action-packed, but not overly complicated. But what the Accountant has going for it is this character. We’ve never really seen someone like Christian Wolff again. Sure we’ve seen movies about crazy geniuses, like Rain Main, and we’ve seen tons of movies about wild assassins on the run, but we’ve never really seen them combined into one. While the movie does get that right, it also has a decent amount that it leaves to be desired. One of these is the relationship between Christian and Dana. Things seem to be going well in that department, and then Dana more or less drops out of the movie in the second half. The JK Simmons situation, interesting as it is, also is way too complicated, especially in terms of the female British voice that calls Christian and why it suddenly starts now calling him. Despite its tricky storyline, the action is great and the movie is definitely enjoyable.