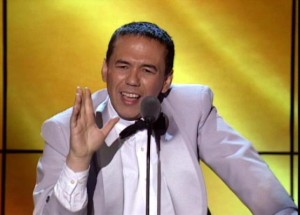 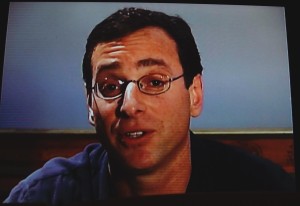 An unusual documentary about a single joke and a ton of stand-up comics who all have their own way of telling it.

The Aristocrats might be the strangest documentary ever made. that’s because unlike most documentaries that either follow an event from history or a person’s life, or even a job, this one follows a joke. how you can make a feature length movie about one single joke that takes at most a minute to tell, i would never have guessed to be possible. but it is. and the movie ends up being pretty decent too.

that’s because it actually ends up being about a lot of things. it’s about the world of stand up comics. not so much about their job, but about the way that they tell this joke to each other. the joke is not something that anyone would ever think of performing on stage, or as part of their act (except for gilbert godfrey at hugh hefner’s roast, but he’s the one and only.) instead, it’s a joke that stand up comics tell each other and use as a sort of competition to amuse each other.

the idea is that every comic tells this joke differently and tries to impress the other comics with the things he is able to think of to put in it. as it happens, it is the filthiest, most vile joke possible and that’s exactly the point. the idea is to see how dirty and disgusting and horrific and offensive one can possibly make it. that’s why it’s not for the mainstream. and neither, really, is this movie.

to like or appreciate this movie you have to have two things going for you. first, you have to like stand up comics. that means you have to enjoy listening to a one person storyteller and take pleasure in not only the specific words this person chooses, but also in the delivery. stand up comics are like bards from the days of ancient greece. they stand up in front of everyone and tell a story and it’s their job to amuse you. but how do you amuse someone who has already heard this same joke in twenty different ways? that becomes one of the questions of the movie.

the other thing you have to be okay with, in order to enjoy this movie, is being disgusted and offended. because that’s exactly what this movie is trying to do, every chance it gets. the joke is about a family that gets up on stage and does absolutely terrible things to each other. these things are sexual (which means all kinds of incest), they are self-depricating (there is often feces and vomit included) and they even involve beastiality (the family has a dog, and makes the dog do things too.) it’s a lot more than not having a weak stomach. you have to actually like hearing this kind of stuff to appreciate the movie, and most people don’t. this is probably the third time i’m seeing the movie, and the first time that i actually enjoyed it.

but that’s the point. this joke and this movie are not for the mainstream. you have to get past all of the disgusting parts, and think about it in terms of the creativity of the storyteller. anybody in the world can talk about the family sliding through feces and rubbing it all over each other, but it’s the energy of the comics that keeps the ideas flowing at rapid speed, as more and more terrible things happen, one after the next.

the movie begins with talk of how the joke came about, and the parties that chevy chase used to throw, where an elite group of people would sit around a living room and listen to each other tell this joke. after that, we get right into it, hearing the joke. each comic not only tells the joke, but also talks about how you have to tell it, and what they always try to include in it. each comic explains how they take the joke and make it their own.

what works is that many of the comics do have a way of making this different. sometimes it’s physical (two comics stand on top of each other, juggling flaming bowling pins while they tell it, another uses a deck of cards and the specific cards he pulls out of the deck coincide with what’s happening in the story), other times it’s personal. sarah silverman, for example, makes the joke about her and tell it like it is something that really happened to her.

one thing that adds to the movie is whenever it goes off on a small story tangent and tells us of a specific time when the joke was told. a great example comes towards the end of the movie, with gilbert godfried at hugh hefner’s roast. it isn’t so much the joke itself or the way godfried is telling it that’s great, but the story that surrounds him telling it. it was right after september 11th and he started making jokes about the planes. the crowd was booing him, yelling too soon, and that’s when he broke into it. at a time when he was already being super offensive, he found a way to be offensive with a totally different kind of joke.

the movie isn’t great, because after all, it is one joke told over and over again. yes, it is impressive how many different ways there are to tell it, but after a while you want something new, and this movie has only a little to offer in that area. it is wise to save the more well-known comics like bob saget and silverman for the later part of the film, but not enough to keep the movie feeling fresh. it is an interesting experiment of a film, and a lot of it does work simply because these are funny people who know how to deliver a joke. and every once in a while they pull another joke out, that has nothing to do with The Aristocrats. those moments are a welcome change. the movie is unique and creative, but it does get kind of tiresome after hearing the same thing a few too many times.