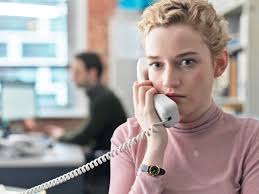 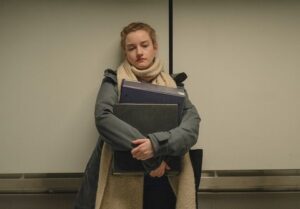 A somewhat interesting premise for a movie that just never really goes anywhere.

This is a movie built around an interesting enough premise that just goes about handling it all wrong. The premise is a Harvey Weinstein-like work environment, where an older studio head boss is taking advantage of younger women. Only we don’t really see that. The movie isn’t told from the point of view of either the aggressor or the victim. It’s told from the perspective of an outside person looking in, making observations, and not really seeing a whole lot. The movie mainly consists of our protagonist doing trivial things around the office, hearing snippets of conversations, and trying your draw conclusions. The movie is uneventful to say the least. There is only one decent scene and conversation in the entire film. There should have been a whole lot more.

Here’s the thing about The Assistant… is it social commentary? Of course. Does it have a worthwhile idea and potential? Absolutely. But for some reason there’s no follow through at all.  Pretty much nothing happens. And maybe that is commentary in itself to show us how often these stories get buried, covered up, or thrown by the wayside, but c’mon. Who wants to see a movie about that. We go to the movies for spectacle. We go to see stories that we don’t see every day, happening on a regular basis. And the Assistant simply gives us one of those everyday stories.

The movie tells us the story of Jane (played by Ozark’s Julia Garner,) an administrative assistant working in the office of a big shot studio head kind of boss. This is a harassment story, only it isn’t. You see, Jane isn’t the one being harassed. She’s not the friend of someone being harassed. Nobody confides in her about anything. Jane is simply a person who sees whet she thinks might be something, and has suspicions. And her suspicions aren’t even that anyone is unhappy with the situation or being treated in a way they don’t approve of.

The movie spends a full day in the life of Jane, from before dawn all the way through night time. During this day, we learn that Jane has been titling in this office for only five weeks. She arrives early, while it is still dark outside, sbf starts setting things up, preparing things in the kitchen area. At one point, the boss’ wife calls the office looking for her husband or for answers about where her husband is. There are two male assistants who are working in the office alongside Jane, and they ask Jane to take the call.

Jane answers the phone, to a very angry and suspicious wife. It’s not easy to hear much of anything being said by the wife, and that’s actually a pattern with this movie when it comes to Jane taking phone calls. During the course of the film, she gets two phone calls from the boss, and again, we can only make out a little of what is being said. Clearly that’s done intentionally, to make the movie feel more realistic in the sense that when someone is next to you on the phone, you often can’t hear too clearly what is being said on the other end of the line. But this is a movie. Sacrificing some realism to make a better experience for the viewer should be a priority. Especially when the movie has so little to offer in the ways of interest, as it is. This is not unlike the Christopher Nolan film, Tenant, where characters spoke through masks, making their dialogue hard to hear in a movie that was already super confusing as it was.

What we can make out, however, is that the wife is unhappy with Jane’s responses, of her not knowing where her boss is. And not long after that, the boss calls Jane, yelling at her (again, it’s hard to make out the words, but we certainly understand the tone.) Obviously he wanted her to cover for him and say that he was there in a meeting or something like that. And so Jane writes him an apology email.

The next thing that happens is a woman shows up to the office claiming to be one of the new administrative assistants. She tells Jane she is from out of town, and that the company is putting her up in a hotel. And Jane is asked to take this woman over to the hotel and help her get settled. Jane shares a limo ride with her there, and during that ride, the woman asks Jane if they put her up in such a nice hotel when she was hired. Jane tells the woman that they didn’t put her up in any hotel at all.

And this is what sets Jane off. She becomes convinced that her boss is having an affair with this woman, which he probably is. After all, the women is very young and naive and innocent. So Jane goes to Human Resources to file a complaint. And here is where things get a little too extreme. Granted the human resource scene is the best scene in the movie, and the only scene of real interest. But there are so many reasons why Jane going there is a bad idea.

First off, she doesn’t actually have evidence of anything. All she knows is that they are putting the woman up in a nice hotel, and that the woman is young and inexperienced. Secondly, even if the boss is having an affair with this woman, none of it is Jane’s business. The woman is an adult and can speak for herself. Only maybe Jane thinks this woman doesn’t know what’s happening. She doesn’t know that her boss has other intentions for her, and Jane wants to help this woman out.

All of that is fine. But going to HR is most definitely the wrong move. Have a conversation with the woman. Ask her what she thinks and if she knows what is happening, and if she’s okay with it. But instead of doing any of that, Jane goes to the people who work for the studio boss. And of course the HR guy discourages Jane from filing a report. He says he will do it for her if that’s what she wants, but strongly advises against it. As much as this whole thing is ridiculous, the HR scene is the only one where anybody is actually addressing or discussing what is happening. So it is by far the best scene in the movie, but that’s not really saying much.

The Assistant is a movie that was made to feel as indie as possible. And it most certainly does. What we have is a movie that thinks it’s artistic because it is simple and realistic, and an everyday kind of film. But what it is giving us, in actuality, is a movie where basically nothing happens. A woman goes to work, does trivial things around the office, has some suspicions, goes to talk to someone about it, and the movie ends. Had it taken these ideas into other directions and even just given us a few more conversations about what was happening, this could have a much better film. But it is content to leave things as they are and not do very much, trying to make the point that this is what happens. People notice things, but then turn their backs, and nothing gets done about it.  We all know it’s true, but that doesn’t mean it makes for a good movie.