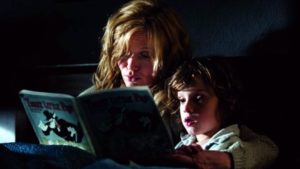 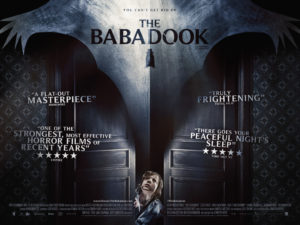 A pretty cool horror movie about a family being terrorized by a very unusual being.

Here’s a creative litter gem of a horror movie. The premise, about an evil spirit that haunts a house, is familiar enough. But it’s the characters who give this movie that extra edge that most horror films are missing. The hero is a little boy with an Australian accent who makes weapons to take the spirit down, in his spare time. And when a book shows up on his shelf, filled with a truly frightening story and some crazy images, the thrills really begin. The movie gets a little too unstable by the ending, but for most of the way through, it’s a lot of fun.

The Babadook is a fun movie. It’s an Australian horror film, and in many ways it’s similar to other movies in the genre that we’ve seen before. There’s a strange creature making noises and slamming doors in the house, and there are even moments when the creature posses some of our characters. But what makes this movie special is the unique Australian tone, and way that it is set around the life of a very creative boy who discovers the legend of the Babadook and doesn’t want to let it go.

Sam is an unusual boy from the very beginning. He lives with his mom, Amelia, and never met his father, (who dies while driving Amelia to the hospital, when she was delivering Sam.) He’s a boy who makes strange weapons and then brings them to school. This, of course, gets him into a bit of trouble. Sam is having issues and it is mother who has to take the brunt of it, being called into school to meet about his behavior, and not being able to get any sleep unless Sam is asleep too.

One night when Amelia asks Sam to pick out a book for her to read, he brings her a large picture book called Mr. Babadook. The book is a pop up and tells a disturbing story about a family who the Babadook comes to visit. The pictures are vivid and artistic and are all done with a black and white charcoal color. When Amelia asks Sam where he got the book, he insists it cane from the shelf with all of his other books. And so the two of them go on their way.

Amelia takes Sam to the birthday party of her niece. Sam goes up into the treehouse with the girls where the niece goes on a teasing rampage about how Sam doesn’t have a father. This prompts Sam to push her out of the treehouse, where she breaks her nose. It also leads to Amelia’s sister telling her how much she hates Sam and that the reason they’ve been so distant  isn’t because she doesn’t like Amelia, it’s because she doesn’t like Sam.

At this point, Amelia is pretty down on Sam, and feeling awful about her son. And then it gets worse. On the way back home, while in the car, Sam has a seizure. He is taken to the hospital, and the only good thing to come out of this is that Amelia is able to get sedatives from a doctor so that she can actually fall asleep. Sam gets treated and comes back home, and things seem like they might start to get a little better. But then the book shows up again.

After reading it the first time, Amelia tore the book up and threw it away. Now it is all taped back together, and on top of that, there are new pages which have been added. One shows Amelia (or a woman who looks like her,) killing their dog. Another shows her holding a knife at Sam, (a boy.) Amelia can’t believe it. This must be some kind of sick prank. She burns the book and then goes to the police.

The problem is, when she gets to the police station, she has no evidence. Without the book, this entire story seems like it just might be in her head. The police tell her that and show signs of not believing her, but what really throws Amelia off is that the jackets hanging up in the precinct office are similar to those worn by Mr. Babadook in the book. Amelia takes this to mean that the police are working with The Babadook, and she runs away.

Back home, The Babadook now comes out at full force. He slams doors and makes noises at night, and his voice rattles in the air, saying “Baa Baa Baa Dook Dook Dook.) It’s kind of funny, but also plenty creepy. And he causes Amelia to have visions of her husband, who seems to be working with or for Mr. Babadook. He tells Amelia that he will come back to live with her again if she just brings him the boy. But Amelia doesn’t have the chance to even think for herself, whether or not she believes her husband, and these visions. The Babadook takes possession of her before she even has a chance.

And now comes our climax, where Sam faces off against he mom, who is possessed by the evil spirit. He comes at her with all sorts of homemade weapons, and ends up not using any of them. He finds another way. And that leads us to the ending, which is as strange and oddly funny as most of the other parts here. This is a very dark, black comedy, and the ending does not disappoint.

The Babadook is a movie, like some of Taika Waititi’s New Zealand films, that really benefits from the accents of its characters. Just hearing this boy and his mother talk about the Babadook is hilarious, with Sam believing that everything that goes wrong in the house is caused by this evil spirit from the book. Sure, the premise isn’t anything all that unique, but the way it is handled here is superb. This movie finds a way to get creative while tackling familiar territory, and it definitely pays off.