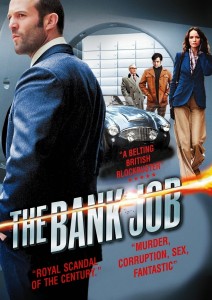 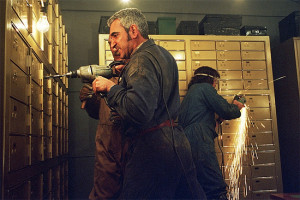 A thrilling heist movie that seamlessly combines british street thug comedy in it’s first half with gritty gangster violence in it’s second half.

The Bank Job is shockingly a very good movie. I say shockingly for a number of reasons. First off, jason statham is the lead, and he’s really carved out a career for himself of b movies that are all just lousy action films with done plots. from the transporter series to the crank movies to movies like war, he hasn’t carried a decent movie since he broke out back in 1998 with lock, stock, and two smoking barrels, and then snatch. and it’s by going back to those sorts of movies that The Bank Job ends up finding a tone that works.

the movie feels like a guy ritchie film. at least in it’s first half. it is filled with the humor and thug life degenerates that occupied those earlier ritchie films. but then as it goes on, the plot gets more gritty and gruesome and comes to resemble something more like Layer Cake, Matthew Vaughn’s breakout picture as a director (Vaughn produced Lock, Stock and Snatch before going it his own and directing). so The Bank Job really is a combination of Lock, Stock and Layer Cake, which is a pretty amazing thing. it’s the movie that finds the middle ground between both of those films.

At the start of the movie, we see a lot of characters and scenes that don’t necessarily make sense to us at the time. we know what we’re watching, but we don’t know how it has to do with anything. so, for example, we watch a secluded beach on a tropical island somewhere as three people engage in sexual activity both on the beach and then in a house right off the shore. then we see a beautiful woman, martine, being arrested at an airport for smuggling in drugs. we also meet members of the mi6 british intelligence who are trying to chase down photos of the princess having sex. and we meet michael x, a black panther-like revolutionary, who puts a spiked slave collar around a local landlord’s neck, and can’t be prosecuted for it because of the photos he possesses.

we meet terry (statham) working as a mechanic in a car garage as a couple of thugs come up and smash in some car windows because he owes them money. there’s some comedy here, as statham tells the thugs what people refer to them as, but ultimately the scene is meant to show that statham needs money bad.

That’s when Martine enters the picture with a proposition for Statham. she wants him to rob a bank vault. she tells him about how she knows a guy who works there and has told her about how the trains were setting off the alarms, so now the whole system has to be rewired, and until they get to it, there will be a number of days where the vault has no alarm system at all.

Terry goes to work, picking his guys and setting up the operation. the details behind how everything is handled are meticulous. they rent out a store called le sac which is two doors down from the bank. then they start digging a tunnel underneath it. i love how there’s a chicken restraurant in between them and the bank, and we see inside the restaurant as the walls start shaking from all the underground drilling.

Getting into the bank vault is only half the fun. another part of it is that the police have gotten word of the raid from a radio operator who overheard their lookout man talking to them over walkie-talkies. so now the police are trying to figure out which bank it is, sending an ambulance around to each bank, hoping that when it shows up outside the door, the criminal lookout man will warn them this way the police will know which bank it is. it’s a great idea, and the movie has fun with what ends up happening as a result.

Another thing great about the movie is how many different parties are involved. there’s michael x and interest that he represents. his crimes and the pictures he uses as blackmail so that he can’t be persecuted are the reason for this whole thing. then there’s the porn king who advised michael x to take out a box in this bank vault and is now on the hot seat as well. for him, all of his payoffs to police and public officials were listed in a book that he kept in the bank vault. then there’s the mi6 team, including a middle man who works for them, but is also seeing martine. he’s the guy that put her up to the job. and then there’s the police.