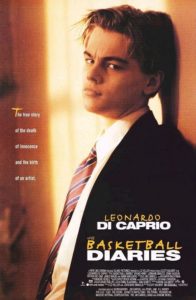 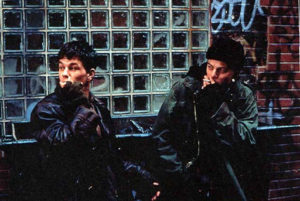 An incredibly depressing movie, this one chronicles what is basically a non-stop downfall of a promising teen basketball star-turned drug addict, and how his whole life got turned upside down.

One of Dicaprio and Mark Wahlberg’s first movies, captures the two leading men when they were teenagers playing high school kids. The movie is about how they are stars of an undefeated basketball team who run around doing drugs and getting into trouble when they’re not on the court. When things start to spiral out of control for them, involving their drug use, they find themselves getting deeper and deeper down the rabbit hole of despair. The movie is about their downfall. It is about addiction and what happens when you lose all sense of self-control. It is entertaining, but also depressing in a way similar to Requiem For A Dream. That movie might be a little worse, but this one is right up there with really showing some of the horrors of drug addiction.

Second only to Requiem For A Dream as the most depressing drug related film, this movie chronicles the downfall of a rising basketball star in high school who seemingly had it all. Jim Carol (Leonardo DiCaprio,) was living the life. His team was unbeatable, he had a group of friends that kept in constantly laughing, and he could get any girl he wanted. But along with all of that surface level material came everything that was going on behind the scenes. That really began with the opening moments of Jim in his bed writing, and a crazy neighbor shouting curses right outside his window, breaking his concentration to the point where he just couldn’t get away from it. This was only the beginning.

From there, we see a scene at school where Jim is being paddled over and over again by a Catholic School Teacher who clearly has it in for him. At this point we realize that life isn’t so great for Jim, despite appearances. And yet this is the best his life will be during the course of the movie. At least he has the skills to play basketball, and the social skills to develop friendships with a local pickup player on the street courts (Reggie, played by Ernie Hudson,) and maintain friendships outside of his small circle (he is the only one in the group who goes to visit their mutual friend, Bobby, in the hospital who is dying of Cancer – played by Michael Imperioli.)

Jim might be a star on his basketball team, but he lives a very gritty street tough lifestyle. That means he and his friends rip off the other teams they are playing, (their team manager and friend Pedro sneaks into the locker room, picks the locks, and steals from the players during the game.) It means they have fist fights with the other team members that amount more to beatings. And it means they sniff drugs. We see this for the first time early in the film, as the boys ride the Staten Island Ferry.

The group is made up of four guys. There’s Jim and Pedro, but there’s also Mickey, who is like Jim’s number two, (played by Mark Wahlberg,) and Neutron, the member of their group who takes the high road. Neutron does drugs with the guys in all of the early scenes and is involved in the fights. He’s even there when the guys decide to rip off an old woman who is walking along at night, and Mickey ends up throwing her to the ground and kicking her repeatedly. But at a certain point in the movie, (right before the game where the guys lose it,) Neutron decides to cut ties with the group. It’s a powerful moment and sequence, involving them not being able to tell which pills are uppers or downers, and clearly choosing incorrectly. This leads to them all being kicked off the team and suspended from the school.

Even before that, however, things were bad for Jim. Starting with the death of Bobby, things got especially rough, and Jim started turning to heroin. It isn’t especially easy to trace the evolution of his drug habit throughout the film, since he is doing drugs from the very beginning, but a clear marker is the point where Neutron decides that the guys have gone too far and crossed a line. Before that, one scene that showed Jim’s evolution with drugs involved two girls that Neutron introduced him to, Winky and Blinky, who lived in a nice NYC brownstone. The girl that Jim was getting with asked him to try cocaine, and you could see his hesitation before giving it a shot. By the next morning, however, he was doing more of it, while the girl who pushed it on him was fast asleep in the bed beside him. Clearly this guy gets addicted easily.

And then, leading up to the disaster game, there’s the moment in the locket room where Swifty, the coach (played by Bruno Kirby,) comes on to Jim. It’s not just an offer of money or a kiss he’s going for (although those things happen too,) but he actually gropes Jim. As disgusting as this moment is, it’s a foreshadowing of things that are to come, as Jim will end up becoming a sort of prostitute himself, giving his body away to older men in subway mens rooms, later on. But before he gets that low, while he still has some dignity, Jim pushes Swifty away. Then comes the basketball game, which is perfectly set to the Doors song “Riders on the Storm.” And the rest is history in terms of the boys’ being at the school.

If this marks the end of the first half of the film, then the second half is a straight downward trajectory. The guys become heroin addicts living in drug dens underground. In one moment that shows how strung out they are, the three of them steal a car and try driving it to a guy who has offered to take it off their hands for a nice price. Pedro is the driver and he constantly falls asleep at the wheel. The guys finally get the car to where they are meeting the buyer only to see it get taken away by a tow truck for being parked at a sign that clearly says no parking. Mickey gets his arm broken as a punishment for all of this.

As the film goes on, we see the downfall of each individual character. First is Pedro. He loses it at a candy store that the three boys are robbing, and when Mickey throws him to the floor, Pedro doesn’t get up. As the police are coming into the store, Pedro is still lying there, unable to move. That marks his end. For Jim, things take a positive-looking turn when his old buddy Reggie finds him, takes him in, and is willing to sit with him and help him on the road to recovery. That means many hard days and nights of screaming and depression and lots of pain. The movie doesn’t sugar coat any of this. And things seem to be going in the right direction. But as soon as Reggie leaves the apartment to go to work, we learn that Jim’s “good behavior,” was all an act, and he is right back to where he was before Reggie found him, robbing and trying to score drugs the first chance he can get.

At that point, Jim finds Mickey again and together they try to score drugs. When they get ripped off, it leads to a foot chase where Mickey ends up on a roof with the guy who hustled them and accidentally knocks the guy over the side. He’s now a murderer. And when Mickey runs out of the building he is grabbed and beaten by the locals on the street until the cops arrive and lock him up. Now it’s just Jim, by himself. We see how the tables have turned for a girl who used to be the biggest addict on the block, Diane, (played by Juliette Lewis,) and how she seemingly found a way to get her life together. But for Jim, things are still going south when he shows up at his mother’s place, which ends up being the last straw before he too is taken in.

This is an incredibly dark, deep, and gripping movie. Like Requiem, it is depressing, but it is also incredibly powerful. It’s also the first major movie of Leonardo DiCaprio and Mark Wahlberg’s careers. This was their breakout, the same way that Good Will Hunting was for Matt Damon, (also a movie about a street tough kid who gets into fights, hangs with his buddies, and gets sent to jail.) The difference is that movie wasn’t about drug addiction and spiraling down, and those two things really define the Basketball Diaries. It’s not an easy movie to handle, since the whole story seems to be headed in one single direction and things just keep getting worse. But it is a hell of an interesting film.