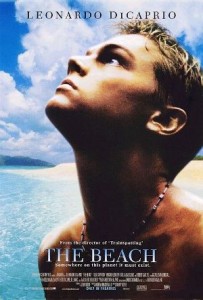 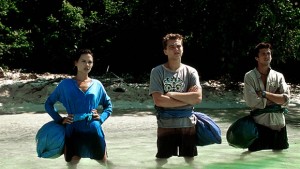 An interesting film loaded with beautiful scenery yet lacking any kind of real conflict in it’s story for most of the film.

The Beach is an okay movie. it’s not bad, and that’s because while it doesn’t have the components of a good and interesting movie, it has a whole ton of other things going on that kind of distract us. first and foremost is the scenery. the movie takes place on a secluded and secret island (puket, in thailand), and just spending time around the back drops is enjoyable. after that would be the writer-director team of john hodge and danny boyle. together they made trainspotting. then boyle went on to direct 28 days later, slumdog millionaire, and 127 hours. he is a very talented director, and one who knows something about putting movies in strange locations (India, a dessert canyon). one might say that The Beach and it’s thailand locations were his warmup exercises.

It’s by no means a great movie, and that’s all due to deficiencies in the plot. still, the movie is kind of fun in a sort of b movie kind of way. the plot might not delve into conflict or mystery or anything where we can see a clear path ahead, but that’s okay. this is a movie that is just content to be. and we’re okay with that because we enjoy spending time with the characters, who are certainly flawed, and being on this island, living in this strange sort of cast away lifestyle with them.

the movie starts out with richard (leonardo dicaprio in his first starring role following titanic), in thailand telling us with voice over that he just had to get away. he was searching for escape. what he had to get away from and why he was searching for escape are never explained. there’s nothing in this movie about richard’s former life, or his family, or who the character was. no back story, no flashbacks, nothing. and i know that’s very intentional, but still, it’s kind of strange. i mean, you can’t just start a movie from scratch. and yet this movie sets out to prove you can.

So richard goes from place to place seeking a thrill, which really just means drinking snake’s blood and hanging out in a seedy motel next to a french couple that keeps having sex. but then one day a guy shows up in his room, asking him if he wants to have fun and showing him a map of a secret island. that guy (trainspotting and the full monty’s robert carlyle) ends up dead almost as quickly as he popped up into richard’s room. but he left the map behind and so richard consults the couple next door, asks them if they want to go seeking adventure with him, and gets them to come.

Now richard and the french couple, francois and etienne, start traveling from island to island, trying to get close to this secret spot. richard has no problem telling anyone he comes across about it and even leaving behind maps. his voice over says that it’s the traveler’s code, to pass on something to the next person who comes along, and it makes sense, but still doesn’t seem like a good way to keep a secret.

the three of them end up as close to the island as they can get from traveling by plane or boat. and they decide to swim the rest of the way, which means dealing with the threat of a shark. this will come into play once again a few more times later on in the story. when they finally make it onto the island, they walk right onto the fields of machine gun toting “farmers,” and have to run and hide in order to avoid the possibility of being shot.

richard and his friends end up joining with a community of people who live there, on the other side of the island as the farmers, and have a truce with those armed men. the truce states that’s the farmers will let them live there in peace just so long as no more people come to the island to join them. the farmers are growing marijuana and opium plants and don’t want to risk getting caught. the group that richard and his friends join with make the exception to allow the three of them in, but absolutely say no more people.

and now the movie starts to get a little slow. there are affairs and relationship issues, but nothing of the action, life-threatening extent that we came to believe this movie might be about. there’s richard and etienne, richard and sal (tilda swinton, as the leader of the group), and a shark attack where richard comes off as a hero. there’s also a situation where one guy gets bit and the rest of the group has to decide what to do with him. their decision is pretty fascinating.

but conflict does finally come. it took long enough. in the last quarter of the movie we at last get some real conflict involving those machine gun toting farmers. the movie has kept us waiting for a while, but it eventually delivers. that’s pretty much the story of this movie. there is no essential conflict that covers the span of the film, or anything close, but by the end, we do at least get something.

the movie might not have a real conflict for most of its duration, but it still manages to never be boring. that’s because the situations that do occur are strangely interesting. especially in the way they are handled. first is the way etienne’s boyfriend handles how is girlfriend acts, and then is the way the group handles their injured team member. there is also a sequence where richard is forced to go it on his own and loses himself in the process. it’s all creative and different, but still the movie is missing a lot. no back story. no central conflict. it’s a wonder this movie turned out as good as it did.