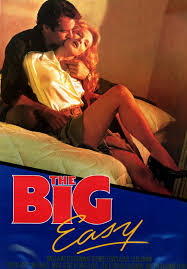 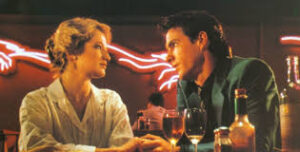 A pretty routine 80s mystery that doesn’t find the right tone, as it tries to balance comedy with thriller and doesn’t really succeed  with either.

Talk about a movie that doesn’t hold up, understanding how this film was seen a critical darling back in the mid-eighties when it came out is the real mystery here. It goes to show just how far we have come since then and how much better the thrillers got, starting in the nineties when film noir was firing on all cylinders. The Big Easy is a murder mystery that wants to also be a romantic comedy. And those two genres don’t really mix. The first half is all fun and games, and then in the second half, the mystery comes front and center and becomes the dominant component of the story. That second half is where the movie finally starts to get interesting. It never gets great, but at least in the second half, the movie shows that it actually cares about the plot, and not just the goofy characters and humor.

The Big Easy is an eighties movie that most definitely does not hold up. It’s remarkable to think that this movie was considered something special when it came out, as both a thriller and an interesting character study. The critics loved it, and the fans generally were in favor of this one more than Dennis Quaid’s other suspense thrillers made around the same time, (D.O.A. and Suspect.) But the movie doesn’t exactly have edge. Instead, it’s a goofy cop film disguised as a mystery. This movie wants to be taken seriously by the end, and pretend that it was a thriller all along, yet in actuality, it’s filled with bits that are meant to be comedic. Not that they are very funny or anything, but what the attempts at comedy really do is give this movie a silly tone and take it out of the suspense sandbox, which is apparently where it wanted to be playing in.

The movie takes. place in New Orleans, a city that is known as “The Big Easy,” a saying that is repeated about three times in the first ten minutes of the movie. It gets to the point where we are saying, “we get it already,” and “they better not explain this one more time.” And that’s just a minor example of the lack of intelligence here. Say it once, great. Twice, okay. But three times and you’re going too far. The story is about a detective, Remy McSwain (Quaid) who is working the murder case of a gangster, who was found in a fountain. McSwain knows who the gangster is, and who he worked for, and wants to just write the case off as gang violence, where it doesn’t really matter who killed him. “One less scum bag on the street,” that kind of thing. In fact, a line like that even gets said by one of the characters.

The only problem is that there’s a goody-goody district attorney hanging around, Anne Osbourne (played by Ellen Barkin,) who wants things done to a T. She wants the case taken seriously and isn’t about to let these goofballs screw it up. Osbourne shows up at the. crime scene every time there’s another murder, and the next day after this first body is found, she shows up to the police station demanding answers. Remy, meanwhile, is one of those laid back detectives who likes his job and likes his life and doesn’t want to even think about changing those.

He’a connected in town everywhere he goes, and is able to use money from a police fund for widows to pay for the college of his kid brother (Remy’s father was a detective who died on the job, and so his mom should be getting the money.) Aside from the connections in town, Remy is also connected on the force, because of who his father was. Many of the people he works with knew and worked alongside his father. One of these is Jack, played by Ned Beatty, as Remy’s sort-of mentor. Jack was most likely the partner of Remy’s father, and now Jack is having a relationship with Remy’s mother. And Remy’s fine with all of this, so long as he gets to keep living the good life of being a cop, getting treated to free things everywhere he goes, and getting thrown extra cash around town, through people who are trying to bribe the police.

After that meeting at the precinct between Remy and Anne, he asks her out to dinner. Anne is not interested, but Remy tells her that’s the only way he’s going to give her information about something, and so she goes along. Then he invites her over to his place, again acting like the reason is so that they can discuss the case more. And of course he ends up kissing her when she doesn’t expect it, and the two of them have sex. It’s meant to be steamy, but it’s actually kind of creepy compared. to today’s standards. Especially when you consider that clearly this guy was forcing himself on this woman all night long, until she finally gave up and gave in.

At this point, though, it does seem like Anne might be opening up a little, letting loose, and starting to actually like Remy. And then Remy goes to a bar to accept a bribe on behalf of the police (one of his colleagues asks him to go to make the pickup,) and it turns into a bust. The cops are there waiting. They get the whole interaction between Remy and the bartender on camera. And it’s up to the district attorney to prosecute. That means Anne. Now, you would think that she would remove herself from the case considering that she has been sleeping with the suspect. Even if she didn’t want to admit that, she could say that she has been working with him on a case, and that experience means she can no longer be objective. But instead, she prosecutes him, in a situation that is totally ridiculous. Among other things, if she did win, Remy could have the whole thing thrown out and declared a mistrial by exposing their relationship.

The arrest and trial of Remy feels like it’s part of a different movie. A romantic comedy where the two leads hate each other in the beginning, but then of course wind up together at the end. It has nothing to do with the murder case they are trying to solve, and is a complete diversion from the overall plot. And that shows you how serious these screenwriters are taking the murder story. In fact, the first half barely gets into that plot. The murders happen, sure, but the characters are more interested in flirting with each other than they are in solving the case. When Remy takes Anne out to a restaurant for crawfish, the chef comes out and tells Remy, “you know your money’s no good here.” This gets Anne’s attention who appears shocked that Remy is accepting free food. To her, this means he is “on the take,” and corrupt.

In fact, the movie is very much about Anne getting Remy to change his ways. There is definitely character change all over this movie, and it ever includes Remy going in to the room where the guys who run the payouts for the police are counting money and tells them that he doesn’t want to be on the take any longer. Kind of funny how casual all of this is, including the guys just sitting there, casually counting the money before dividing it up. The character study portion of the movie is about Remy’s change, and it is a little to obvious and too forced.

And then there’s the mystery. Now, the movie doesn’t actually develop into a mystery until about halfway through. Before that, it is much more interested in being a romantic comedy. That includes countless scenes that have nothing to do with the mystery and are all about the relationship between these two characters. In one moment, for example, Remy has Anne picked up by a police man, told she is under arrest, and really brought over to the party he is being thrown, for getting off trial. And how did he get off trial? By the police tampering with evidence and destroying the tape of his taking the bribe. But the mystery does kick back into gear in the second half, starting with the murder of a guy named Big Daddy, a black gangster who thinks the police are behind the murders.

There are no major clues to solving this mystery or major revelations, but the movie does give us eventual answers by the end. The second half is better than the first, because it’s in the second half that the movie actually takes the mystery seriously. The problem here is that this movie wants to do too much. It wants to be a romantic comedy and  a character study, but also a thriller and a mystery. The combining of these very different genres doesn’t work. It means that one story is taking away from the other, and in the first half, the one that loses out is the mystery. Remy’s character is not very likable and that hurts the movie, but the uneven tone hurts it even more. There are some redeeming elements here along the way, and Remy’s character does grow on you a little, but for the most part, this one doesn’t work.