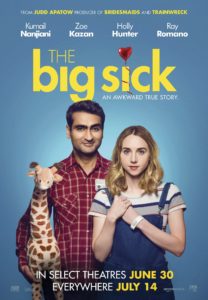 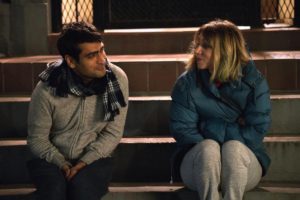 A movie that is both funny and touching, this one works on multiple levels.

An absolutely magnificent film, The Big Sick is incredibly funny and moving. It is creative and powerful, and really does just about everything right. This is the story about Kumail, a standup comic who is trying to navigate through a life characterized by his cultural traditions and how they seem to be the only way. It takes meeting a girl named Emily, and going through a pretty unique experience with her, to get Kumail to see otherwise. That experience is that Emily has an extreme medical condition, where the doctors have to put her into a  coma, just to operate. Kumail is the one who has to help. Only he and Emily have just broken up. That makes for an awkward situation all the way around, be it between Kumail and Emily, Kumail and his parents, who insist he marries a Pakistani girl, and Kumail and Emily’s parents, who know everything about their relationship and don’t exactly like Kumail. What we get from all this is a very powerful, smart, and incredibly funny film.

The Big Sick is a truly excellent movie. It’s rare to find a film that is both extremely funny and also pretty powerful in terms of storytelling. This one tells a unique romantic-comedy-esque story that in many ways feels like a romantic drama. You see, romantic comedies tend to follow very simple formulas and cliches. The characters keep secrets from each other, find out about the secrets, break up, and then get back together. And that’s pretty much it, as far as the plots go. The nature of the secret they are keeping is the only thing that separates that particular movie from every other romantic comedy in the world. And sure, those secrets can sometimes get pretty interesting, (in Shakespere In Love, for example, a girl was pretending to be a guy,) but at the end of the day, there’s the secret and that’s it. Otherwise it’s the exact same movie as every other movie. But The Big Sick really is something different. It’s about a girl who is in a coma, and a guy who has to reevaluate his life and figure things out before she wakes up. It’s about a relationship where the thing keeping the characters apart is absolutely not how they feel about each other, or anything like that. It’s their family, culture, and traditions, as well as the consequences for going against them.

Like those other films, there is a secret here, (there’s almost always a secret,) but this movie, unlike those others, has much more going on than just the secret. The whole coma plot, for example, has nothing to do with the secret. In talking about movies that stand out from others in this genre, there are two movies that come to mind, worth mentioning here. One is Knocked Up, simply because unlike those usual romantic comedies and cliches, there is no secret there. Yes, the characters have a fight and go their separate ways, but neither one of them is hiding anything from the other. And the main reason why that’s worth noting, is because Knocked Up is a movie written and directed by Judd Apatow. He’s the smartest name is the comedy business today. Apatow produced this movie, the Big Sick, and you can feel his fingerprints all over it. Specifically in the decision to make The Big Sick R rated, and to earn that rating with a ton of well-placed and well-delivered curses,  not holding anything back.

The other movie worth mentioning is While You Were Sleeping, simply because it is also a romantic comedy about a person in a coma and how the lead character, (the one not in the coma,) spends time with the family of the patient, getting to know them well, while the patient is asleep. But unlike that movie, where the whole relationship was built on a lie, (where the girl never actually knew the guy who was in the coma,) The Big Sick doesn’t have any gimmicks up its sleeve. It’s not a one-noted film. Instead, this is a very direct and from the heart kind of movie. This is a film where two people really do fall in love, and then have to face a ton of obstacles on the bumpy road of family, culture, and reality, in order to even attempt to find happiness.

Kumail Nanjiani, (from TVs Silicon Valley,) is playing himself here, in the real life story of how he met his wife. At the start of the film, he’s a standup comedian doing shows at late night comedy clubs in Chicago, where he talks about his culture and how different it is from American culture. This is a perfect way to begin the movie, since so much of this film will be about Kumail’s Pakistani culture and how it appears to get in the way of his wants and happiness. We meet Kumail’s friends, who are all a bunch of stand up comics as well, meet his family, and watch him work as an Uber driver, picking up random strangers. The family is the most interesting dynamic to note here. Kumail has a brother, Naveed, who is married to a Pakistani woman, and who found his wife through an arranged marriage. This is, in fact, how all marriages are formed in Pakistani culture. There are at least two jokes about this in the movie… how in Pakistani arranged marriage is just called “marriage,” and anything else is called “love marriage,” and is worse than committing a crime.

There is dinner table talk with the family about how one of Kumail’s cousins married a white woman and had a child with her and is now cut off from the entire family. And at one point during the meal, the doorbell rings and a young woman shows up with the mother answering the door and then brining the woman to the table, announcing that she “just dropped in.” The woman is there to meet Kumail. Apparently young women, in this culture, do this, showing up at houses, meeting whole families at once, and even leaving photographs with the guy, that look like headshots, or resumes. This is the tradition, to the point where Kumail keeps a cigar box full of the women’s photos, and knows the exact words that will be said when the mother announces the woman she is brining over to the table. Throughout the movie, we will see many other situations just like this, each one funny in its own unique way.

The real storyline, however, is about Kumail and Emily, a girl he meets at one of his comedy shows when she is in the audience and woo-hoos from the crowd that she is from Pakistan, (which of course, she is not.) Kumail goes and talks with her at the bar afterwards and they strike up a connection. Then they go back to his place and sleep together. What is worth noticing, right off the bat, is that the movie doesn’t try to cut any corners, the way that most other films do. When they go to his place, for example, we don’t just cut to them making out. We get to see the whole situation, from them trying to avoid the roommate who likes to engage people in conversation, to Kumail putting on a movie for them to watch, and explaining to her a little bit about the movie. They even have a conversation about the type of mattress he has, and discuss whether it is a shoes on or shoes off bed. This movie is very real. There’s a scene later on, where Emily doesn’t want to go to the bathroom in Kumail’s place because she has to poop and is concerned about the smell. You don’t see this kind of thing in movies. Ever. But a comedy written by an observational standup comic is the place where you might actually find something kind of unique, (the last one we got was Trainwreck, written by Amy Shumer, and great as that movie was, this one puts it to shame.)

We follow Kumail and Emily through multiple dates, and learn their rule about not seeing each other for at least two full days in between each date. We watch them do everything they can to avoid falling for each other, (including promising that they won’t see each other again, after both the first and second date.) Nothing works. These two have a connection and are really into each other, and there’s no getting around that. There’s a great scene at a party where they even profess how they feel about each other, saying “I’m overwhelmed by you.” When Kumail says it back to Emily, it doesn’t go over quite as well. And then the family starts getting brought into the storyline. Emily wants Kumail to meet her family when they are in town. Kumail doesn’t want to. And it isn’t long before she finds out the reason why.

Emily finds Kumail’s cigar box. She learns about his culture. She learns that he has not even told his parents about her. How can he, when it will mean potentially losing his family all together? They break up, and here’s where this movie is different than every other romantic comedy… the breakup happens in the first half. That means there’s still more than half of the movie to go. In all those other films, the breakup and then the getting back together are the final two acts. Here, the breakup is just the beginning. Kumail gets a phone call from one of Emily’s friends, one night, that she is in the hospital and that he needs to go there to be with her, and that’s when he learns about her condition.

Emily has some infected tissue that the doctors need to perform surgery on, and in order to do that, they need to put her into a medically induced coma. Kumail goes and signs off so that it can happen, and then he sleeps there in the room. When he wakes up, Emily’s parents are there. They know all about Kumail and his breakup with their daughter, and they don’t exactly like him. Watching him win them over, little by little, is one of the definite highlights of this film. The parents are both fantastic. Holly Hunter and Ray Romano play the couple, and you couldn’t ask for better talent. Romano in particular is a standout as a guy who always says the wrong thing at the wrong time, but does it in such a way that you completely understand where he’s coming from.

The movie takes us to some pretty unusual places, including a standup performance with Emily’s parents in the audience. The plot is certainly great, and the parents (who arrive about halfway through the film,) add a unique spark here that most movies just don’t have. But what really puts this movie over the top is the comedy. It is absolutely spot on. This is the kind of reactional, observational type of humor that you would only find in a Judd Apatow produced film. The guy doesn’t always hit it out of the park, (This Is 40, Funny People,) but when he does, (and it’s through producing even more than it is through directing, as movies like Superbad and Forgetting Sarah Marshal prove,) you just know it’s because the humor is going all out. There’s a reason why you will never see a Judd Apatow PG-13 movie. He knows that his movies need the R rating and language to hit their tone. And he’s right. But with this movie, the real credit goes to Kumail Nanjiani himself, for brining his true to life story to the screen, writing it, starring in it, and delivering one hell of a movie.