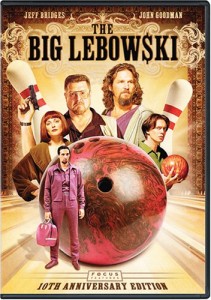 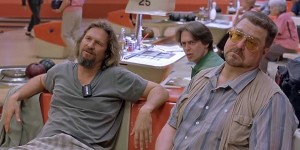 The Big Lebowski is a Coen Brothers comedy that digs deep into the plot of the other genre they are best at… film noir. They specialize in combining the two genres together, as can be seen in movies like Barton Fink, Fargo, and the man who wasn’t there. With comedy, they favor the absurdities that only a black comedy can bring out. And as far as storytelling, they love to build their plot lines around the characters that occupy a seedy underworld and dabble in the guilty pleasures of corruption and illegal activity. On the occasion they find themselves making a movie that is more mystery than comedy, such as no country for old men, and because it’s the only one of their movies that is serious enough to be considered as Oscar worthy, it goes on to win best picture of the year. But do not be fooled. That title is earned by not only that movie, which is certainly a great film, but by all of their movies that led up to it and showed off their capabilities. Fargo is absolutely their best black comedy ever put to film. And The Big Lebowski represents the best of their lighter comedies.

It’s hard to call this movie light when it’s plot features one character having her toe cut off, the henchmen of a pornographer, a band of nihilists, and a major character tragically being killed. But such is the movie about what the narrator calls the laziest man in the world, or at least a man who just might be a running for that title.

This man is Jeff Lebowski, played with carefree brilliance by Jeff bridges and in the role that made him a cult hero to stoners everywhere. Lebowski is a bowler who takes life one-step at a time, and as the movie opens, he is buying milk at a grocery store by opening the container and sniffing it first. He ends up with a coating of milk stuck to his mustache and he doesn’t seem to notice or care as he writes out a check to the cashier for only a couple of cents.

When he arrives at his apartment, Lebowski finds henchmen there waiting for him, who give him a beating, urinate on his rug, and demand to know where their money is. Lebowski has no idea what they are talking about and tells them they are confusing him with someone else. It is only after he sits down at a bowling alley with his buddies and discusses what happened that he is able to figure out who they must have really been looking for. Another man named Lebowski who happens to be a millionaire.

At this point the movie really starts combining slapstick comedy with the mystery story. For every scene of Lebowski going to see the millionaire or following up on clues, there is another scene of him and his buddies at the bowling alley. And those scenes are absolutely hilarious, representing the real comedy of the movie.

In one bowling alley scene, Lebowski and his buddies Walter (John Goodman in what might be his best role to date) and Donnie (Steve Buscemi), discuss the proper use of the word “Chinaman,” while talking about the guy who urinated on the rug. In another, Walter pulls out a gun and aims it at a player on another team who stepped over the line while bowling. In two more scenes we meet John Turturro playing a crazy character named Jesus. First Jesus comes over and threatens Walter saying that pulling gun stuff won’t work on him. And then later Jesus has a problem with Walter taking a day off from bowling because it the Jewish holiday Shelmer Shabbis.

All of this is combined with the story of Lebowski being hired by the wealthy man to find his kidnapped wife. He believes that since those goons confronted Lebowski at his house, this bum of a man is in the unique position to either confirm or deny whether or not her kidnappers are the same people who assaulted him.

And so the dude, as Lebowski he is called throughout the film, goes to make the money drop off, bringing Walter along for support. From here, things go horribly wrong, entirely because of Walter and his refusal to play along with the kidnappers. As the web of what to do and their failure at doing it becomes more tangles up, we meet more and more characters, each having an interest in the money.

It all amounts to a bunch of fun and colorful characters, each with an interest in the money, each with a story of why they are entitled to it. But what makes this movie so rich and unique is that these characters all have their own things going on as well. Take Maude for example. She might be interested in the money, but she also has her painting style, in which she goes into detail about the female anatomy, and her giggling artist buddy, as well as her desire for a child by a man who will have no interest in raising it. The movie is filled with fun characters like this. It is lively and filled with great moments that very often are more or less red herrings, such as when they find a teenager’s homework in their stolen car and go to pay the teenager a visit. This is a fun movie with a mystery driven plot and lots of lively little comedic threads and ideas.