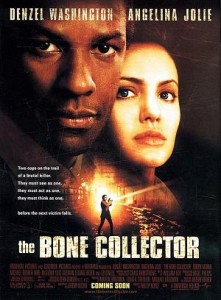 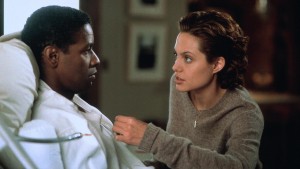 A cheap attempt at trying to combine seven with the silence of the lambs, and ending up more cliched and dull than it ever should have been.

This is a movie that is assembled from the parts of other films. there’s the killer who sets up his murder scenes to give the detectives clues about who his next victim will be or about the reasons why he killed these people (right out of seven).then there’s the partnership between a stationary and confined detective and a field detective who goes out and does the leg work. that’s the silence of the lambs kicking in. instead of being trapped in a prison cell, denzel washington’s consultant character, lincoln rhymes, is trapped in a bed. it’s the one thing this movie thinks it has going for it, but as it turns out, it’s not nearly enough. the actual murder story is tired and uninteresting and the clues don’t really amount to much. there are some worthwhile things about the movie, including denzel washington, who is always fun to watch, but overall this is a pretty lousy movie.

The Bone Collector is absolute crap. it’s a movie that really had nothing creative to offer in terms of plot and thought it could just combine the elements of other films, make small changes here and there, and get away with it. whatever changes there are, appear on the surface and are out in the open from the very start of the film. i’m talking, of course, about how the hero of the movie is confined to a bed the whole time. but don’t worry, this movie does not take place all in his room, like that story normally would lead to. instead, he has another character go out and do his walking around and investigating for him.

denzel washington plays lincoln rhyme, a guy who used to be a homicide detective with all the skills in the world. rhyme used to go out into sewers and tunnels looking for dead bodies as he pursued cases. and at the start of the film, we see the one time he goes out and gets hit by a falling piece of metal pipe, and ends up getting paralyzed from the waste down.

so now he’s stuck in a bed, being watched over by nurse thelma, (queen latifah) and getting visits from other police detectives. these detectives (like ed o’neal, mike mcglone, and michael rooker) or hot on the case of a serial killer. the killer sets up the scene where the body is found in mysterious ways. he puts random objects around the body that are actually clues. this is where the whole seven thing comes in. that movie was all about the crime scene and the motive. every scene was studied in full detail to examine just how crazy the killer was and what he might have been thinking.

The Bone Collector tries to take it a step further by combining it with the silence of the lambs. that’s because instead of having two detectives working the case together, like in seven, we get one detective stuck in a bed and the other one being the field detective who comes back and consults with him. this is just like clarece (jodi foster), in silence, going out to do her detective work and then coming back to the prison, every so often, to consult with hannibal lecter (anthony hopkins), about her discoveries. and just like in silence, where lecter was stationary, confined to a prison cell, and always where clarece needed him to be, linconl rhyme is stuck to a bed.

what The Bone Collector learns, the hard way, is that you can’t just rip apart the pieces of other movies and mix them around and glue them together. you need some fresh ideas of your own. the actual story about the killer is not fresh at all, and considering that this is the main story of the film, it’s a serious problem. having denzel stuck to a bed is a one shot deal. maybe it’s a little surprising at first, but we get over it quickly. especially with angelina jolie, playing donaghy, walking around, doing all the leg work.

the movie goes nowhere fast. we get one murder after another and each time, we see the killer in his cab, pick up a passenger, kidnap the victim, drag him somewhere, and kill him. while we see the murder, we see the killer setting up the scene. and then we follow the cops as they try to figure out the clues faster than the killer can finish what he set out to do. it is repetitive and much less interesting than it should be.

the clues are not creative at all. they also don’t really mean anything. the killer removes bones from his victims. he also stages his scenes based on pictures and stories in a book. but none of this has anything to do with anything else. maybe if the clues led to figuring out who this killer was, we could have had something. maybe if one led to another, like a trail, the way clues are meant to lead, this movie could have worked. at least better than it does.

instead, we get a movie that seems like it is just trying to fill up it’s screen time. they bring in all kinds of conry and cliched characters to make us think that maybe these guys are the killer. michael rooker plays the head detective who is an absolute jerk. we have no reason to suspect him of anything other than that he keeps trying to shut donaghey down. but is he wrong? she steals evidence from a murder scene and leaves with it. there’s also a creepy guy in a book store, who seems to be a little more interesting in donaghey than he should be. but all of this has nothing to do with anything.

the identity of the kiler is also a real bust. the only thing that works about the movie is our interest in who the killer is and our desire to find out. it’s the twist ending that we crave with every movie like this. only here, the killer turns out to be nobody we could have ever predicted. now that’s okay, if there are other things to admire in the film. after all, seven didn’t feature a villain who we could have predicted. but that movie did everything right, from style to storytelling to characters. it didn’t matter who the killer was, and boy did they find a great actor to play him. in The Bone Collector, finding out the killer’s identity becomes the best thing about the film. not so much the moment of finding it out, but the pursuit of finding it out and the desier to know.

The Bone Collector isn’t terrible, because the story does keep you entertained and wanting to see more. if it wasn’t a mystery, this movie would have never worked at all. there are just too many dull and lifeless parts. but it’s the mystery that keeps us watching, wanting to know who the killer is and how they’re gonna get him. i’d like to be able to say, how they’re gonna figure him out, but even that idea is something this movie gets wrong. this was a movie with no creative or original ideas of its own other than the very first ones that started out the film. that turned out to be a recipe for a pretty lousy movie.