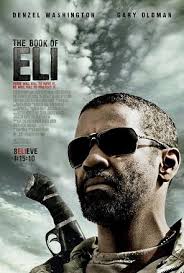 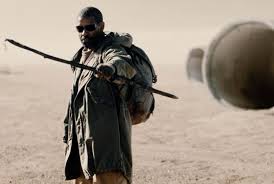 An okay movie with decent action and style, but a plot that starts to feel monotonous and tiresome when it should be getting more intense and exciting.

The Book of Eli is Denzel Washington’s I Am Legend. It’s his end of the world movie where he plays a lonesome traveler. And for the first few minutes of the movie, it feels like I Am Legend too, with Washington alone, searching abandoned houses and going through his daily routines.

The movie has plenty of good qualities. It’s an end of the world story to be sure, which is normally very cliched, but here they are trying for something new. A little realism (no vampires or zombies), but some religious superpower instead. Washington is not an angel, and he is certainly capable of dying, but he’s also on a mission and being protected every step of the way.

Aside from the pretty cool plot, the movie is also very artistically filmed. The Hughes Brothers took a longer vacation before making this one, than any other filmmaker, including Terrence Malick, but maybe that’s because they were readjusting and relaunching their style. The look of this movie is pretty great, with bleached out yellow colors and grainy atmosphere. It’s dirty and it feels dirty and depraved, kind of like The Road Warrior.

But the movie also has flaws. Gary Oldman isn’t up to the same job of playing villain as he used to be. Just watch him in the Professional to see what he was once capable of. By now, he’s a much older, much more tired actor, and it shows.

And the story has problems too, especially toward the final portions of the film with what seems to be a rush off to a sudden ending. After the elderly couple’s house, the action comes to an abrupt hault, and I’m not entirely sure that was the right move.

Still, up until that point, the movie had a lot going for it, and it is certainly a worthwhile film. It’s fun and it’s clever and the Hughes Brothers get to use this movie to show just how skillful and artistic they really are.

But then he begins to meet characters on the road, and the movie suddenly starts feeling a lot less like Cast Away and a lot more like one of Clint Eastwood’s Man With No Name movies. We get some pretty great action scenes, starting with one that takes place in the shadows of a tunnel. The action holds nothing back as limbs are sliced off and blood shoots viciously out into the air.

The rest of the movie isn’t quite as violent. There’s action to be sure, but nothing as brutal as this. Washington comes upon a town run by Gary Oldman and the people there want his Bible. Only Washington has no interest in giving it up.

When he leaves, they pursue him. Mila Kunis tags along with him and Oldman and his crew go after them both. There’s a fantastic action scene in the house of an elderly couple with a giant shootout taking place both inside and out of the house. The movie was directed by the Hughes Brothers and with this scene they really get to show off, swinging their camera all around the house, often with continuous shots that go from inside the house to outside where Oldman’s men are positioned and firing away.

The movie has a final segment that is meant to provide answers, but really feels more rushed and tacked on than anything else. There’s an end twist that is totally unclear and knowing it doesn’t make the movie any better. I’m not one of those who claims the twist is ridiculous and completely unbelievable, but I’m one who is angry that it is made so hard to realize when it could have been handled so much better.