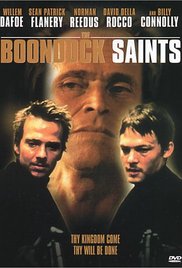 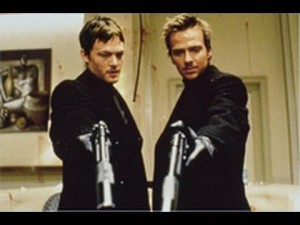 The action is alright and some of the filming ideas are pretty cool, but both the story and humor are weak, and there’s no getting past that.

The style and action are great, but the storyline is ordinary and the humor doesn’t work at all. this movie about two vigilante hitmen has one very cool strategy that it uses again and again, without feeling repetetive or uninteresting. the strategy is to show us the aftermath of a scene before showing us the evens that caused this aftermath. it’s great for making us curious. there is definitely some great filming here, and cool slow motion shots during the action, but the villains aren’t given enough time for us to know who they are and the story is pretty routine.

The Boondock Saints is a movie that developed a hell of a cult following. for a while, after it came out, this movie was on everyone’s lips. the truth is, it’s an artistic film, but far from a great film. the movie is completely inspired by quentin tarantino in the way it tells a crime story about two hitmen and fractures the narratvie whenever it can to tell things out of order. with that in mind, there’s really only one move that this film comes up with, and yet it manages to milk that move for everything it can get, and carry it on until the end of the film.

the movie is to show us the aftermath of a crime scene before we see the scene that led to this. basically, constant flash forwards. i suppose in a strange way, that’s kind of like another experimental and creative film, memento. the reason why the move is so strong is because when we see the aftermath of a scene, it makes us curious. we want to know how things got this way. it’s a strategy that’s employed by countless movies, for the beginning and end of the film. bookending. the movies start by showing glimpse of what things will be like at the end. we get curious, and want to see the journey that will take us from point a (where the movie opens) to point b (this glimpse of an ending.) the list of movies that does this goes on and on, from a perfect world to carlitos way to kill your darlings.

it’s a great strategy that movies use to tell the viewer that even if the movie has a slow start, big things are coming their way if they are patient. The Boondock Saints finds a way to not just use that once, the way all of those other movies do, but to use it again and again. at the start of the film, we are with our heroes, connor and murphy, in a church. they listen to a sermon about how ordinary people have to help out with making the world right, and can’t just sit by and do nothing when bad times occur.

the boys walk out and head to a bar where one of their friends gets into trouble with a big russian mobster. that’s when the fellas attack. we never see how the fight ends, but instead cut to the next day, with the mobsters all dead in the street. at this point, we think we saw the event that led to this… the fight in the bar. the movie used that to throw us for a curve. turns out the killings didn’t happen until the next day, when the mobsters showed up at the boy’s apartment, still beaten from the day before.

the action scene has the mobster handcuff connor to a toilet and then take murphy outside to the back alley to be shot. that’s when connor breaks free of his handcuffs, gets up to the roof with the toilet bowl still in his hands, and drops it off the roof, to land on the mobster. he also jumps himself, landing on another one of the villains. it’s a cool action scene, but i’m not sure whey the russian mobster handcuffed one of them to the toilet and took the other one out back to begin with. why not kill them both at the same time. this same problem comes up again later in the film, when one of their friends is killed, and for some reason they are not.

now something unusual happens. the police are out doing this investigation, led by paul smecker (willem dafoe), and then the boys show up at the precint. they’re turning themselves in. that’s pretty cool and unexpected, and so is the way the police just send them off, saying that it’s self defense. but what doesn’t make any sense is that for the rest of the movie, whenever these kinds of murders occur, the police seem baffled about who did it. how about the guys who just turned themselves in for doing a crazy scene just like this?

the good news is, while there are plenty of holes in the plot, the style and creativity of the movie keep evolving. we see the aftermath of a hotel room murder scene. then we see the hotel room murder, and it’s a very cool action scene. in fact, it’s the best in the movie, as the boys end up hanging upside down from a rope, dangling in the air, spinning around and shooting the enemies. the scene also leads to the realization that their good friend, rocco, was sent there as a setup for him to be killed.

there’s another action scene where the detectives, led by smecker, go in to see the aftermath, before we see the scene that led up to it. this one takes place at a strip club, and the different between this scene and the others is that now rocco is a part of the team, and going hunting with the boys. the movie employs slow motion during the gunfights, and it all looks pretty cool.

then the movie finds a way to change it up. for the next action scene, which takes place at a card game, smecker goes in with his detectives first, but while he’s in there, going over the scene, we see the guys in there shooting it out, right beside him. in fact, in some moments, smecker gets down on the ground, immitating the gunfighters, and we see them firing off rounds right next to him. it’s pretty cool.

for all the style and artisitc creativity this movie has going for it, the film is also lacking in many areas. for one thing, this movie tries to be funny quite a bit and never really pulls that off. the humor is weak. so is the story, which is basically just these two guys going around killing mobsters. we don’t know who the bad guys are, and so they are basically just nameless, faceless villains. that means we don’t really care so much when they die. these mistakes pile up, and so despite the movie’s creative filming ideas, the plot ends up being pretty poor and ordinary.