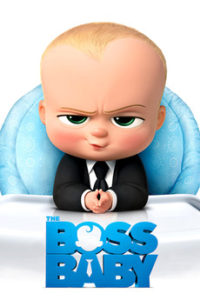 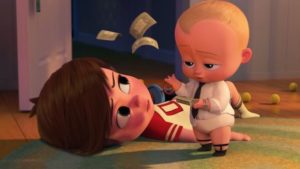 A very funny take on the idea that a baby can actually be a businessman sent to infiltrate and spy on a family in order to learn what the parents are up to at the company where they work.

This is a creative and fun movie that takes a very simple idea and works wonders with it. The idea is that there is a baby management company out there, called Baby Corp, and they have sent a baby down to infiltrate and spy on a family in order to gain information. Babies are losing their love, cuteness, and popularity among people, and all of that is starting to go to puppies instead. And now, there’s a company called Puppy Co, which is making something called The Forever Puppy, and just might lead to end of baby love. The Boss Baby has been sent to the house of two parents who work for Puppy Co, in order to gain information. This movie has him start out as enemies with his brother, but then end up teaming up with him In order to find out that information and get The Boss Baby sent back to Baby Corps. All of it makes for a very fun movie, filled with slapstick humor and witty ideas. The Boss Baby might talk the language of business, for example, but every example he uses involves baby toys, (such as when he shows Tim that he won’t fit in the family much longer and uses a triangle peg in a square hole to do it.) The final act of the film gets a little too carried away and convenient, but up until then, we have a pretty smart and entertaining movie.

The Boss Baby is surprisingly pretty good. It’s amazing how these animated movie can do it, finding one little idea that seems pretty dopey on the surface, and then spinning it into all sorts of creative directions. Coco just did it this year too, telling the story of a boy who goes into the afterlife. It seems that one thing nearly all of these movies have in common is a world somewhere that has its own rules and laws and way of doing things. In The Boss Baby, that world is Baby Corp. This is the place where babies go if they aren’t quite family material, and instead, are sent directly into management.

The movie is about a kid named Tim who is very happy living with his parents and getting along with what he considers the perfect life. We watch a montage of this at the opening, narrated by Tobey Maguire, and see all the ways that he considers his situation to be great. These include getting multiple stories read to him each night, going on “adventures” with his parents (even thought most of them are in his imagination,) and his idea that three is the best number and a triangle is the strongest shape. And then the baby comes along.

It starts with Tim’s father (voiced by Jimmy Kimmel,) asking Tim if he wants a baby brother. Bad question to ask. Tim says “no thanks,” but not long after that, a cab arrives at the house and the baby hops out, in a suit and everything. We see where the baby came from before this, during the opening titles. First, there was a heaven like place in the clouds where all babies were dressed, powdered, given a pacifier, and moved along on a conveyer belt. Then the babies are tickled by a machine. If they laugh, then a sign that says, “family,” lights up. If not, then it’s off to management. And that’s exactly what happens to this baby. He is sent to work in a cubicle, in a sea of other offices and cubicles. And then he arrives at Tim’s house.

Tim is suspicious of this baby from the beginning. He notices his parents stop paying attention to him, and doing everything for him. Instead, they are constantly running around doing things for the baby. And this baby seems to understand that Tim doesn’t like him. He laughs when the father says things that are embarrassing about Tim, (like how long Tim carried a stuffed animal around for, when he was a baby,) and is also very physical. He smacks hands off his bottle, grabs the table cloth and yanks it so that Tim falls on his face, and is clearly a lot smarter than the parents think.

Turns out Tim is right to be suspicious. One day he catches the baby in his crib, on the phone with someone, talking about how the kid (Tim,) is onto him. Tim runs in and tells the baby he’s caught and that Tim knows he can speak. And the baby (voiced perfectly by Alec Baldwin,) admits it. He tells Tim to stay out of his way. Only. that’s the exact opposite of what Tim has planned. His plan is to expose the baby for the fraud that he is, and to get proof that this baby can talk, to show his parents. He goes into stealth mode, dressing like a ninja, and sneaking around the house. Tim tries to record the baby talking, and this leads to some great physical comedy.

It gets especially funny when the baby has a playdate with other babies, and they sit around in the house meeting about their situation. That situation is that this kid, Tim, is trying to expose them. There is the girl who takes notes (even though she can’t read or write,) the three yes men, who dress in PJs and are agreeable about everything, and the fat baby who doesn’t wear a shirt and is like a bouncer. Watching The Boss Baby run this meeting and then try to stop Tim from getting a tape he has recorded into the hands of the parents is great fun. This is some wonderful slapstick material. And it’s still only the start of the movie.

This is a five act film, and Tim trying to get the baby kicked out of his house is the second act. The first one was before the baby arrived, when we saw Tim in his happy home life, and the baby in the clouds, at the place that determines where all babies end up going. For the third act, Tim and the baby put aside their differences and unite on an issue. The Boss Baby tells Tim all about the world where he comes from and about Baby Corp. We actually get to see this, (as does Tim) when the Boss Baby gives him a pacifier to suck on, and sucking on it takes him to that world.

Tim learns that the Boss Baby is here on a mission to find out about this new puppy the parents (who work for a place called Puppy Co,) are working on. They are trying to “launch a new product,” and the way the movie plays with the idea of launching, treating it like a pirate ship launching is very funny. Babies are losing their cuteness appeal and love because of puppies, and now this new puppy (called the Forever Puppy,) threatens to take some love away even more. All of this is shown to us on a pie chart. The Forever Puppy is exactly what it sound like. It will stay a puppy forever and never grow old. If The Boss Baby can find out about this, then he can go back to Baby Corp and Tim can have his family back, all to himself.

So Tim and the Boss Baby join forces to find out about the company and the third act is them convincing the parents that they are getting along. This is all a means to an end, because their ultimate goal is to get Tim out of being grounded (in his room, which he projects as a prison cell,) and to get both of them invited to “take your child to work day.” Then, they can sneak around and get information about this new puppy. And that’s exactly what happens. The fourth act is at Puppy Co, where the Boss Baby has to dress like a puppy and crawl around on all fours in order to fit through a little puppy door flap. This is also where we meet our villain, who has an evil plan not only for Puppy Co, but also for taking down Baby Corp.

The final act of the movie has our characters going to the convention in Las Vegas where the new product will be launched. This is really the only lousy act of the movie. It’s not that it’s terrible or anything, but it doesn’t hold up the same way the other acts do, with the same level of intelligence. For example, everything that Tim imagined as a fantasy surrounding him situation in the past has been great, (in the dungeon, for example, his alarm clock wizard was hanging from chains on the wall, which is perfect since in reality the alarm clock really was on the night stand beside him. But here, in the final act, the fantasy ideas become about a pirate ship, and getting out of real threatening situations by pretending they are something else. It doesn’t work. Neither does an Elvis impersonating flight, where the kids dress as an adult Elvis and somehow manage to fool everyone, (they even sit in First Class, telling the flight attendant that they are the Captain’s children. As if it’s that simple.) But this is the only act of the movie that doesn’t quite work, in what was otherwise a very funny and creative film.