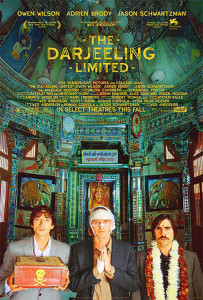 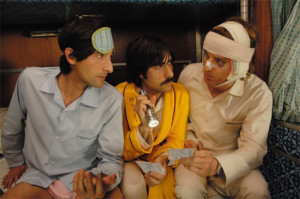 Stylish, but not nearly as funny as most Wes Anderson films, this is probably his weakest film.

This is the Wes Anderson movie that doesn’t work. it’s unfortunate, because the setting is great, and Anderson’s style is strong as always, but the plot and humor here both fall flat. the story is about three brothers traveling India on a spiritual journey. each brother has about one punchline that defines his character and those punchlines are repeated again and again. instead of mainting the elements that do work, such as the train and it’s owner, the story takes the characters in all sorts of unfunny directions. once they part ways with the train, the movie goes downhill fast. there are definitely some funny parts and redeemable qualities, but this movie is not up to the same caliber as Anderson’s other gems.

The Darjeeling Limited is a weird movie. now all Wes Anderson movies are weird, and all of them have the same basic character as the lead, but The Darjeeling Limited is the movie that falls short of the mark more than any other. this is the one that ends up being far more serious than it is funny. now the fact that it has a decent amount of redeemable qualities proves the point that Anderson might never actually make a bad movie. if this is his weakest film to date, than he’s clearly got something going on. still, it’s puzzling to understand why he would make a movie like this and not realize that the jokes were falling flat and the overall story was more sad that humorous.

the movie is about three american brothers traveling through India. their father has recently died, and the brothers decide that this will be a spiritual journey that brings them closer together. the whole thing is orchestrated by Francis (owen Wilson.) he’s the one playing the usual Wes Anderson character, a guy who thinks he is above everything and can do whatever he wants and that other people won’t realize or call him out on how terrible he’s being. Wilson played the same kind of character for Anderson in the director’s first movie, bottle rocket.

since then, Anderson has gone on to feature a character like this in every single one of his films (except, possibly, the fantastic mr. fox, which was an animated picture.) if there are three major defining characters of a Wes Anderson movie, it’s the quick pans for humorous effect with the camera, the vibrant and bright colors which reach a point of intentionally looking fake in the most playful of ways, and the story featuring a main character who thinks he is above the rules of society.

the problem here, in darjeeling, is that francis doesn’t really do enough to be the representative of the archetype in this film. he comes up with the plan. he has a guy on board the train with them lamenating little itineraries of what they will do each day and sliding it under their door, and he orders for all three of them everywhere they go. that’s about it. the lamenating thing is funny, especially because francis does not want to even see the guy he hired to make the schedule and instead wants it to seem like a secret mystery where the card came from that was slid under their door. but it’s a one joke idea and then it’s over.

the same could be said of most of the jokes in this movie. they get repeated over and over again, but they are simple one joke ideas that don’t need any repeating. such is the case with peter, the middle brother, played by adrian brody. this actor is new to the Anderson universe (the director tends to use the same cast members, just like the coen brothers, and brody has since returned in a later Anderson movie, the grand budapest hotel.) brody’s character, peter, really has one joke going for him. it’s that he has taken a bunch of things that belonged to their dead father and now is wearing them on the trip. in the first half of the film, nearly every time francis looks at him, peter is wearing something that belonged to their father. and this makes francis pretty upset.

francis doesn’t like that peter took these things without asking them if they wanted any of the items. peter doesn’t like the way that francis orders for all of them. and then there’s jack. he’s the middle brother and the most distant, (although it’s often a toss-up between he and peter for that one.) jack (as played by Anderson veteran jason schwartzman), is a lover, not a fighter. he definitely has a mischievous side to him, because he is constantly checking his ex-girlfriend’s messages, but instead of getting mad at things the way his brothers are, jack focusses his energy on winning over the wife of the train owner.

the train they are on is The Darjeeling Limited. for a movie that is given this title and a train which seems so prominent in the opening sequence, where characters rush through India and then run to catch it, we don’t see as much of the train as i would have liked. sure, the characters are on it for nearly half the movie, but we only explore the different cars very briefly. they could have had more fun with that.

whatever humor there is comes from the relationship between the train owner and the boys. he can’t stand them. and he’s very quiet and reserved about the way he handles them, but he can’t believe these americans who do things on his train without even thinking. they smoke right next to a no smoking sign, they bring a poisonous snake onto the train and then lose it, and they get into a fight which leads to a chase, where one of them runs through a glass door. on top of all that, the owner has reason to suspect that jack might be doing something with his wife.

the owner of the train is by far the best character in the film. his story, which is really all just reactions to the brothers, is the funniest thing this movie has to offer. that’s probably because the actor is playing it straight, not trying to be funny, and his way of never cracking a smile or dropping his guard is what makes him so entertaining. unfortunately, somewhere near the halfway point in the film, the boys part ways with the train and never return. that ends anything positive this movie had going for it, such as this owner and his wife.

the second half of the movie is far worse than the first half, as a result of this. it is so dull, in fact, that we have to get a flashback scene to the father’s funeral and the boys trying to take the old man’s car from the shop at the same time that the funeral was about to start. that scene might be fun, but the rest of this portion of the film does not work at all. from an attempted rescue of a child to seeking someone out from their past, the story might have some merit on a dramatic level, but the humor is all gone. this movie is okay, and stylish just like every Wes Anderson movie, but as far as story and humor go, it doesn’t quite achieve what it’s going for.