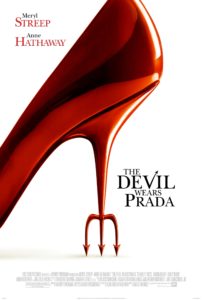 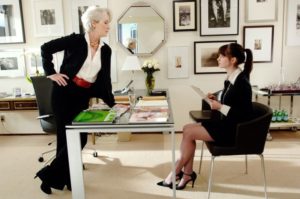 A pretty entertaining movie that actually does not go down the paths one might have expected, but instead finds some interesting ways to tell this story about a challenging job and boss.

This movie is surprisingly better than one might have expected. It looks like a fairly obvious story of a boss from hell who has high demands and treats her assistant like garbage. But that’s only the start of the film. From there things gets much more humorous and compelling, as there are interesting discussions about fashion and clever ways of turning the tables on characters. There are even twists here. The movie definitely gets off to a rocky start, but it picks up from there and gets better as it goes along.

The Devil Wears Prada is the black comedy / drama of a movie that made the careers of both Anne Hathaway and Emily Blunt. It’s the movie about fashion that looked inside the industry to see the players who were behind the scenes. Forget movies about runways and fashion shows. This movie was about the politics of it all. It was about the inter-workings and office maneuvering. And it captured all of that with a humorous edge. Most of the credit for all of this should go to Meryl Streep, of course, who knocks it out of the park as the ultra-bitch Miranda Priestly, the editor of Runway Magazine, (based on Vogue.) Streep knocks it out of the park here, and she brings everybody else along for the ride.

The protagonist of the movie is Andy Sachs, (Hathaway,) as a young, naive, and totally clueless with fashion, go-getter. Andy applies for a job at Runway magazine because she knows it is a sought after job that will look great on her resume. But she knows nothing about fashion and isn’t exactly interested in learning. She knows that Miranda is the kind of boss who will treat her poorly, and she’s okay with that, because she believe she will only be doing this job for one year before she trades up for something even better. Something that she can actually enjoy.

Still, getting the job isn’t exactly easy. She goes in there, for the interview, and meets Emily, (Blunt.) Emily is Miranda’s assistant, and similarly to Miranda, she’s not exactly nice. She can’t believe this girl, who can’t even dress nicely, wants to interview for a job at their fashion magazine. And Emily plans to do the interview herself, as a no-brainer, get rid of this girl immediately, situation. Only Miranda has been disappointed with the last batch of girls that Emily has hired, to the point where she decides to do the interview herself. And the interview doesn’t go well. Andy does not say anything to help herself, and Miranda walks all over her. But then, while leaving, and in the process of walking out the door, Andy turns around and says something. Of course she does. This is the most cliched move ever. This is the thing that gets Miranda to look up and say, “hey,  maybe this girl is different.” Only it’s not like what Andy says here is anything special. She just says that she’s a hard worker. That’s about it.

Even still, it’s enough to get Andy the job. We are later told that a large part of why she got it is because Miranda was so unhappy with all of Emily’s last hires that she decided for this one, to go with someone who was completely the opposite of all of the others. Here is a girl who doesn’t know the first thing about fashion. She has never even heard of Miranda Priestly before. And so Miranda hires her. Does it make any sense? Of course not. You’re never going to hire someone who seems completely wrong for the job just because she is different from the people who seemed right, and didn’t work out. It’s totally ridiculous, but the movie has fun with it anyway, and uses this situation to get Andy in there, as Miranda’s second assistant, (Emily is still her first.)

Now the tormenting begins. Miranda calls Andy “Emily,” showing that she doesn’t even know Andy’s name and doesn’t care to learn it. Every day when she walks in, Miranda throws her jacket and bag right on Andy’s desk, for Andy to hang up on a hanger and rack. This is all pretty funny. And then we get to Andy’s first challenge. Miranda is stuck in Miami during a hurricane. And she needs to get back to New York to see the recital of her two daughters, (the twins,) the next day. So Andy needs to get her on a flight. Only all of the flights are grounded because of the hurricane. It’s an impossible task, and of course Andy can’t do it. Only the movie now spends a number of scenes after this discussing how Andy failed at her job and has to be better from now on. WHAT? It was impossible. The idea that she failed is totally ridiculous. And yet, that’s what she is even saying about herself.

It takes a while for this movie to start getting good. For the first quarter or so, the story is exactly what you would expect. Everybody treats Andy lousy. They make jokes about her fashion left and right. And then there is one great scene where Miranda actually analyzes Andy’s fashion. She tells Andy that even by not choosing or putting much thought into what she is wearing, Andy has made a decision with tons of ramifications. She is trying to show that she doesn’t care, and thinks she’s just wearing a blue sweater, but really it’s cerulean, but what she doesn’t know is that a famous fashion designers decided to do whole lines of clothing in cerulean a number of year ago, and from there it hit the shelves and was big for a while, until it got old and sent to retail and then eventually went into the bargain bin, which is where Miranda claims Andy must have found it. So what she’s wearing, while it might seem to be based on no decision at all, was actually decided for her by the people in this very room, Miranda tells her. That level of analysis is pretty cool. It’s one hell of a monologue and probably the best scene in the movie.

Not long after this, Andy decides to start caring about how she looks and changes her fashion all together. She gets some help from Nigel, (Stanley Tucci,) who is Miranda’s number two. Andy comes to Nigel early on to complain about Miranda and Nigel isn’t interested. He tells her he is not going to pity her when she is doing a job that thousands of girls would kill for. Andy doesn’t seem to care, and thinks all of this is beneath her, and it doesn’t exactly rub people the right way. So she changes and starts dressing better. The montage that shows us this, played to the Madonna song “Vogue,” is great. It involvers Andy constantly walking behind things, like columns, and changing outfits to the point where she is wearing one thing before she walks behind it, and then is wearing something else afterwards. Miranda is impressed with Andy’s new fashion. She starts calling her by her real name, instead of Emily, and gives her the job of dropping a book off at her apartment.

Only Andy screws that one up. Instead of leaving the book in the first floor hallway, like she is told to do, Andy listens to the twins, who trick her into coming upstairs. That’s where she comes face to face with Miranda, right as Miranda is in the middle of an argument with her husband. Andy leaves the book on the floor and runs out of there, but it’s too late. Instead of firing her the next day, Miranda gives Andy an impossible task. It involves a Harry Potter book that has not yet been published. Miranda wantsa a copy for her daughters. This reminds me of the prisoner demand in Logan Lucky for the unpublished George R Marin next installment of the Game of Thrones books. Only here, Andy is actually able to accomplish the goal, by reaching out to a guy in the industry who has connections and is very interested in her. This guy knows the illustrator of the book, calls in a favor, and gets a copy. It’s pretty ridiculous, but the movie is meant to be over the top, and so it works.

From here, Andy is Miranda’s go to girl. When Emily gets sick at a function and then forgets somebody’s name, (and Andy remembers it,) it pretty much seals the deal. Miranda wants Andy to replace Emily. Not that Emily is being fired or anything, but she is certainly being demoted to the point where Andy, and not Emily, is the one being asked to go to Paris with Miranda. This is for the coveted event of the year, the one that Emily has been talking about ever since she first met Andy. And of course Andy says she could never do that to Emily, and Miranda tells her if she doesn’t accept the offer, she is fired. There are a lot of threats like that in this movie, including the one over getting the Harry Potter book. So Andy goes, and it costs her the relationship with her boyfriend, (Adrian Grenier from HBO’s Entourage show,) who she has been growing apart from.

And it’s in Paris that we get the climax, which involves some under the table business and back stabbing of Nigel, who thought he was getting a major promotion. When Miranda’s job is also on the line, she doesn’t hold back and throws whoever she needs to under the bus in order to ensure that she comes out on top. It’s a great climax, and it’s punctuated by a scene between Andy and Miranda in the car, where Andy realizes things about her boss for the very first time. This is a movie that gets better and better. The first fourth or so of the movie is the weakest part. But as Andy grows more into the role and learns the business the situations that surround her become more and more interesting. And sure, her replacing Emily in certain ways carries the same overall ideas of movies like All About Eve, and yes, even Showgirls, but that’ only because it’s a very famous and cliched story. Young naive innocent character comes in and learns from a mentor, but when given the opportunity to throw that mentor down the stairs and walk right over her in order to advance ones on career, the character does not hesitate. This movie might use the tired storyline, but it’s still a pretty entertaining film. We’ve certainly never seen this angle of the industry before, and Meryl Streep’s performance along is enough to really keep us entertained. The fact that Andy goes through some major changes during the course of the movie, and doesn’t stay the innocent naive character forever, goes a long way. A pretty interesting and enjoyable movie.