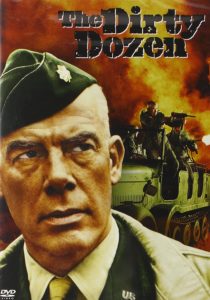 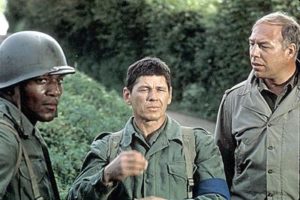 A pretty good movie for its time, this one definitely feels dated and long, but it still works.

The Dirty Dozen is one of those men on a mission movies that characterized the late sixties and early seventies of cinema. There were so many of these movies at the time, The Wild Bunch, The Guns of Navarone, The Magnificent Seven, The Great Escape. Many of them even starred the same cast members. Charles Bronson and James Coburn, for example, appeared in a bunch of these movies. The thing that separates the Dirty Dozen from most of the other ones though, is that this movie was about the military. And it stayed with the military the entire time. In fact, it stayed with this one unit and one team of characters for the whole movie, and for the most part, had a very straight forward plot. And yet it still works.

The movie isn’t great by any means. It is way two long, (coming in at two and a half hours,) and there’s way too much time spent with the men before they get to the actual mission. But the story is pretty solid, and for that reason a lone, this movie is definitely ripe for a remake. It’s only a matter of time before they get to it, (after all, they already remade the Magnificent Seven with Denzel Washington.) The story that is so simple and yet so entertaining, is that a military officer, Major Reisman, (Lee Marvin,) is given the order to train a group of convicted felons to go on a deadly and potentially suicidal mission. In fact, come to think of it, this is a lot like the plot of Suicide Squat, the lousy DC movie that was supposed to be the DCEU’s (DC Extended Universe,) answer to the Guardians of the Galaxy. The idea is that these are the worse of the worst when it comes to convicted felons, many of them are on death row, and they’ve got nothing to live for. So of course, they are going to take on this impossible mission, with the hopes that if by some miracle they do come out of it alive, maybe their sentences will be reduced.

In the opening scene, Reisman goes into military headquarters, sits down with a bunch of high ranking generals, (including General Worden, played by Ernest Borgnine,) and is told about the mission. And Reisman gives these generals hell about taking it on. Everything they throw at him, he throws right back at them, and doesn’t understand why it’s being offered to the men, and why he’s the one that they want to do it. Eventually he agrees, although quite reluctantly. But he still tells them about one general he severely dislikes, a man named Colonel Breed, who his team will have to ride past at some point, and be guests at his camp. This is of course foreshadowing for what will happen later on.

The movie now takes us to meet the men. Major Reisman drives into the prison area, where they are all out in the yard. The men line up, although some of them have to be forced to do so, and Reisman walks down the line, while an officer read of the men’s names, crimes, and sentences. This is a solid way for us to get to know them. And then Reisman gets his first real opposition. Of course some of these men are going to challenge him, being as how they are criminals with no regard for anything, especially not respect of authority. When one of these men steps out of line to fight Reisman, the Major easily accepts the fight and puts the man down. He makes an example out of this guy for the other men, and from that point on, they are all ears.

After that first meeting of all the men together, out in the open, Reisman goes to see each man one of one. He visits them in their jail cells, and talks to them about their sentence, and their feelings about the mission. This is another smart move on the part of the movie. It knows that with so many different characters all being introduced to us at once, the best thing to do is differentiate each of them from the others a little bit. You want the audience to think of each man as an individual with his own story. I’m not sure that the movie completely accomplishes that, but it certainly tries.

From there, we are with the men during their training exercises. First, they have to build their own facility, working together to construct the lookout tower. Then there are the fight among them during training. Maggot, for example is a religious fanatic and a racist, which doesn’t sit very well with Robert Jefferson, (Jim Brown,) who is black. And there are a number of small scenes that help push the men together and into the right direction. Reisman isn’t off the hook from rebellion these guys just yet, simply because he took down Franco, (the most rebellious of the bunch, whereas Maggot is the most insane.) And one point, Reisman challenges another man who is suffering from post traumatic stress disorder, and refuses to stab anyone with a knife after what he has been through. Reisman gets him to overcome that fear, goading him on until he stabs at Reisman.

At one point the men all go on strikes together, protesting against their lack of hot food. They notice that all of the guard get hot food each day, but their food is always cold. And so they refuse to shave. This is a problem because it makes them dirty and smelly. It’s what gives them the nickname The Dirty Dozen. And Reisman decides to use it as a test to see how the men feel about each other. He tells them, “any man who refuses to shave, step forward.” And one by one, every one of these men does. Men who really want to shave, and have been shaving all of their lives, now step forward. And they do it out of a sense of camaraderie. Major Reisman leaves the group pretending he’s angry about the rebellion, but really being pretty pleased with how the men support each other. And he goes on to tell the guards about that.

As the movie goes on, the story becomes less about their training, and more about taking on enemies. But the enemies aren’t just the Germans. They are also the men under the command of Colonel Breed. In fact, if the movie was divided into thirds, then the first third would be about the training, the second third would be about taking on Colonel Breed, and the third part would be about taking on the Germans. For Colonel Breed, whose camp the men are supposed to get their parachute training at, Major Reisman decides to have a little fun with him at first. He has one of his men impersonate a general and walk the ranks of Breed’s men, pretending to inspect them, and even asking questions and making comments. Eventually this man, Pinkley, (played by Donald Sutherland,) as well as the others, break out laughing, making Breed pretty unhappy with them.

Things get worse and worse with Breed. He has two of his men beat up one of Reisman’s guys to try and get answers about their secret mission. And Breed goes to the generals to report the disrespect by Reisman’s team. The result is a completion, where the two companies, (Reisman’s and Breed’s,) will fave off in a challenge of who can capture the other person’s camp. Resiman’s team resorts to all kinds of tricks, including faking injury and impersonating paramedics. And they are able to pull the wool over Reisman’s eyes and prove that they really are the better squad.

And that brings us to the mission itself. The goal is to blow up a chateau in France, during a party for German officers. There’s a lot here that was used for inspiration for Quentin Tarantino’s movie, Inglorious Basterds, but this is certainly one of those things. In that movie, all of the officers were meeting in a theater for a screening of a propoganda movie. here, they are meeting for a party. The chateau is a giant mansion. The men start by impersonating German generals, (two of them,) to get in and start setting things up. And slowly the rest of the men infiltrate. All seems to be going well until one of their men goes off and falls apart, and gives their location and mission away. And that’s when all the German generals rush to a bunker, and plan B goes into effect. This is a pretty good movie. it is long, and feels dated, but it’s still enjoyable. And the best parts are certainly the beginning, (getting the mission,) and the end (everything at the Chateau.) A lot of the movie feels like it’s not really about the mission and is just about training, exercises, or games. That’s where this thing is a little too long, and would have benefitted from being cut down.