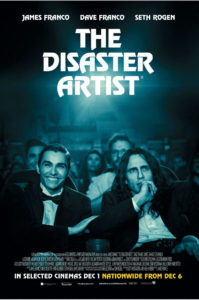 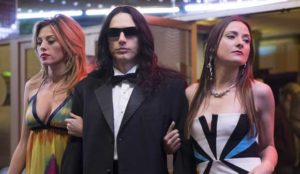 Another incredibly funny team from the Seth Rogen – James Franco tandem, these guys working together can do no wrong.

A very funny movie, this one chronicles the making of a film called The Room which is known among cult following fans as the worst movie of all time. The filmmaker, Tommy Wiseau, is a total wack job, and here, he is the star of the film. James Franco plays the character to perfection, and we catch him at the most meaningful time of his life, when he made this movie that would stay with him forever. The first half of the movie introduces us to Tommy and his friendship with Greg. Then the second half is about the movie they made together. That second half is where the movie really gets good. Credit that to guys like Seth Rogen and Paul Sheer, who plays the straight men to Wiseau’s out there persona.

The Disaster Artist is the next installment from the Seth Rogen – James Franco train, a comedy pairing of best buds that started with Judd Apatow produced movies, (such as Pineapple Express,) and has gone on to become so much more. From This Is The End to The Interview to Sausage Party, these guys are comedy gold. Now that’s not to say that every movie they make together is hilarious. The truth is some of Rogen’s movies that did not feature Franco (Knocked Up, Superbad,) are definitely some of his better films. But their movies are always funny and reliably entertaining. And they also seem to always push the envelope by giving us something kind of new. The Disaster Artist is no exception.

Sure, these guys have taken on a meta movie about playing themselves while hanging out with all of their friends during the apocalypse, (This is the End,) and they’ve taken on an R rated animated film set entirely at a grocery store, (Sausage Party,) but with The Disaster Artist, we might be watching their most ambitious film yet. The reason for this is because The Disaster Artist is a real story about a real person who really is as crazy and wild as they are portraying him to be. There’s no hamming it up here for the sake of comedy. If anything, maybe they toned it down in this film, in favor of getting a little more serious and dramatic at times. And that’s another reason why this movie is something different for them. It is not just a straight uo comedy, but instead a real story that often borders on drama, combined with the usual, out there comedy.

The movie is about Tommy Wiseau, a filmmaker who is so bizarre and off on his own planet that he makes someone like Werner Hertzog look tame. James Franco plays Wiseau in the story of how this man made what is arguably known as the worst movie of all time. The movie is The Room, and it is so bad, in fact, that people have midnight screenings all over the country just to watch and laugh at it. It’s something like The Rocky Horror Picture Show in that way, where people don’t take it seriously, but watch it like a B movie where they can make fun of how bad and ridiculous it is. And we get a sense of that here, watching many scenes from the movie as they are being filmed, such as one where Tommy comes out shouting, “I did not hit her, I did not, she’s lying. Oh, hi Mark.” This sort of bizarre tone shift is the kind of thing that drives the humor in the Disaster Artist.

Another example of how Tommy just doesn’t seem to understand the way humans react to dramatic situations comes when a character tells him a story about a girl who was abused. It’s part of the movie, and a scripted scene, and the way Tommy has it, whenever the character tells him the story, he starts laughing. Not like an uncomfortable laugh, but like he thinks that is the natural reaction someone would have to the story. What makes it especially funny is that everyone on the set tries to reason with Tommy that he would not really be laughing at this, and to try one take without laughing, and he just can’t help it. Either that or he is so stubborn and set in his ways, and his vision, that he refuses to change anything.

Long before we get to this place in the film, however, we meet Tommy when he is in an acting class, performing on stage. The movie starts with Greg (Dave Franco,) the younger actor who gets taken under Tommy’s wing, up there on the stage, performing a scene. He doesn’t do a very good job, and has a hard time really convincing anyone of the character he is playing. The acting teacher lets him know this and then asks if someone can come on stage and do something real and true. Tommy is in the audience. He comes on stage and has a freak out, throwing things around and having a total melt down. It’s all a performance, of course, and it is quite an introduction to his character. Here’s a guy who clearly doesn’t mind being weird.

After the class, in the parking lot outside, Greg approaches Tommy. He tells Tommy how amazing he thought that was, and how he can’t believe the way Tommy got into that character and just tuned out the audience and the world. Tommy likes being complimented and offers to do a project with Greg, working together. They start hanging out with each other, and pretty soon Tommy is asking Greg if he wants to move to Los Angeles with him. It sound like a romantic situation, only it’s not, (and the movie even has fun with that idea in one quick scene where Tommy pretends to come onto Greg.) But Greg mentions moving to LA and Tommy says he has a place there and Greg can just move in with him. And so they both move down there.

That’s when Tommy starts to find himself and realize that he needs to make this film. First, he goes to auditions and is told either his accent is too thick (when he denies that he even has an accent at all,) or that he would be best playing Dracula or Frankenstein, and not a romantic lead. Then he and Greg are at a restaurant and they start rehearsing a scene together. Tommy starts getting loud, really getting into the character and the performance, and the next thing you know, everyone in the restaurant is watching them. This isn’t the kind of thing where everyone is thrilled that they are getting a show, and applauds afterwards. It’s more like people are annoyed that these two guys think they can just do whatever they want and force people to stop having their conversations and to now have to listen to them. THat’s the first time that Tommy realizes he has to do something bigger than this. The second time is when he approaches a producer in a restaurant, (played by real life mega producer Judd Apatow,) and tries to win the producer over with a loud performance. The man gets so angry that he tells Tommy he will never make it and that he should just give up.

And with that, Tommy decides to make his own film. It’s about a fourth of the way into the film, and suddenly things go from moderately funny to pretty great. Tommy as the film director on his ridiculous set is what makes this movie. From the very first day where he shows everyone his private bathroom that he had brought in and is told that there’s a bathroom just upstairs that he can use, to when he has them build the set of an alley in the studio instead of using the actual alley that is just outside, everything about this production is strange. Tommy’s reasoning for not using the outside real alley is that “this is a real Hollywood movie.” Like everything here, it makes no sense, when you think that a Hollywood movies goal is to look real, and that using an actual street will always look more real than using a set, but to Tommy, real Hollywood movies use sets and so he wants to be just like them.

Things get much stranger. Tommy hires a camera man to make a documentary about the behind the scenes of the movie and how it was made, but really he spends his time watching the footage to see what conversations the camera man picked up on the set. He wants to know what people are saying about him when they think he’s not around. This is a form of spying and paranoia that would make Richard Nixon look like an amateur. And finding out the truth about how the people on the set see him only drives Tommy to get even more crazy. He does a nude scene where he spends the day in character, directing in the nude, walking around the set with a sock over his junk. There’s a great moment where he and Greg talk about Hitchcock and how Hitchcock really did torture is actress with birds on the set of that movie, having them attack her. Greg’s response is, “but I bet you Hitchcock never walked around the set directing people with his d*** out.”

Aside from the weird antics that Tommy pulls on the set, which include an extremely hot day where he not only refuses to provide air condition, but also refuses to give the actors water, there’s also the Tommy who wants to be low key. He won’t tell anyone the truth about himself, including how old he is, or where he is actually from. He insists he’s from New Orleans, but there’s no way his accent is from there. And the source of all the money he has is kept a mystery that nobody knows about either. At one point, Greg even calls him out on all of this, trying to get some answers out of Tommy while on camera. And all of it leads to the making of this very weird movie. The Disaster Artist culminates with us seeing the way the movie is viewed and appreciated today, and how different the reception is from what Tommy was going for. Still he embraces its success, claiming that he was going for a comedy all along, and it’s just one more strange thing about this totally bizarre man, (he can’t admit that he got lucky and that he was going for something else, and embrace the reality of how things worked out, but instead insists that this was his plan the whole time.) The story of this man and his friendship with Greg and how it led him to make this movie is a very funny and entertaining experience.