The Edge of Seventeen *** 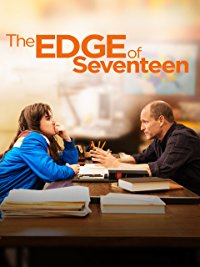 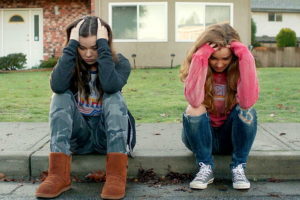 There’s some definite humor here, and the plot is interesting and fun, but unfortunately it’s also kind of predictable.

This is a fun little movie with a somewhat simple plot. A high school girl has only one real friend and that best friend of hers starts dating her brother. Suddenly her whole life seems to fall apart. It’s like zooming into that one small subplot from the movie Election, with Chris Klein and the girl his sister is friends with, and making a whole movie out of that. Only here, it actually does work. That’s mostly because the writing is good and the humor keeps us laughing. Woody Harrelson is particularly great, and really the best thing about the movie, as the teacher who calls it like it is. The story is predictable, and there’s one subplot that actually does more harm than good, (having there be a great guy who has a crush on Nadim, when she is supposed to be down and out and miserable,) but otherwise, this is a pretty enjoyable movie.

The Edge of Seventeen is a movie that surprisingly works. The reason why this is surprising is because it’s a movie about a high school situation that follows an incredibly simple story. An unpopular girl has one best friend, and that best friend starts dating her more popular brother. That’s pretty much the extent of the story. The great movie Election, from 1999, used this idea as only a small part of its storyline. In that film, the triangle between two girls who were friends, and the brother who became the boyfriend of the best friend was such a small part of the film that it didn’t even feature any of the main characters, (not Matthew Broderick or Reese Witherspoon’s character.) And yet here, it is the entire film. Amazing that it actually works.

But it does, and the reason is because this movie really takes a closer look at just that single dynamic. It basically zooms in on that one element from Election and fleshes out all of the circumstances that surround it. In order to do that, it jumps back in time, after a great opening scene, to show us this girl, Nadine’s life during childhood and how it all kind of fell apart. She has a lot of issues, and Nadim’s voice over narration helps take us through the way she ended up at this place, dealing with them all.

The opening scene, set in present day, has Nadine, (played by Hailee Steinfeld,) confront her teacher, Mr. Bruner, (played by Woody Harrelson,) with some very humorous results. She tells him that she’s going to kill herself and has written a suicide note. His response is that he was just in the middle of doing the exact same thing. He wrote a note too, and shares it with her. Then he reads from a blank piece of paper about how this one student keeps bothering him during his only few minutes of happiness during the course of the day, every day. Harrelson delievers the material perfectly. He is actually the best thing about this movie, and the opening scenes gets the whole situation and dark humor tone kicked off in just the right way.

But then we move back in time and see Nadine growing up with a brother who was great at everything, while she was the outcast, loser. She and her brother, Darian, (Blake Jenner) are twins, and he is clearly the cooler twin. At one point there’s even a reference to the movie Twins, and how Nadine and Darian are so different that they are like Danny DeVito and Arnold Schwarzenegger. Nadine and Darian don’t exactly get along as kids, and that’s in large part because of Nadine’s jealousy of how confident and popular her brother is. On top of that, her mother clearly loves Darian more, (or at least has a much better relationship with him than she does with Nadine.)

But Nadine has her father, and a very close relationship with him. When she’s a little girl and refuses to get out the car to go to school, her mother gets out and tries to force Nadine out of the car. The mother climbs into the backseat, trying to pull the girl out, and it becomes a mess. But for the dad, all it takes is him getting out of the car and talking to Nadine for a moment, to get her to go into the school. We see a few more scenes of how close Nadine and her father are, and (knowing that Nadine’s life will arrive at a place where she is miserable about the world,) we can kind of predict what will happen to the dad. Let’s just say, it’s not good.

And not long after that, we jump ahead to Nadine as a teenager, living at home with her mother and brother. When their mom goes away for a weekend, Nadim decides to have her best friend, Krista, over to drink and party. It’s just the two of them hanging out all night, but they still drink heavily and Nadim even gets a little sick. Darian, meanwhile, has some friends over too, and hangs out with them in the backyard pool that night. When one of them gets sick and vomits on the rug, Krista and Darian clean it together while Nadim is passed out. You can predict at this point that Darian and Krista will get together.

And they do. Nadim walks in on them, and suddenly the big moment of the story that changes everything is upon us. Her best friend and her brother. It changes everything for a whole bunch of reasons. Now Krista is elevated to a level of being popular and having all new friends while Nadim is left in the dust. That idea, unfortunately, doesn’t get enough screen time to really come to fruition, but it does appear in one party scene, where Nadim tags along with her friend and brother, and finds herself out of place. At the party, Krista is called to play beer pong with the popular kids and leaves Nadim behind. But that’s the only scene where it comes up, and maybe that’s because Krista sees what ditching her friend does to Nadim and doesn’t make that mistake again.

But Nadim has her own things going on, and that’s where this movie really falls short. Her relationship with a boy named Erwin, who is nice and wealthy and smart, is a little too perfect for a movie about a character who is supposed to be down and out. We’re supposed to believe that Nadim has it so rough and things are terrible for her, but meanwhile this guy who is wonderful has a crush on her and asks her on dates and she goes with him. Sure, things don’t go completely smooth, (he tries to kiss her on a Ferris wheel and she backs away,) but so what? It’s hard to take pity on this girl and feel like her life is so terrible when she’s got a great guy who is crushing on her. And it’s very easy to predict the ending, and what her fate will be with this guy to make everything all okay at the end.

But we do get a little interruption from Nadim’s relationship with that boy, in the form of a subplot about a different boy who she likes. It all happens in a single day where everything falls apart (Goodfellas – helicopter chasing Ray Liotta around, kind of way.) Nadim has a big falling out with her mom, where her mom takes her to work with her, after Nadim refuses to get out of the car at school. Then from her mom’s office, Nadim grabs the car keys, runs out, and steals the car. And in all of her craziness and anger, Nadim sends a text to that boy which is very sexual in nature, and leads to the boy expecting something that Nadim isn’t quite ready for, (despite her text, which did say she was.) It’s one of those situations where when Nadim sends the text, she wishes she hadn’t sent it, and thinks her life will be over, and that everyone will hear about this and make fun of her. But in actuality the guy is into it, and things just get worse from there.

The movie is smart and funny in the way that the situations present themselves. They all seem reasonable and relatable, so much so that things become incredibly predictable. You know Nadim’s father is going to die. You know Krista and Darian will get together. And you know who Nadim will end up with and what the end of the movie will be. This would have been a very different film if the character Erwin didn’t exist.  Having a great guy who is really into Nadim gives her a sort of safety net. Like she never does actually hit rock bottom, because she’s always still got this guy as an option in her back pocket. Other than that, however, the movie works. It has a nice climax involving Nadim’s brother and teacher and despite being predictable, it’s still a pretty entertaining film.