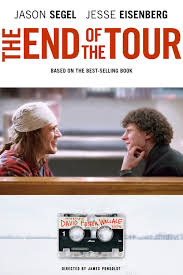 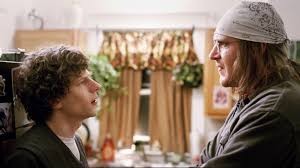 An interesting and entertaining movie, this one takes about half the movie before any real conflict arises, but even in that first half, the characters are compelling enough to hold our attention and make us want more.

A different kind of movie, this one is completely devoted to the time spent together between two characters, one an author, the other, the magazine writer who is interviewing him. This is a sort of buddy road trip movie, and the discussions these characters have with each other are all pretty entertaining. The problem is that the first half of the film is completely devoid of any conflict, and that even in the second half, the conflict is minimal. The movie is interesting, but also leaves us wanting something a little more.

The End of the Tour is an interesting movie. Like, I imagine, the book Infinite Jest, by David Foster Wallace, this movie is very much existential and about just being and existing, rather than fitting into a usual mold with the kind of conflict that we’ve seen before. It’s about conversations about life, as opposed to conversations about the plot. The movie is about this author, Wallace, and the time when he was interviewed by a writer for Rolling Stone Magazine. Boy does that magazine get good stories, so much so that it gets movies made out of the interviews that were done for its publications, (Almost Famous is another example of a writer covering a story for this magazine.) The End of the Tour is about the writer as much as it is about the author, and it is not necessarily a series of interviews, but more of a sort of road trip film about a number of days that these two characters spent and traveled around together.

The characters are David Lipsky (Jesse Eisenberg,) and Wallace, played by Jason Segal. These two are both great actors. They both got to where they are by starring in comedies. With Eisenberg, it was unique movies like the Squid and the Whale, Zombieland, and Adventureland, that brought him to the attention of director David Fincher and got him cast in The Social Network. From there, and the mega success of that film, there was no turing back. For Segal, it was the television route that got him into the mainstream. First, Freaks and Geeks when he was younger, then How I Met Your Mother. All the while, he was under the guidance of producer Judd Apatow, who pushed him along, and eventually got Segal to write a script for himself to star in. That movie was Forgetting Sarah Marshal, and like the Social Network for Eisenberg, it was the point of no turning back. It was the movie that really launched him into the mainstream. And now we have these two actors together, both with real talent and presence, both at the top of their craft, but in a more comedic way, than oscar artsy way, and here they are in this sort of artsy film.

They pull it off. The two of these actors are more or less the only characters in the movie, (sure, others pop up here and there, for one or two scenes, but this is mainly a two character film,) and we enjoy spending so much time with them. Credit for that goes not only to the actors, but also to the writers of this film. It’s interesting and it stays that way without really giving us any sense of a problem, for at least a solid half of the film. It all starts with a call from Lipsky’s editor. The call is in present day after news has come out that Wallace has been found dead. Lipsky’s editor calls him and asks Lipsky if it’s true. As it happens, this is the first Lipsky is hearing of the news. He goes and gets his tapes out of the recorded sessions he did with Wallace, and starts listening to them. That’s when we move into a series of flashbacks that will dominate the film and present us with the story of Lipsky’s experience with Wallace.

Before we meet Wallace and see the interviews get started, first we need to work our way to making that whole thing happen. It starts at a bar, with Lipsky overhearing conversations about this Wallace book, Infinite Jest. Lipsky is interested, but doubtful. Wallace is the talk of the town, and Lipsky thinks that people are all jumping on the bandwagon and overpraising this author. Of course, Lipsky hasn’t read the book yet for himself, but he sure does read critic reviews, and he quotes some of them to his girlfriend. One such review says reading Wallace is like watching Paul Bunyan, the American tall tale legend, if Bunyan had joined the NFL and started playing football. Lipsky’s girlfriend suggests that he actually check the book out for himself, saying, “what if it really is that good.” Lipsky does so, and the next thing you know, he’s going to his editor, asking to go out west and get the interview.

Out west in this case is Bloomington Illinois. Before Lipsky can get out there, he has to convince his editor (played by Ron Livingston.) Lipsky sells the story to editor claiming that Rolling Stone never interviews writers. His editor lets him go, shouting out that there better be a story here. And so the real movie, the journey of the film, begins. Lipsky goes off to Bloomington and has a hell of a time finding Wallace’s place. At one point he even pulls over at a rest stop, gets on a payphone, and calls Wallace up, saying that he is lost. Wallace isn’t especially nice during this phonecall and basically tells Lipsky to lose the number.

Once arriving at the house, the real interactions between these two characters begin. Wallace is the star of the show. Lipsky might be the normal, down to earth character, who we are meant to relate to, and follow on the journey, but Wallace is certainly the more interesting of the two. He has theories and little idiosincrysies about everything, starting with him telling Lipsky, “I feel like I should offer you tea,” when the man first enters his house and meets his dogs. That’s Wallace for you in a nut shell. He’s like an alien from another planet, trying to understand the cultural norms of the way society works. He also has plenty of ideas about what he likes and about the future.

Some of these theories include how having a TV in the center of a room is like having a fireplace in olden times, something that everyone in the room can gather around and sit beside. Something that draws everyone’s attention as the focal point of the room that everyone is facing. He also talks about his strange love of Alanis Morisette, and her music, especially the song You Outta Know. That’s probably Morisette’s most famous song, but it’s also one of her most poetic. It’s also certainly her most raw and angry song. Wallace likes it for all of these reasons. The subjects of the conversations between he and Lipsky continue to change throughout the film, and are often extremely random. At one point, Wallace talks about the idea of one day having virtual reality porn, and how once that happens, people will have no need to ever leave their houses. When he goes into a store, he asks the clerk if they have  some artificial spit. This is definitely a strange dude.

While the movie is interesting, we definitely start to notice at some point that there is no conflict at all. Now, that does change in the second half, but in the first half of the film, it is simply the story of these two men going from place to place sharing stories with each other. We start to crave more. Luckily we get it. Lipsky’s editor calls him and demands that Lipsky start asking the hard hitting questions. Mainly he wants Lipsky to ask about the rumored heroin addiction that Wallace went through. Lipsky says that he will get to that when it feels right. Then the two of them travel to a town for a book signing where Wallace is joined by two women who are both friends and fans. The two women now start hanging out with Lipsky and Wallace. This leads to our first real conflict when Wallace spots Lipsky flirting with one of the women, and then confronts Lipsky about it.

And then there’s the heroin discussion. It’s the topic we’ve been waiting for ever since it was put into our consciousness with that phonecall from the editor. The result of it is pretty interesting and unexpected. Let’s just say Wallace is very aware of the usual formula that stories need to fit and how reality isn’t quite as cliched. The movie follows the same kind of structure as that theory provides. Most films have a conflict that appears within the first twenty minutes. Sure, the first few minutes of the movie are the getting to know you portion, where we meet the characters in their regular lives, but not long after that do we get the first problem. This movie bypasses all that.

Now, the movie does take one of the usual formulaic situations. It has the main character go on a mission. That what separates this film from My Dinner With Andre or any experimental indie movie that is simply about two characters having a conversation. This is a journey film and it helps that we get to spend some time with the main character at the start of the movie, before he goes on the journey, and in fact, while he actually comes up with the idea for the journey. The movie is entertaining and interesting, but due to the lack of conflict, there are definitely times when we crave something a little more. The second half of the film nicely makes up for the problems of the first half and gives us the tension we need, without making it feel forced, but still, there just needed to be a little something more in the first half of the movie. Even if it was foreshadowing and a hint of what was to come, some kind of clue or indication would have gone a long way. Other then these problems of the first half, which are fixed later on in the film, the movie definitely works.