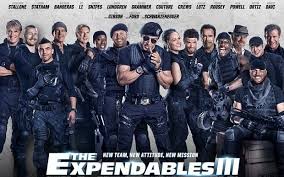 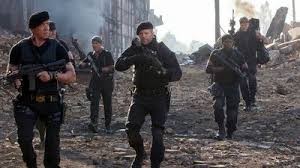 The Expendables is not a very good series. It’s a throwback series to the movies of producer Joel Silver and directors like Richard Donner. It’s a series about a collection of former action stars who used to be on the A list and now are just older guys who still have muscles. These have always been Sylvester Stallone’s movies. He wrote them all, recruited the actors to join, and even directed the first film. Aside from him, each movie has the same core group of actors (Jason Statham, Dolph Lundreon, Jet Li, Randy Couture, Terry Crewes, Arnold Schwartzenegger,) and then some other actors making their first appearance in the series. With the last movie, these actors included Chuck Norris and Jean Claude Van Damme. This time it’s Wesley Snipes, Antonio Banderas, Harrison Ford, and Mel Gibson. Clearly the recruits are getting better.

The problem is that the movies aren’t. The first film was moderately decent with it’s plot about a general of a foreign country who was being used and betrayed by political figures and money men that were pulling all the strings. I don’t remember too much about it, other than that it actually tried to have a plot. The two films that followed it did not. I suppose you could say they realized what they were and that story was not their strong suit. Still, just the effort definitely helps. The second and third movie were more about the villains than the plot. Both films just established a really evil villain who killed or shot one of the Expendables early on, causing the other members to spend the rest of the movie seeking revenge.

In the second movie, it was Jean Claude Van Damme as the villain killing Liam Hemsworth, the young blood of the team, early on. Here, in the third film, it’s Mel Gibson as the villain, shooting Terry Crewes. There’s no reason why this would be the person Gibson shoots when he has a clear shot at all of the team members, but that’s besides the point. Crewes is taken out of commision and the rest of the team members now have to go get this bad guy. What a plot. Regarding cast members, if there’s going to be a fourth film (and I imagine there will be,) let’s bring in Nicholas Cage, John Travolta, Howie Long, Jackie Chan, and Steven Seagal. Of that list, I doubt we see Seagal in the movie, simple because he’s become the kind of actor that nobody wants to work with, but even still. Throw him in for a cameo scene. And why not add Val Kilmer to the list as well.

The old guys to the rescue