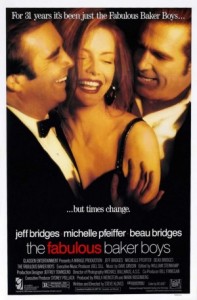 An honest and enjoyable movie, this film deserves a lot of credit for the cliches it carefully avoids, but it also does feel a little slow at times and doesn’t have quite enough memorable moments.

This is a good movie. It’s about two brothers who have an act that’s going nowhere fast. It gets so bad that night clubs start paying them not to perform. That’s when they come with the idea to add a singer into their routine and try something new. Suddenly there is a world of opportunity in front of them. Then some things happen, and the real conflict begins. This movie has some real strong elements working for it, such as a mysterious and dark character who also happens to be the protagonist. What it also does especially well is avoid cliches as if they were landmines, making the direction that the film takes very hard to anticipate or predict. There are some slow moments that could have been sharper, and there aren’t enough memorable stand-out scenes, but for the most part, this is definitely an interesting movie.

The Fabulous Baker Boys is an interesting and entertaining movie that just isn’t exciting enough to completely work. What is special about the movie is the way that it goes to great pains to avoid cliches. Whatever you think might happen in this movie doesn’t happen, and that level of suspense is a great thing. What doesn’t work is that the plot isn’t especially great, and there aren’t enough big moment or memorable scenes.

The movie is about two brothers, Jack (Jeff Bridges,) and Frank, (Beau Bridges,) who are a team of piano players working as entertainers at night clubs. They’ve been doing this same routine for years and the problem is that people just aren’t interested anymore. The jokes aren’t funny and the music is nothing fresh. At the start of the film, they finish a set at one club, and the booking manager says that he’ll call them. They try to get him to book something right then and there, and clearly he’s not interested. At the next place, it’s even worse. The manager pays them for two nights, but after they finish the set for one night, he tells them to just go away. He pays them for both nights, but still doesn’t want them to come back.

This puts the two of them in a rut. The movie does a nice job of establishing the character Jack as the bad boy. From the opening, where he is telling a girl that he just slept with that she will never see him again, to the way he’s got quiet rage behind those eyes, while playing the piano and answering his brothers questions on the stage, you can tell is guy is both angry and unsatisfied. And his brother, Frank, is a pretty good character as well, being the nervouse, phony businessman for the two of them.

They decide to hire a singer to go along with their act, in order to spice it up a little. So the two of them hold auditions. Now, audition scenes are usually cliches, and this one is not anything great, but at least it doesn’t have the different people who come in all act like idiots who are actually trying to not get the job, (like, say, the auditions in Van Wilder.) Instead, it is just a lot of women who have bad voices, and nothing more. Then Michele Pfeiffer stumbles in. She is playing a character named Susie Diamond who used to be an escort. When she gets in there, to the auditions room, she is over an hour late. Frank doesn’t even want to hear her, claiming that they are all packed up and ready to go home. She calls their bluff, figuring out that they haven’t found anyone worthwhile yet. That’s when she sings and blows them both away.

At this point they hire Diamond and start gearing up for their first show together. She arrives to this show fashionably late as well. Her dress is something that doesn’t work for the venue, and so Frank and Jack quickly run over to the nearest clothing story and help her fit into something more appropriate. This scene is very funny, but it would never appear in a movie of today. Throughout the store, Frank is throwing clothing at her to try and then throwing her around, grabbing Diamond by the arm and marching her all over the place. There’s no way a movie gets away with something like that now. Still, for the time it was in, and for this movie, it definitely works.

The three of them now perform together for the first time and it’s fantastic. Susie Diamond adds a lot of character to their show. Suddenly the audience isn’t sitting around listening to two guys sitting behind pianos, but is actually watching a beauty stand up and entertain them. Adding this singer makes an immediate world of difference. The same guy who said he would call them at the start of the film, now tries to book them a week in advance and gets his same reply handed back to him, with the boys telling him, “we’ll call you.” At another venue, the team of performers gets everyone in the room up on the dance floor, having a good time.

All of this is interspersed with other scenes of Jack. This is the rare movie that makes the mysterious and dark character the protagnoist, and yet still manages to keep him a mystery. There’s the girl who lives in the apartment above him and always sneakes down to his apartment when he mother has a guy over. Then there’s the do, who he loves so much he has to stop by the animal hospital to check on him, the night he has brought the dog in. Jack ends up grabbing the guy who is working there by the collar and insisting that he turn the dog over to him right there. We definitely get the sense from all this that Jack is a badass, and a character we want to spend more time with.

And then the romance starts. We knew it was bound to happen with one of the brothers, but the logical prediction is that both of them will fall for Susie Diamond and that they will compete for her, (like Keeping the Faith or something,) and that they will let this divide them. The Fantastic Baker Boys goes a different route. In fact, the romance isn’t even really romance as much as it is a one night stand that happens exactly twice. The first time is on New Years Eve, and its pretty memorable as these two characters who have no one else, and no place to go, are left stuck in the show room after everyone else is long gone. The second time is not nearly as memorable as the first.

When Susie leaves the boys to go her own way, the two of them continue playing together. This goes on until they do a telethon one night, working for free, under the believe that publicity on television, as well as the charity profit situation are well worth it. Only Jack keeps finding out more as the night goes on, that he is not so happy about. First he finds out that the telethon is being broadcasted on a nothing channel in the middle of the night. Then he finds out that the charity is not even for handicapped kids or something like that. Instead, it is simply to get new sports equipment for a school, and possibly a new gym. When the guy running the show is especially rude to them, and even cuts them off mid-performance, Jack lets him have it.

He lets his brother have it too. Now every movie, whether it is about a friendship or a romance, has the big fight in the second half, where the characters go their separate ways. And they always make up and come back together for the ending, often apologizing and learning from their mistakes. It’s the way these stories always go. Only The Fabulous Baker Boys is different. It is more truthful and more thoughtful and that really goes a long way. It’s the second major cliche that the movie avoids. The third goes along the same lines. You would think that these two end up playing together again, just like how the movie began. The circular ending and wisdom behind it, would be that Michele Pfeiffer was the new element added to their routine, and she came in, spiced things up, and then left. At that point, they would be right back where they started. Only the movie has more respect for us than that. It definititely gets a little too slow at times, but for the most part, this is a pretty honest and entertaining film.