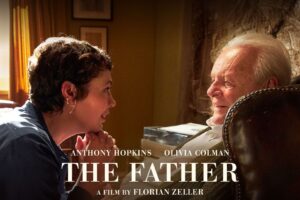 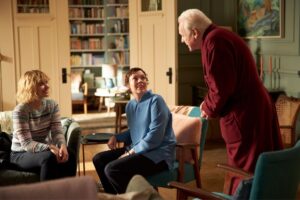 To call the Father creative and thought provoking would be an understatement. The thoughts that it provokes are about trying to figure it out. And that happens to be a very good thing with this movie, since it tells its story from the point of view of a man with dementia.  We see things as he sees them, which means not always in order, and sometimes featuring different actors in the roles that are already occupied by other actors in the movie. It’s complex, but not in a frustrating way. Instead, it’s more intriguing, like a puzzle. The movie tries to keep the amount of scenes and characters limited, to help us along, like a play. And that turns out to be a pretty smart strategy, allowing us to really see things from this characters perspective.

The Father is a pretty unique and dramatic movie. It tells the story of an older man with dementia, and it does that from the character’s point of view. The man is Anthony (Anthony Hopkins,) who lives in a flat that he believes to be his own and has daily check-ins from his daughter, Anne, (Olivia Coleman,) who may or may not actually live there with him. The problem is that a lot of what we are seeing might not actually be happening at all, or might be a flashback to an earlier time. And since it isn’t clear to Anthony, which is which, and what is really happening, it isn’t super clear to us either. And so we, the audience, have to sort of put the pieces together, and examine the clues to figure this thing out.

While some audiences might definitely have problems with this sort of thing – after all it does take some work, and is definitely not obvious – it’s also kind of fun. And to see things from the point of view of a character who believes everything he is experiencing is real and is actually happening, changes the dynamic quite a bit. Suddenly the events of one scene have to connect to another, no matter how crazy the connections might seem, because they have to connect for poor Anthony in his mind. It’s all a bit of a puzzle, and to make things easier for us, the movie does feature the same set of characters (only seven total,) and pretty much the same location, kind of like a play.

The movie begins with Anne coming to see her father, and being frustrated because he has just driven out another caretaker. There was a woman who was coming by to take care of Anthony each day, and he accused her of stealing his watch, and hit loud and angry with her. Now Anne is in the position of finding someone new to take care of her father, fast. The scene also includes Anne telling Anthony that she will be moving to Paris to live with the man she has been seeing.

That opening scene sets up a lot and seems to put us on the right footing to have a clear picture of what’s going on, but boy are we thrown for a curveball in the following scene. What happens next is Anthony walks into his living room and sees a man sitting in one of the chairs, reading a newspaper. Anthony asks who the man is, and the man claims he is Anne’s husband, and that he lives there. Thinking that he’s the one with the problem, and that he must be mistaken, Anthony eventually accepts that this man is telling the truth, and we do too. Especially since the man seems so certain, mentions Anne by name, and even calls and speaks her up to tell her to come home.

And then Anne walks through the door. Only she’s played by a different actress than Olivia Coleman. This time Anne is being played by Olivia Williams (Rushmore.) And just like with the man in the living room, at first Anthony questions her, before coming to the conclusion that he must be wrong, and just accepting that this is his daughter. Now, through all of this strangeness, we are uncertain of what’s happening (it’s still very early on in the film, and we sure don’t have the answers or enough clues just yet,) but what we don’t suspect is that there might actually be two bizarre things both happening at the same time here. The first is that this might very well be a flashback, to a different time when Anthony’s daughter came home with chicken for dinner. And the second, is that these actors who are playing these parts are not actually the characters that they claim to be.

The movie knows how complicated all of this is, and how overwhelming it must be for us. On the one hand, it doesn’t want to sugar coat things, because it wants us to see the situation from Anthony’s point of view. On the other hand, it doesn’t want us to get lost, and so it continues to repeats parts of this coming home with chicken for dinner scene – throughout the course of the film. Almost like a Groundhog Day – repeating a scene again and again in all different ways, or like a movie that examines the same scene from all different points of view (like the mall department store dressing room sequence at the end of Jackie Brown,) this approach to the chicken dinner situation definitely helps. Each time we see it, or see a different angle of it, we get more information, and this helps us put even more of the pieces together.

And the movie has fun with us during these moments too. But it isn’t out of tricks yet. Not by a long shot. In one incarnation of the scene, we see Anthony in the hallway overhearing a talk between Anne and her husband. Then we move onto the dinner scene that we assume happens afterwards (the chicken dinner, of course,) and watch as it leads us into.. the moment where Anthony leaves the table and then finds himself in the hallway overhearing the conversation between Anne and her husband – the same conversation that began this sequence. This means that we are now seeing things out of time. It might seem confusing, but thinking about if from Anthony’s perspective, all of this actually makes a whole lot of sense. In his mind, he must have thought about the time when he overheard the conversation, started thinking about that moment, and then went back in his head to the moments leading up to it.

The limited amount of characters goes a long way in this movie. There’s the new caretaker, played by Imogen Boots, who only has two scenes here. And then there’s Anne’s boyfriend, played by Rufus Sewell. This actor always had that menacing look, no matter what movie he’s in. He’s one of those guys who was born to play the villain. Here, he doesn’t have nearly as much of a glamorous role as he’s had in other films (Dark City, A Knights Tale, The Holiday,) but he definitely makes an impact. Here, he doesn’t like that Anne is letting her father live with them, and thinks that she is enabling him, instead of actually helping him. But Paul’s motivations might be more selfish than caring. After all, Anthony staying with them did just cause Anne and Paul to have to cancel a vacation they had scheduled for some time, because they needed to Sam Ray home to help Anthony find a new caretaker.

We only get a small amount of scenes outside of the flat, and that limited number makes each one we do get much more meaningful. There’s the scene where Anthony and Anne go to see a doctor, and Anthony insists it is his daughter who keeps mixing things up. Then these the flashback to a moment where we see what really happened to Anthony’s other daughter, as he walks down his hallway, opens a door, and steps into a hospital corridor. The other daughter is a thing of mystery throughout most of the movie. We slowly find out what happened to her, but aside from that, Anthony tells others, right in front of Anne, that his other daughter was his favorite. It leads to some pretty hurtful moments.

While this is clearly a dramatic and sad movie, there’s also some humor in it as well. Anthony’s obsession with his watch becomes quite funny at times, like early on when he insists the housekeeper stole it, then goes and looks, finds it, and claims the only reason she didn’t steal it is because he hid it. Or when he interrogated Paul about the watch, thinking that it might be his watch that Paul is wearing. He goes so far as to ask Paul if he kept the receipt for the watch. And then there’s the moment where he meets his new caretaker and tries to impress her by pretending he was once a tap dancer. These moments help lighten the tone from time to time, and they are nice break from what is actually a pretty intense storyline.  As a bit of a puzzle box movie, trying to figure it all out, and seeing things from the perspective of a character who is seeing things through a distorted reality, this movie is definitely different. It’s definitely creative. And like Minari, another great film they came out this year, and also takes some work to really figure out, the experience of making sense of it all, is very rewarding.