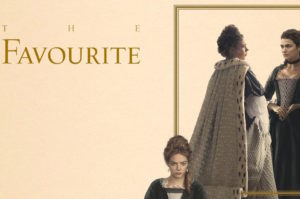 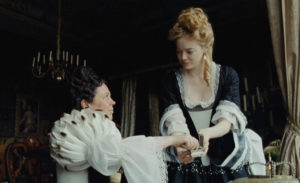 A viciously dark, but pretty great movie about manipulation, deception, and the ridiculous antics surrounding royalty.

This is a hell of a film. It’s the third American movie by director Yorgos Lanthimos, and definitely the one that shows what he’s been working towards. In this movie, nearly everything works. The comedy has bite to it. The women might be savage to each other, but they do it in such a secretive way, that what happens behind the scenes is even more important than what they actually do in front of each other. This is a movie about a servents rise to power and how she has to play dirty in order to get there. The three women actresses are all fantastic at really giving this thing life, and the director has a field day with showing off his bag of tricks throughout the halls of the mansion. It all comes together nicely in This dark and humorous movie.

The Favourite is the latest a movie from Yorgos Lanthimos, a Greek director who broke into Hollywood a few years ago and hasn’t looked back since. Like Martin McConagh, last years golden child at the Oscars for directing Three Billboards (after having made In Bruges and Seven Psychopaths,) Lanthimos has been kicking around for a few years, but is just getting mainstream appreciation now. His first American movie was The Lobster, the bizarre Colin Farrell film about people living in a hotel until they turn into animals, (like I said, bizarre.) He then followed that with The Killing of a Sacred Dear. And now, he’s going for royalty with The Favourite, giving us a very smart and darkly funny film.

The movie is about two women who compete for the love and attention of the Queen. These women are Abigail (played by Emma Stone,) and Lady Sarah, (played by Rachel Weisz.) The Queen, (Queen Anne, played by Olivia Colman,)  is basically a big kid with the maturity level and intelligence of a toddler. And so it’s not really about outwitting her, for the two women, but instead, it’s more about outwitting each other.  And for Abigail, in particular, there’s quite a long ladder to climb in order to get anywhere near where she wants to be.

When Abigail arrives at the palace, she is riding in a carriage, squished into a seat, packed tight with a bunch of other dirty looking people. She is thrown out of the carriage, and lands right in the mud. And that’s how she arrives at the palace, where her cousin, Lady Sarah, is the Queen’s top advisor and best friend. When she gets there, Abigail goes to the kitchen to work. Only the kitchen staff has a little fun with her, sending her down a hallway where she will come across Lady Sarah, while still dressed in her mud-covered clothes.

While we see what Abigail is dealing with in the kitchen (including a scene of her using lye to clean the floors, burning her hands, and being told that she might want to wear gloves next time, afterwards,) we also see the interactions upstairs between Lady Sarah and Queen Anne. Lady Sarah is the younger, smarter of the two, and she doesn’t hold back when it comes to telling the Queen anything at all. So early on, we watch the Queen strut into the room, excited to take a meeting with someone, all done up in her makeup. And then Lady Sarah stops the Queen in her tracks to point out that the Queen looks like a badger, and does it so convincingly that the Wueen can’t help but agree.

While Queen Anne does love Sarah and regards her as her most trusted advisor, make no mistake, the Queen has the power. Between the two women, even behind closed doors when it’s just the two of them alone, if the Queen needs to be serious and show her authority, she will. And that happens somewhat early on, when Lady Sarah orders a military attack and says it is the Queen’s wishes. When the attack goes horribly wrong, Queen Anne slaps Sarah across the face in anger. She may be a buffoon, but she’s still the one in charge.

Abigail, meanwhile, hears about Queen Anne having great pain in her legs and finds some herbs in the garden that might help. She sneaks into the Queen’s bedroom one day and applies the herbs while the Queen is sleeping. Lady Sarah shows up and puts a stop to this. She also has Abigail sent down to the kitchen to be beaten. Only the herbs actually work and Lady Sarah has to send someone to stop the beating and to bring Abigail back up. Only the herbs are just the beginning. Abigail slowly starts manipulating her way into the Queen’s inner circle.

She comes and plays with the Queen’s rabbits one day, sitting on the floor with them, with the Queen, and it’s the equivalent of getting down in the floor and playing with a child’s toys with the child. Playing with the rabbits is something that Sarah never does. And when Abigail discovers a secret, she uses it not to blackmail or change people’s feeling about Lady Sarah, but instead to do the same thing for the Wueen and therefore replace Lady Sarah all together. The second half of the film takes some very dark turns as Abigail shows us exactly what she’s capable of. It’s the All About Eve, Boogie Nights, Scarface, and Showgirls formula about starting out small and then letting the power go to your head as you get more of it. Unlike those other movies though, hear Abigail doesn’t just become arrogant, she becomes evil. She shows us a dark side that we never thought she was capable of, and seeing it emerge is pretty cool. A lot of credit for that should go to the actress, Emma Stone, so perfectly cast here as someone we would never expect to have such a dark side lurking beneath.

While this movie might take on a familiar formula and story arch, the style and approach to getting there are pretty unique. There’s a reason why this movie is up for so many Oscars, and it’s mainky because of the unique and creative approach to telling a story that we’ve all seen before. Between the music and the camera shots, this one is extremely artistic and unique. For background tunes, this movie often features just one string being played or plucked, over and over again. For the audience member, this creates a feeling of being uncomfortable, almost like out of a horror movie.

And the movie has plenty of other tricks up its sleeve too. For example, it does the opposite of what we are expecting, even when we are pretty sure that we’re right. The scene of Abigail in the library looking down on the secret she has uncovered, is pretty great. She decides to sneak downstairs, and we just know she’s going to knock something over it fun into something and give herself and give herself away. Only she never does. We are practically screaming at the screen, “what are you doing? Just stay there until this is over.” And she keeps walking, right past the two women. We are so sure she is going to knock something over, and she doesn’t. This director is smarter than that. He’s not going for cheap laughs, but for creative ones.

And with visuals, this director brings a unique style into the mansion. He uses low-angle, panning shots, as if through a spy-glass, to show us the rooms, at all different time during the course of the movie. What this does is it distorts the ways the halls or rooms look just enough to give you a complete field of view and let the spaces really open up. This lets the viewer feel like he or she has a sense of the hallway or the space, and understands the layout of the room. It’s funny how you need to distort the image in order to let the audience actually see more. And it works. So does the movie as a whole. From the slow motion shots of the men conducting idiotic games (duck racing or throw the tomatoes at the fool,) to the rivalry and manipulation with the women. We may have a darkly familiar plot, but the style, setting, and way this treacherous story is handled is completely original.