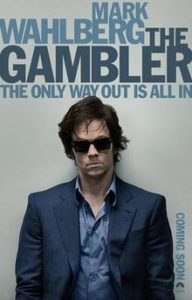 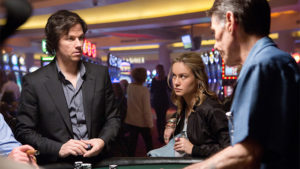 A very lousy movie that has a lousy story to tell and does a pretty terrible job of telling it.

Not a good movie at all, this one has a strong cast, (including Brie Larson, before she made it big,) and a talented director, (at least, based on his breakout film, Rise of the Planet of the Apes,) but boy does it go wrong in a whole lot of ways. It’s a movie about an addict. Here’s a guy who is addicted to losing. He plays until he loses, which would be a fine technique, if he wasn’t losing everything. He literally bets everything he’s got on every hand and keeps betting it until he loses it all. Sounds kind of interesting right? It is at first, but then it just gets depressing. Especially when you see the great lengths this guy will go to in order to get or borrow the money, just to immediately lose it afterwards. The gambling scenes are actually the more interesting ones. The scenes of this character, played by Mark Wahlberg, giving lectures as a college professor, border on being torturous. This one is just awful, all around.

The best thing I can say about The Gambler, is that it’s not unwatchable. Somehow, for some unknown reason, it’s not that hard to get all the way through. That, and that the movie has good people in it. Both in front of the camera and behind it. But those things can be told before even watching this thing. The whole, in this case, is not the sum of the parts. The movie probably should have worked, but it most certainly does not. And there are plenty of reasons why, most of which should seem pretty obvious, or should have to the people making this movie.

Let’s start with the good. The cast. Mark Wahlberg is an A list star for a reason. He is not a great actor and still sounds like his Marky Mark persona from a former life, before he became an actor. But Wahlberg has made a career out of landing some generally pretty good movies, (and also plenty of stinkers.) He has found a handful of roles that are just right for him. From Fear through The Departed, (which Wahlberg was actually Oscar nominated for,) he has been in a string of movies that came down to good casting decisions, (Boogie Nights being the best of all of them,) and has even found some success with comedy, (The Other Guys.) The Gambler is a low point for Wahlberg, (although he has had others that are probably just as low, such as The Happening.)

Speaking of that movie,  in The Gambler, Wahlberg is playing a professor. He does not look, sound, speak, or act like a professor. The last time he played a professor was actually in The Happening, and that movie will go down in history as the worst movie of Wahlberg’s career. So maybe playing a professor isn’t a just right role for this guy. Here, he does it by calling out his students and analyzing their lives. He directs the whole class to study this one student as he directs the person. And then does it to another student. There’s something to be said for an unconventional teacher or professor, but there’s also something to be said for a character who would never exist in reality. This professor doesn’t even really teach anything.

Getting back to the cast, aside fromWahlberg, the cast is filled with bright stars. There’s Brie Larson, from before she was an mega star, (this movie came out two years after 21 Jump Street, when people were just starting to learn who she was.) There’s also John Goodman and Jessica Lange as the veterans. And then there’s Michael K. Williams, so good on HBOs The Wire, (Omar coming y’all,) and so bad here. It’s not his fault. It’s not even Wahlberg’s fault. He didn’t write this garbage dialogue, terrible character, or lousy part.

But some of the credit, or in this case, blame, should definitely go to the director, Rupert Wyatt. And then some should go on the writers, James Toback and William Monahan. Toback, come to think of it, wrote the screenplay for the 1974 film, from which this movie takes the same story ideas and title. So if that 1974 movie, starring James Caan, was good, then that’s all Toback should get the credit or blame for. I’m guessing it was a hell of a lot better than this movie. Monahan on the other hand, is the guy who adapted the screenplay from the 1974 version to this current day form. So, this one is on him,. Monahan has written some very good movies, (The Departed, Edge of Darkness,) and also some very bad movies, (Kingdom of Heaven.) So he’s hit and miss, and The Gambler is definitely a miss.

And then there’s the director, Rupert Wyatt. Here’s a guy who had one other big movie, Rise of the Planet of the Apes, and it was a tremendous success. But he never returned for the sequels. The reason is because the studio wanted to go  in a different direction with the story, then what he wanted to do with it. Who knows how the sequel would have turned out if he made it. All we know is that without him, (Matt Reeves took over,) they were pretty good.. But Wyatt made the first movie, and that was the one with the hardest job to pull of. That was, a movie that defied the odds, Nobody thought that movie was going to be good, starring James Franco, and remaking a series that Tim Burton had tried to remake, (with Wahlberg ironically,) and failed.

So now that the behind the scenes “parts” have been figured out, let’s dive into the actual film. Wahlberg plays literary Professor Jim Bennett. He’s an author who wrote a novel that did well with critics and is known to be a good book, but didn’t make him a whole ton of money. And he hasn’t written anything else since. Sounds a little like Wonder Boys, the great Michael Douglas movie. But this movie isn’t really about Bennett the novelist. It’s about Bennett the gambler. When it opens, he drives to a high stakes mansion filled with gambling tables and elite players. Bennett bets ten thousand on blackjack. He wins. His money doubles. So he’s now got twenty thousand. He bets it again. He wins. He now bets forty thousand. Then eighty thousand. And here’s the problem. You know at some point he’s going to lose. He has to know that at some point he’s going to lose. Nobody wins every hand. So for him to keep putting down everything he’s got, including all of his winnings makes no sense. Pocket some of the money and play with the rest. Otherwise, it’s only a matter of time before you lose it all, even if you win twenty hands and lose only one. That one hand will wipe you out completely.

And this is how the movie starts. It definitely gets our attention, but it’s also incredibly frustrating. And a big problem is that it has no context. Who is this guy? Why do we care if he wins or loses? By not showing us anything before this, it makes the weight of the scene much smaller than it should have been. Rounders did something similar, by having the Matt Damon character lose a huge pot at the beginning, but it used voice over to take us through what was happening in the card game, and more importantly, to get us acquainted with and caring about the character as fast as possible. The Gambler doesn’t seem to care.

At the end of the night, Bennett owes large sums of money to two different men. There’s the Korean older man who runs the mansion, and then there’s a loan shark, (Williams,) who stakes Bennett a large sum of money and then watches as Bennett loses it all. He has seven days to repay everything, (that’s the time table the Korean man gives him.) And so the story of him trying to get the money back begins. Now that setup could have worked if the story that followed it was a little better. I do like the seven days countdown and the way the movie keeps showing us what day it is. But nothing that happens during those seven days is very good or really on the right path.

Let’s put it this way. At one point Bennett’s mother, (who is apparently crazy rich,) goes to the bank with him and takes out all of the money Bennett owes, and just hands it to him. Now all he has to do is bring it to the people he owes and pay them. And instead, he goes right to the nearest casino and loses it all. What is wrong with this guy. Even if you can get past the opening scenes of him just playing stupidly, there’s no getting past, or excusing this. There’s no excusing him from having a fling with one of his students, (again, look at Wonderboys for how to do this kind of thing right, having the professor get tempted by the student, but not taking the bait.) And there’s no excuse for his decisions at different points of the movie to play roulette and put all of his money on a single color. This is the dumbest kind of betting there is, because it requires no skill and there is nothing a player can do. But this movie is just that stupid. Bennett even gets college students who are promising athletes to corrupt themselves and break the law in the interest of throwing games or doing things to make money. We see why one of the students (Llamar, the basketball player,) would take the bait, but have no idea why the other one, (a tennis star,) would bother. This movie has nothing intelligent going on. Even John Goodman is wastes, and his “F U” speech is about as lifeless as it gets. What a mess of a movie.