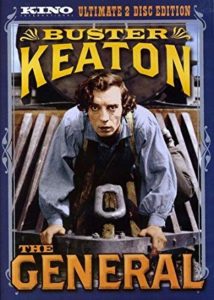 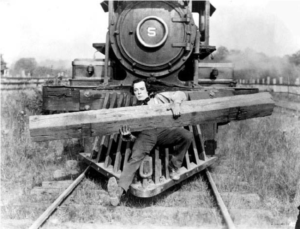 An okay silent movie, that certainly doesn’t measure up to some of the better films of this genre.

Not a great Buster Keaton movie, or even a great silent movie, this is the movie the star is probably most known for, and that’s a shame because he has turned out much better work. Sherlock Jr, in particular is far superior to this movie. The film is so well-known mainly because of how big some of the stunts are. Not a lot, but two or three of them, were unique for the time. There’s one, where a train crashes through a bridge, that was the most expensive stunt of the silent film era. So what? If the movie is boring other than that, then who really cares? Sure it must have been exciting to see back then, but watching the movie for that reason today seems pointless. The problem here is that the story really just has Keaton’s character, Johnny, riding around in a train the whole time, trying to stop the enemy, who is on board another train. He does this by both setting traps and avoiding them (the ones the enemy has set for him.) And that premise could have been enough, at least for comedic purposes, if only the traps were better. Here, they are nothing special. A log in the middle of the road or a water spout that comes down and empties water on the passers by for just a moment. Keaton has made far better movies than this one. Here, the best parts are the ones that exist in quiet, indoor locations, (the recruitment office or underneath the enemies’ dinner table,) where you can actually see funny interactions plays out. Unfortunately most of this movie is on the trains, where things are pretty dull.

The General is for some reason one of the better known Buster Keaton movies. It’s not one of his better movies, and most certainly not his best. That honor goes to Sherlock Jr., a movie that combined mystery and adventure with fantastic action. The General, on the other hand, is a historical film, set in the back drop of the Civil War and the military. It is so well known because of how many extras were involved and how big the scope of the movie is. This thing takes place primarily on a train and does feature some fo the biggest stunts of its time. In particular, a shot where a train drives over a bridge and the bridge collapses. That, apparently, is the most expensive stunt in the entire era of silent films. Now, considering that at the time when this movie was made, silent films were the only thing that existed, this means that the shot was the most expensive stunt in cinema history, (at the time.) So, you can imagine, everyone must have been talking about it, and must have wanted to go see this movie in theaters, (there was no home video or you tube, or any other way to see it.) Maybe that’s why the movie is so well-known.

But unfortunately, the movie is not all that good. It has a pretty simple story, and really not a whole lot going on. Buster Keaton plays Johnnie Gray, an engineer in the south during the time of the Civil War. He has two loves in his life, (as the title cards tell us,) a woman named Annabelle Lee, and his train, called The General. During this time, every able bodied man in the south is rushing out to enlist with the army and fight in the war. Annabelle encourages Johnny to do the same. And so he goes to the registration office and gets on line.

When he reaches the window, Johnny is asked about his occupation. After revealing that he is an engineer, the recruiter goes to check with his manager and is told that he should reject Johnny. The job his currently doing is too valuable to them and he would be of better service by still doing his job, then he would as just another man in the army. And so Johnny is rejected, without ever being told the reason why. But Johnny doesn’t give up that easily. He grabs a hat, puts it over his face and gets back on line again. He gets to the window and tries to cover his face as much as possible, while this time offering a new occupation to the recruiter. And we watch as the recruiter slowly notices that something is familiar and eventually pulls the hat away to reveal that this is the same man he rejected just moments earlier. Johnny is then booted out of the office.

This is the funniest and best moment in the movie. It happens early on, which is a shame, but it’s great because it actually has real human characters, motivations, plans, and expressions. It reminds me of some of Chaplin’s great work, like the boxing match in City Lights, where he spends most of the match hiding behind the referee until he can get a clean shot at his opponent. Or the moment in Sherlock Jr where Keaton is riding on the front of a motorcycle that is being driven by a guy sitting behind him, only he doesn’t know that the driver has fallen off the bike. So Keaton continues to talk to him, telling the driver to slow down, and then eventually turns around to see that there’s nobody there. But most of the General doesn’t feature this kind of thing. Instead, it’s basically a movie about a lone man on a train, trying to avoid traps and also set traps for the other trains.

After Johnny is rejected, he passes Annabelle’s brother and father who are on their way to the recruitment office themselves. They ask Johnny to come along and he sadly says no, and then keeps walking. Later, when they return home to Annabelle, she asks them if they saw Johnny at the office, and her father and brother tell her that Johnny refused to go, and instead was a coward. This seems to break Annabelle’s heart. She tells Johnny she never wants to see him again.

Some time passes, the war is raging on, and Annabelle gets word that her father has been injured in battle. She decided to go visit him at the military hospital. In order to do this, she must board a train, and it’s during this train ride that a bunch of norther soldiers come up with a plan to hijack the train. They decide to do it during a rest stop, where all of the passengers have gotten off, and then to use the train to destroy all bridges in the south, making it impossible for the southerners to get men or supplies where they need to during the rest of the war.

When the moment comes for the northerners to steal the train, Annabelle is still on it. And so she is kidnapped as their hostage. Which makes Johnny’s motivation to rescue the train even stronger. He grabs another train to go chase it down, filled with army soldiers who are going to accompany him on the mission. Only the car with the soldiers isn’t hooked up to the engine car ( a gag that Keaton would repeat again and again in different films, from the missing bike driver in Sherlock Jr to a movie where Keaton hung onto the back bumper of a car as the car drove away,) and so when Keaton rides off, the soldiers are left in place watching him go.

So now it’s Johnny all on his own in an engine train car chasing down the enemies. And it isn’t long before they catch on that there is a train after them and start laying traps. These include the one that is most famous, where they put a long in the middle of the track. The reason why the scene is so famous is because of how Johnny reacts to it. He is sitting on the front bumper of the train car and grabs a different log. When the train gets real close, he uses the log he’s holding to smash the log on the tracks by slamming his log down in exactly the right spot. The log on the tracks goes flying up and nearly hits him in the face. Keaton flies backwards to avoid it. It’s a cool stunt, although I’m not convinced that the log which could have hit him wasn’t really made of foam or something.

The rest of the movie pretty much consists of this sort of thing, although not nearly as impressive. But it’s all about the guys on one train trying to stop the guy on the other, and that might be kind of cool if it were filled with tons of crazy stunts. Instead, this is mostly about seeing confused looks on the actors faces as they try to figure out where the other train is. Other than the one or two huge stunts, (one, of course being that train on the bridge crash,) the stunts in this movie really aren’t that interesting or impressive. One example is a moment where Keaton is on the train riding past a water tower and a pipe falls on him with water coming out of it. Then he rigs it to fall on the enemy train behind him. But that’s all that happens. Knowing his other movies, one might expect Keaton to hold onto the pipe and swing around on it from one part of the train to another. After all, this is the guy who rode a motorcycle over two moving trucks that were filling in the gap between one end of a bridge and the other, in Sherlock Jr. He could have done better than this.

It is because most of the stunts aren’t all that interesting in the movie that the better moments are actually the smaller, quieter ones. There’s the moment at the recruitment office in the beginning, and then there’s another moment towards the middle of the movie where Johnny sneaks into a house of the enemy. He thinks nobody is home, but soon realizes it is the meeting place of the enemy and they are about to sit down to dinner. At that point, Johnny crawls under the table, and remain there throughout the dinner, being accidentally kicked and even burned by the soldiers at the table. These are some of the better moments in the movie. But there aren’t many like it, and for the most part this movie is pretty dull. People must have loved this film at the time, because there really wasn’t anything like it. A whole movie set on a train where a guy is fighting in the Civil War. It’s not even that the movie doesn’t hold up compared to films of today. The problem is that this film doesn’t hold up compared to other movies in the genre. From Sherlock Jr. to City Lights and The Gold Rush, the silent movie genre is filled with physical gags and The General just doesn’t have enough of them. And it doesn’t have an interesting enough story to make up for not having them either.