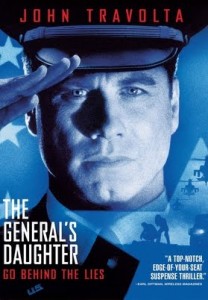 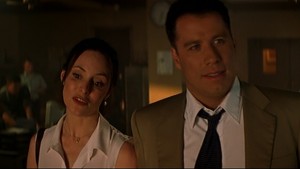 A movie with a simple initial premise and some silly moments early on that gets better and more intricate as the mystery unfolds.

The General’s Daughter is a cool mystery where the more plot threads the detective discovers about what appeared to be a simple murder, the more interesting the movie becomes. It does take a little while to get going, but once we get passed a somewhat lengthy introduction, it turns into a sharp and shocking mystery. the crime being investigated involves a young female army soldier who was tied up, raped, beaten, and murdered. and the woman is the daughter of the high ranking and prominent general, played by the great james cromwell. john travolta is the soldier-detective who is brought in to investigate alongside his former love interest and now investigating partner madeline stowe.

For the first ten minutes or so of the movie, travolta’s character, Paul brenner, is stationed undercover somewhere in the deep south, living on a houseboat and speaking with a terrible southern accent. it’s meant to be a fake accent that the character is using, and so i suppose it is intentionally bad. after all, travolta’s imitating a guy who is imitating the accent. paul has a couple of run-ins with the man he is trying to catch in a weapons deal and it all ends when the man comes to his house boat to attack paul while he is asleep. it’s meant to be a lively beginning, and it’s not slow or anything, but it does overstay it’s welcome and take more time than it should. especially since it really has nothing to do with the story of the movie at all.

Also in the first part of the film, paul meets The General’s Daughter, elizabeth, when she helps him change a tire at the side of the road. he then brings her a basket of bath products to thank her. and we even get a scene where the general is giving his farewell speech to the high ranking officers of the military, during which we get to see all of the players in the room who will factor into the story later on as potential suspects. we see timothy hutton, james woods, elizabeth, and the general’s assistant, clarence williams III (excellent casting choice there.)

but the movie doesn’t really get started until elizabeth is found murdered. that’s when the real plot begins, anyway. paul is called in and the investigation gets underway. he goes to see her boss, james woods, who is also a sort of mentor of hers. woods and elizabeth worked in the field of psychological manipulation and so he has fun with paul as paul asks him questions with agendas behind them. woods takes the questions apart, dissecting them for what paul is really trying to get at and discussing these dissections with paul. it’s a little corny, but at least it’s something new. when you think about what this scene is trying to do, and not the way it actually sounds once it comes out, it’s actually pretty cool. and woods is a great actor to be put in a confrontational scene like this.

paul and sara (madeline stowe), go to elizabeth’s house and do some snooping around there. they find a hidden room filled with all kinds of devious secrets. especially the ones that are contained on video tapes. turns out elizabeth wasn’t such an innocent little girl and had some unexpected fetishes. some dusting for prints is done and we find that woods just might have been more involved than he led us to believe.

We’re now a solid portion of the way into the film, and things still haven’t really picked up yet. so woods is the bad guy. his fingerprints are all over the body. so what? even the interviews that paul and sara conduct don’t seem to be going very far. like when they talk to a female army soldier who seems to only want to talk about how hard it is to be a woman in the army. of course, she actually has more information to offer, like how there were multiple cars that pulled up to the body or something, but it kind of gets lost in the shuffle.

The real heart of the story doesn’t come into focus until paul and sara go out to west point where elizabeth got her training. this is brought to them by a mysterious file that is placed in paul’s car by an anonymous party. and once the two of them go out to west point and sit down with a psychological officer there, everything starts to come pouring out. this man takes them through elizabeth’s history and some traumatic things that happened to her while in training there, and suddenly the picture is a lot more clear.

it’s the start of the second half of the movie when all this happens, and really the start of the movie getting good. so far it has just been okay. but now it all makes sense. we learn secrets and learn about how those secrets might have led to characters making decisions that put them in the situation of the current murder. there’s a great scene where paul and sara go to see the general to discuss what they found out, and clarence williams turns out to have a surprise of his own to reveal.

But we’re not out of the woods yet. the great thing about this mystery is that it not only has red herrings, but also multiple layers. in that way it reminds me of the usual suspects, where as you get deeper into it, you start to think you know who it is, and they even tell you who it is, but they’re lying. there’s another surprise twist waiting just around the corner. it’s all about playing with the audience and this movie does that well.

The General’s Daughter is not a great movie, but that’s only because it’s first half is handled kind of carelessly. that shouldn’t be surprising considering the director is simon west, who really only made the movie con-air before this. that was an entertaining, but silly pop corn film for the masses. The General’s Daughter is certainly smarter and more complex than that. and once it gets to the second half of the movie, what was starting to feel like a dud suddenly wakes up. the first half wasn’t terrible or anything, it was just okay. but the second half is remarkably better. the solution just unfolds and unfolds and with each reveal we learn so much more about what really happened and why. it’s a very good movie that could have used a better first half.