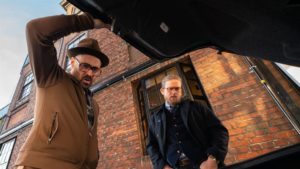 The fourth version of a cockney street level gangster movie by writer-director Guy Ritchie, this might be the genre that made his name, and that he does better than anybody else, but this fourth time around, it’s more about style than it is about story.

Not nearly as good as some of the better Guy Ritchie gangster movies, this one still has all the right ingredients and style. It has the ensemble cast, composed of lots of recognizable faces (McConaghey, Farrell, Grant,) the quick wit, the music, the montages, and the cockney accents. It’s got it all, and the result is a somewhat enjoyable movie, but nothing special. Let’s put it this way, Ritchie does this genre (English gangster film,) better than anyone, and if made by another filmmaker this would probably be considered impressive, but for Ritchie standards…it is the worst of his four. It’s just not exciting or interesting enough.

The Gentlemen is the fourth Guy Ritchie gangster film. These movies go back more than twenty years now, starting in 1998 with Lock, Stock, and Two Smoking Barrels. That movie is still considered by many to be his best. But he’s got plenty of other fantastic ones too. There’s Snatch, his more colorful and comedic approach, and there’s Rock N Rolla, his more serious and authentic approach. And all of these are terrific. This is the genre that Ritchie does best. And it’s the genre that he does better than anyone else. So when a fourth movie popped up, with the same kind of ensemble cast, the same level of A list or nearly A list movie stars, and the same kind of street gangster, cockney accent, one-liners tone, it looked like something worth seeing.

And in many ways it was. The Gentlemen is definitely the worst of those four Ritchie movies, but that’s only because the others are so good. And one has to remember that everything else Guy Ritchie has done (other than the live action version of Aladdin,) from Swept Away to King Arthur, has been pretty lousy. He even made a movie that almost falls into this gangster genre he does best, Revolver, which was awful. The only thing that kept that one from tarnishing his record of street level gangster movies was that Revolver was more of a prison gangster movie. It didn’t work.

But the Gentlemen, Ritchie’s fourth entry in the collection, (Layer Cake would be right up there, except it wasn’t made by Ritchie, but instead by his producer, Matthew Vaughn, during Vaughn’s first attempt as a director,) is okay. For all of the characters, skipping around in time, and use of voice over to narrate stories that may or may not have happened already, it actually has a fairly simple and straight-forward story. Maybe even a little too simple for its own good at times. For example, early on we see a drug kingpin, Mickey Pearson, show his secret lab to a potential buyer, Mathew Berger. And then the lab gets raided. And we are supposed to not know who raided it, or how they knew about it.

To clarify, once the lab gets raided, it seems pretty obvious that the party which raided it got the information from Berger. But when we do find this out, it is meant to feel like a surprise. Still, if not for simple connections like that, or revelations that reassure the audience they were on the right track with their theories, this movie had the potential to be incredibly confusing. And it wasn’t. Which is a hell of an accomplishment. Consider that the movie opens with a shooting at a bar where we don’t know who the shooter was, the reason why a character was getting shot, or even exactly who got shot. But we have the promise that this will all be revealed later, and so we go with it.

Then the present day story opens with Raymond (Charlie Hunam,) Pearson’s right hand man, getting a visit at home, in the middle of the night, from a detective named Fletcher, (Hugh Grant,) who is trying to blackmail him. And this present day story isn’t so present day after all, because Fletcher spends his time there telling the story of events that have already happened, which he has just recently found out about. Now, this isn’t a quick back story. Instead, it’s a back story that lasts for more then half of the film. Fletcher spends the entire night there, telling the story, and doesn’t go home until the next morning.

The story he tells is of Mickey’s dealings with Berger, as well as his snubbing of a newspaper reporter, named Big Dave, who is the one that hired Fletcher, out of spite. He has written his findings up into a screenplay which he has titled “Bush,” referring to the cannabis that Mickey grows and sells. Speaking of that, and getting back to some of the more obvious ideas that we are meant to be surprised by here, Mickey takes Berger on a tour of all of his property, taking about how in today’s tile of wandering, entitled tourists, satellites and drones, it would be impossible to hide a lab on the property. Then he takes Berger to a metal cargo shipping container. They step in, and of course there’s a staircase leading down to a giant underground lab. If you’ve seen the Dark Knight, where Christian Bale’s Batman stepped inside a cargo shipping containment unit and took an elevator down to a makeshift Bat Cave, then you know this is a possibility. And so it’s really not much of a surprise, although clearly it’s meant to be.

After Pearson shows this to Berger, an Asian gangster named Dry Eye, comes to see Pearson, looking to buy his labs. Pearson refuses to sell, (even though that’s exactly what he’s trying to do with Berger.) Then the lab gets raided by a bunch of athletic youngsters who are a combination of MMA fighters and BMX racers. These kids are right out of Kingsmen, representing low-level, tough-talking, youngster life. They have a trainer tho they report back to, named Coach (Colin Farrell,) and when he hears who they robbed, he’s not too happy. Coach takes it upon himself to go meet Raymond, apologize for the mistake of his students, and do whatever he can to make it right. This includes completing about three or four tasks that will help Raymond and Pearson with their business troubles.

While some of the story elements feel too simple, or too unwilling to have real consequences, (there’s a scene where a character guns down another at a bar, which seems great, until we realize it’s all just a fantasy,) it’s the characters who keep this thing alive at all times. Like nearly all Guy Ritchie gangster films, the characters are a combination of funny low life’s and uniquely interesting men who wear their principles on their sleeves. Between Fletcher, Pearson, and Coach, this movie definitely has its share of entertaining characters.

It also has Guy Ritchie’s Uber talented visual style. Ritchie has been a master craftsman at the montage for some time now. That includes quick editing between shots, momentum building actions by the characters, and music that convinces you something big is about to happen. It tells you that there are about to be real consequences, and that we should be on the edge of our seat. In this movie, more often than not, the follow through on those consequences is not all that strong, but the promise is definitely there and is handled with precision. Let’s put it this way… the setup is fantastic, but the follow through is often lacking.

The Gentleman is certainly not one of Ritchie’s best movies, but it’s not bad either. For anyone else, this movie would be a huge achievement. But for Ritchie, who is really only up against himself in this category, it doesn’t work as well as some of his others. In fact, of his four street level gangster movies, this one is the worst. It’s just a little too basic. And it’s attempts to shake that up, (telling half the story as a flashback,) fell kind of forced. Still, there’s no denying that the artistry and talent are there, the characters are there, the witty dialogue is there, and the visual style and momentum are all there. That’s a lot that works about this movie. Sometimes you just need a little more to glue all the pieces together and make them stick.