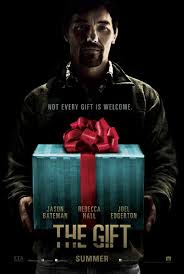 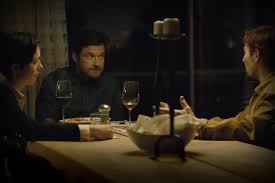 A pretty cool thriller that goes in some very unexpected directions.

A mystery-thriller that feels familiar up until its second half, where it suddenly throws one monkey wrench into the equation and becomes a very different film as a result. This starts out like the usual stranger-stalker movie, with a strange character becoming a new and uncomfortable presense in the lives of a happy, young couple. It turns out this isn’t just a torn lover or blackmailing ex, like most of these movies feature, but a man who has secrets about a character’s past. Discovering what those secrets are, and how much they impact the story becomes the fun and unexpected path of this film.

The Gift is an entertaining thriller. It’s one of those movies that feels very much like other films we’ve seen before about stalkers and psychos that won’t go away, except for one difference. This time there’s back story and there are secrets. So this film has a leg up on the Fatal Attractions and Unlawful Entry’s and Single White Female’s of the world. The trailers tell you that there’s an underlying secret, much the same way that the trailers for What Lies Beneath gave a little more away than it really should have. After all, the secrets and backstory don’t really come out until the second half of the film. A good case could be made for the argument that a trailer shouldn’t really reveal things from the second half of the movie. Then again, marketing movies is a business, and you have to promise the audience something different from the other, similar sounding movies, that they’ve seen before. This film tries to do that.

The truth is the movie isn’t really all that unique. Regarding movies where characters have secrets, it definitely helps if the viewer doesn’t know there’s a secret to be looking out for, going in. Something like Side Effects handled that kind of storyline much better, taking us into a new world, that of pharmaceutical drugs, and then playing around with it’s story there. The Gift takes us into a world that we’ve seen many times before. Suburban life, and a character who tries to upset that. From suspense movies to horror (Single White Female, The Hand That Rocks the Cradle,) this is one of the most overdone genres around, and luckily The Gift does try to find a new and original angle for telling it.

Of course the first half of the movie is all pretty routine. We watch this young, married couple, Simon (Jason Bateman,) and Robyn (Rebecca Hall,) as they go looking at houses and settle on one that they like quite a lot. It is a unique house, with lots of wood panneling and huge glass windows. Not long after they buy the place and settle in, do they run into a man named Gordo (Joel Edgerton,) at a store. Gordo went to highschool with Simon. The two of them were never close, but they certainly grew up together, and after briefly touching base, they part ways. Little does Simon know, he has not seen the last of this man.

One day a package arrives from Gordo. From the posters and trailers, you would think it’s some mysterious gift that the characters study and analyze before opening, like that movie The Box with James Marsden and Cameron Diaz. Only it’s not. This is simply a bottle of wine. The thing that’s so strange is that the couple never gave Gordo their address. Another day, Gordo shows up while Simon is out and ends up getting invited in by Robyn and then staying for dinner. Simon, his wife, and Gordo sit around the table chatting about old times. Mainly Gordo tells stories of Simon as class president and how he always got things done around the school.

Another day, Gordo drops off some fish for them. Simon and Robyn notice the fish in their quoi pond, which is inside of their house. That means that Gordo got into their house to put the fish in the pond. This is getting weird. The couple has some friends over for a dinner party and they joke around about their new stalker. The friends tell Simon and Robyn that they have to cut Gordo off and make it clear to him that they don’t want him coming around anymore.

Simon and Robyn don’t quite have it figured out how they will go about doing this, when suddenly they receive an invitation from Gordo to come over for a dinner party. He has invited another couple too. Surprisingly, Simon and Robyn actually go. It’s a very strange scene. Of course, the other couple never shows up, but what makes it even more bizarre is that Gordo gets a phonecall which he insists on taking and walks out of the house. Then he gets in his car and drives away, leaving Simon and Robyn there. Instead of leaving, Simon and Robyn decide to snoop around and go through his things. This is a pretty exciting scene due to both our curiosity about what Gordo is up to and where he went, as well as our suspence of Gordo coming back and possibly catching the couple going through the house.

By the end of the scene, Gordo has returned, and Simon makes it very clear to him that he wants Gordo to leave them alone. And as soon as they tell him that message, bad things start happening to them. Their dog goes missing and their fish in the quoi pond all turn up dead. Why is it always a pet? Between the rabbit in Fatal Attraction and the dog in Fear, you’d think they would come up with something new. Then a note appears from Gordo, claiming that he was okay with letting “bygones be bygones,” but Simon wouldn’t accept that. Robyn becomes extremely curious and wants to know what this means. She gets no help in figuring it out from her husband.

This is what leads us into the secrets. We knew they were coming. The trailer told us so. We knew it would be something about Simon and Gordo’s past. What’s cool is that it is in no way what you would expect, and that Robyn has to play detective to kind of figure it out. Since her husband is not telling her anything, Robyn has to go find different sources from both Simon and Gordo’s past and get them to give her information. First she goes to Simon’s sister and then to an old highschool friend of his.

This all works out pretty well. The surprise does not disappoint. In fact, it really is a game changer, presenting a number of characters in a different light. What’s also nice is that the surprise doesn’t just reveal things from the past, but also from the present. That makes its ramifications suddenly a whole lot more relevant. It’s the kind of surprise that turns everything on its head. It’s basically the reason why Joel Edgerton made this movie. The rising actor took this as his first film for a directoral debut. You can see why.

As a movie that plays on other, familiar films of the past, and then adds a new twist to them, this works. It is in no way a completely different and unique film, but what does work is the way that it takes things in a new angle that we haven’t really seen before. Let’s just say the circular ending where everything returns to normal and to the way they were at the start of the film, goes right out the window with this one. The movie is pretty entertaining, mostly for its second half, where the film branches away from those other movies and takes on a life of its own. This is a good movie, with a second half that really delivers.