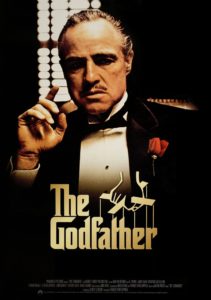 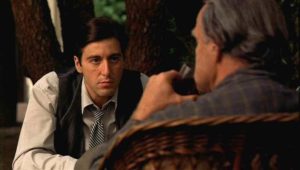 A fantastic look at the inter workings of a crime family in America, and how the changing times cause massive levels of conflict for everyone involved.

One hell of a movie, this is the original gangster film when it comes to mafia families. And it definitely deserves all of its praise and popularity. The movie is incredibly violent, just like the best movies in this genre, (from Goodfellas to Scarface,) but it also has some real heart. It’s the story of a family, with three sons and a father who tries to stand behind his values, while still dealing in organized crime. Don Corleone, as played by Marlon Brando, represents the old style in a world that is always looking to evolve. The drug business is the new way to go, and when Corleone rejects the idea of getting the family mixed up with it, all hell breaks loose. Suddenly families are at war with each other, key figures are getting assassinated, and everyone is constantly looking over their shoulder. As if all that weren’t enough, this movie tells the story of one character’s complete transformation as Michael (Al Pacino,) goes from the returning soldier who wants nothing to do with the family business to taking it on head first. Watching his journey, and seeing what would drive him that far, is pretty incredible.

The Godfather is the ultimate mafia crime story movie. This is the classic. Whereas Goodfellas might be the best of the genre, and the one that used style, camera shots, voice over, and music to perfection, The Godfather is the movie that started it all. This is the one that established what realistic violence could look like and how organized crime could be turned into a story. Before The Godfather, crime movies were in a whole different ballpark. We’re talking about movies like Bonnie and Clyde, Bullitt, The Italian Job, and The Thomas Crown Affair. These were all movies about individuals. The Godfather showed us crime as an organization.

The real roots of The Godfather have got to be in the gangster movies from the thirties and forties, starring guys like James Cagney and Edward G Robinson. Those guys were gangsters, but they still weren’t part of a family. And that’s where The Godfather sets itself apart. From the opening scene, which is not a crime, but a wedding, this movie is all about family. That wedding sequence lasts a good thirty minutes or so and introduces us to every character we need to see or know about. From Michael, (Al Pacino,) a soldier who has returned home from war with his girlfriend, Kaye, (Diane Keaton,) to Don Corleone (Marlon Brando,) who takes meetings inside his house during the wedding, everything is there, laid out for us, beautifully.

The movie opens with one of those meetings. A man comes to see The Don in his office, asking for Corleone to enact vengeance on a man who has severely beaten his daughter. The police have done nothing about this, and merely brought the man in, before letting him go again, without being charged. And so the girl’s father comes to Corleone for help. And right there, we get the sense of what Corleone is all about. He helps people in ways that are outside the law. He does what the police cannot do. And he does it so that men will owe him loyalty, respect, and the promise to one day return a favor. After this man, a guy comes to see him about preventing his daughter from following the man she loves to another country. And then an actor comes to see Corleone looking for help in getting a promising movie part.

The actor is Johnny Fontaine, and his story is based on a legend about how Frank Sinatra got a part in the movie From Here To Eternity. Fontaine’s story ends up becoming like a spinoff of the wedding that brings us into the action. But first, we get Michael’s story that he shares with Kaye, about Luca Brazi, and how he made a man an offer he couldn’t refuse. Johnny Fontaine was locked into a music contract, and Brazi brought an agreement to the producer to let Fontaine out of it. Brazi made the producer “an offer he couldn’t refuse.” He held a gun to the man’s head and told him either his signature or his brains would be on the contract. In telling this story, it helps establish the family and their way of doing business, but it also does something else. It gives Michael the opportunity to say, “that’s my family, Kaye, it’s not me.” This movie is the story of how Michael will change, and this line establishes his starting point as removed from the family business. We will watch as his story takes him deeper and deeper down the hole of what he promised he would never become.

The act ends with Tom Higgins, the consoliere to Don Corleone (the right hand man,) going to see another movie producer to get Johnny into a movie. When the producer refuses, Higgins has the head of the producer’s prize winning horse cut off and put into bed with him, while the man is still asleep. And we get to see what happens when the man wakes up the next morning. Everything about this situation is great, including the producer telling Tom the story of why he won’t give Johnny the part. And the horse head scene punctuates it all. By the end of the act, we have met the family, seen the way Don Corleone helps people, establishes Michael’s starting point, heard a story about how the Corleones use muscle to get what they want, and witnessed what happens when you cross them. The setup is done. Now it’s time to get to the main storyline.

Act two is about the real source of conflict and antagonists in the movie. The cause of it all is drugs. Certain parties, including other mafia families, want the Corleones to start entering the drug business. The Corleones are already involved with prostitution, gambling, alcohol, and contract negotiation. But drugs they won’t touch. Sonny, the oldest brother, (played by James Caan,) wants them to get in on it. He sees that there’s s lot of money to be made. But Don Corleone refuses. And the result is that a hit is put out on his life, and he is shot one day, while riding in his car. The hit is unsuccessful in killing Corleone, and so he’s brought to the hospital.

Michael goes to visit him and notices no security anywhere. This sequence is incredibly important, because Michael goes into it as a family man, there to see his father, and comes out an awoken person with a new mentality. When Michael enters the hospital, he seee that none of their men, that were supposed to be watching his father, are anywhere to be found.  Neither is anyone else for that matter. All patients and staff are gone. The place is deserted. Michael realizes right then and there that his father is about to get attacked again. And so Michael moves his father to another room and then gets a friend who has come to visit to stand out front with him and act like he’s got a gun. This drives the attackers away. (the fact that Michael didn’t realize the attackers could do  drive by on him, just like they did to his father, shows how naive he is.)

From the attempts on his father’s life, Michael puts the pieces together to realize what happened. The local police captain, who has been bought off,  had all of the Corleone men who were watching his father locked up in jail. And the man who did the attack is the same guy who went to the different families looking for them to get involved with drugs. This man believes that with the Don killed, Sonny will take over and make the deal with him. Only Michael has other ideas. And when he is punched in the face, by the police captain, it is the final straw that wakes him up and snaps him from out of one life and into another. He decides, right then and there, to change direction. He now plans to go at the man running the drugs,  Virgil “The Turk,” Sollozzo, as well as the corrupt police captain, both at the same time. This leads to the restaurant scene where Michael pulls a gun from a hiding place in the restroom and assassinates his targets. Between the hospital scene and the restaurant scene, Michael has been transformed. He has been reborn from the good son to a man of violence. These two scenes are the two most important scenes in the movie. Michael goes into the hospital as one person and comes out of the restaurant as another.

And now, for the third act of the movie, Michael goes to Italy. He has to get away from New York, after what he did. In Italy, he meets a beautiful woman, gets married, and then finds that the life has followed him here, with all of its violence. Meanwhile, back in New York, trouble has met with both of Michael’s brothers.  Fredo, the young and dopey brother, is in Vegas, working for a man named Mo Green who beats him up in public. But that’s nothing compared to Sonny, who goes to Long Island after his sister is beaten up by her husband, and meets with a surprise at the tollbooths. What’s great about this scene is how carefully the elaborate trap to get Sonny to come there, is all laid out. Carlo, the husband who beats his wife, Connie, has his mistress call Connie, looking for Carlo. And that’s just to make Connie mad, so that she will give Carlo a reason to beat her. Only she doesn’t. Not like he expects. And so he has to try something else, involving the dinner Connie made for him, at his request. This leads to him beating Connie, which leads to Sonny getting the call. And that’s what gets Sonny to come out and drive right into the tollbooth trap.

In the fourth, and final act of the movie, Michael comes back home and takes over the family business. He gets back with Kaye, in a situation that could have used a little more explaining, (maybe a scene of him telling her where he has been all of these years or something like that,) and he deals with the people who have been threatening and betraying his family. This includes some ramifications for what happened to his brother, Sonny. It includes what is currently happening in Vegas with Mo Green and Fredo. And it most certainly includes the other heads of the five families. The first act is about Michael before, the second of Michael during, and the third is about his afterwards. By the final scenes in the movie, he has taken over his father’s role. This movie is about his transformation. It’s about the journey Michael goes on (part of it being a literal journey to Italy,) and how it changes him. It’s about how he becomes The Godfather.