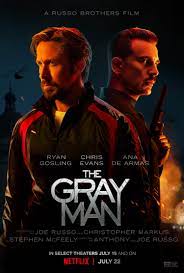 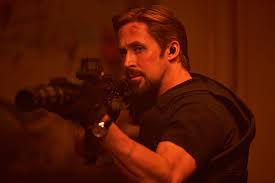 It’s Jason Bourne meets John Wick, with a ton of action, but also a very simple and cliched plot that doesn’t really go for anything we haven’t already seen before.

Here’s the Russo Brothers trying their hand at a big budget action flick that has nothing to do with Marvel. Unfortunately what it has to do with is every other spy thriller ever made. This one intentionally hits every cliche in the book as it tells the story of a rogue CIA agent who turns on his agency when he finds out they’re up to some shady business. They then spend the rest of the movie trying to kill him. If it sounds a bit like the Bourne movies, that’s because it is… without the memory loss angle. The action here is fine, but as far as the story goes, the movie is pretty weak.

The Gray Man is an okay movie. It’s an all out action film, based on an original IP, which we don ‘t really see any more. Not in theaters anyway. Which is why this one wasn’t in theaters, but instead was a Netflix original film. These days, expensive action movies that are not based on an existing property with a built in following go straight to streaming, be it Red Notice (also Netflix,) the Tomorrow War (Prime,) or anything else. And that’s in large part due to how superhero movies have taken over a solid chunk of the theatrical business. The irony of all of this is that the Gray Man was made by the team who makes those Marvel movies. Specifically the Russo Brother, Joe and Anthony Russo, as well as their frequent collaborators and writers Marcus and McFeely. They all got together to make this movie with their longtime star Chris Evans (this exact foursome of writers and directors made the last two Captain America movies and the last two Avengers movies.) And all of those movies were fantastic. All four of them. So there’s no doubt these guys have talent, but the question then is what does their work look like when they step away from Marvel?

Based on The Gray Man, the answer is not all that great. To be fair, the four Marvel movies these guys made are some of the best Marvel movies there ever were. Throw in Iron Man (the first Marvel film,) The Avengers, and Guardians of the Galaxy and your looking at the seven best Marvel movies in no particular order (Thor: Ragnorak, you would get the number eight slot.) But you would think if these guys went four for four with Marvel movies, surely they would be just as good with other big budget action movies, right? Wrong. The Gray Man is not on the level of Marvel movies in any way. It’s not that it’s bad, it’s just that it’s not very smart. And it doesn’t try to be either. This is clearly meant to be a nineties style movie of two guys facing off against each other, chasing each other, and in pursuit of a very simple object. In this case it’s a flash drive with some secret information on it. Very simple. Very cliched.

Consider the movie right there in the vein of the Bourne Identity meets John Wick. Only imagine that both of those movies were stripped down to their most basic parts. So with Bourne, for example, forget about the amnesia storyline. Just think about how the CIA is chasing down this guy who is out there on his own, and is insanely talented at combat and survival. And with John Wick, forget about the whole Continental world of assassins storyline. Just focus on the killing of the dog for the simple motivation that the movie is running on. The Gray Man exists somewhere in there. In that GRAY area.

At the start of the movie, we see Ryan Gosling’s character, Sierra Six, get recruited by CIA operative Ftizroy, while Six is in prison. Fizroy says that Six will be able to walk out with him right then and there if he agrees to come work for him. And so Six agrees. The next thing you know, it’s some years later and Six is on a mission in Bangkok to assassinate a target at a club. When he asks who the target is he is told it’s a “very bad man with some very bad sh*t.” That’s about the level of dialogue in this movie. It’s obvi, obviously corny on purpose, to be funny, but that doesn’t really make it all the better. Six hunts down his target in the club, which include trying to shoot him under the floor, looking up the target’s feet, and then chasing the target out a window amidst a grand display of fireworks. It makes for a great action scene with barrels of flames bursting all around them while they fight, but what happens next is the essential plot point of the movie, and it doesn’t exactly work.

The target who Six kills claims to be a CIA assassin just like him. And this man tells him that he has something which incriminates the head of the CIA, and which he wants Six to have. Ans Six takes it. Why? Obviously the people in the CIA are dangerous, shady people. It’s a don’t ask questions kind of job. And Six taking this flash drive, which is hidden in a gold necklace, makes him automatically the new target. But he is luckily given a chance to get out of it. The head CIA operative asks him if the deceased target gave Six anything before he died. He asks if Six has anything to turn over. And Six doesn’t answer the question. Instead, he just asks his own questions about the target. Talk about stupid.

It’s the CIA assassin vs CIA assassin fight in Bangkok that is most reminiscent of Bourne. Especially when Bourne faces Clive Owen in the first movie, “look what they make you give up.” But here, that first CIA assassin was just the beginning. Pretty soon, the CIA is calling in Lloyd Hansen (Chris Evans,) a rogue assassin who does not actually work for the CIA, but instead is a gun for hire, working in the private sector. Hansen makes it clear throughout the movie that he doesn’t play by the rules and has nothing restricting him from doing whatever he pleases. This includes kidnapping the family members of former CIA agents in order to get them to do what he wants. And now, for the rest of the movie, we get Lloyd chasing Six.

The movie gets a little John Wicky when Hansen puts out a reward and suddenly everyone is looking for Six. When Six goes to see a contact who can make him fake passports, it turns out to be a trap. Everyone wants that reward money, and so it’s Six against the world. Except for his one helper,  Miranda, who helps him get out of more than one Deux Ex Machinas, no-win situation. And the vast majority of this movie is a very simple action movie with one large set piece after another. It may have started like Bourne or Wick, but after this thing gets going, it keeps trying to go bigger and bigger and ends up being more like a Fast and the Furious film (ironically Gosling was in the great movie Drive, which was marketed as a Fast and the Furious style movie, even though it wasn’t one.) This movie also feels like a Schwartznegger film at times, like during a plane scene where Six literally gets sucked out of the side of. Plane through a window and then fights bad guys while falling through the sky, trying to grab a parachute (Arnold literally did something like this in the movie, Eraser.) Clive Owen even parodied this sort of thing with the movie Shoot ‘Em Up, which also featured a plane and sky diving action sequence. And then of course there’s the most recent Mission Impossible movie which features a plane jump of it’s own.

The action here is over the top. It’s a lot. But luckily it never fully reaches Fast and the Furious territory, where we just stop caring (although during the train sequence, with Six on top of the train as both it an cars and trucks crash into everything around them, including lots of buildings, it comes pretty close.) But this one is never as off the chars ridiculous as those movies, (the last one took its characters into space in a car, which was about as believable as the Machete sequel, Machete in Space, which was never actually made.) The Gray Man isn’t completely ridiculous in terms of its action, it’s just way too simple in terms of its story. Characters are two-dimensional here and don’t have any emotional depth. And again, it’s not like they are trying to either.

The female characters in the movie aren’t given a whole lot more depth here than the males, but they are right there, backing them men up. There’s Anna De Armis as a spy working with and helping out Six. She was so good in her very brief role as a spy in the most recent Bond film, so they decided to punch up her role and gave her more screen time doing pretty much the exact same thing in this movie. It’s not as impactful as it was in the Bond film. And then there’s Jessica Henwick (from the Iron Fist Netflix series as well as Game of Thrones,) as the sort of assistant to Carmichael, the man who hired Hansen. She’s the person who is sort of put in charge of watching over Hansen and reining him back in. Although she does a pretty awful job of that. All of these characters are very two dimensional and flat.

The Gray Man is a movie that knows what it is, and knows what it wants to be. Normally that’s a good thing, but in this case they set the bar way too low. Not wanting to be too intelligent, and just a guilty pleasure action movie is one thing. Not showing us anything new,  that we haven’t seen in other, better movies is another.  As just an action movie, this one is fine. The action looks good. The days of real martial artists like Jackie Chan, Jet Li, and even Tony Jaa are fine (Jaa got to play a side character villain in one of the Fast movies and they barely used him.) So when it comes to action, the John Wick movies are the best we’re gonna get these days, and then something like this is the next best. The Wick movies are B movies that manage to throw some intelligence and world building into them. The Gray Man is not. It’s a bare bones action thriller, and I use the word thriller lightly. It’s not a bad movie, but it definitely feels like a movie that doesn’t have anything new to offer.