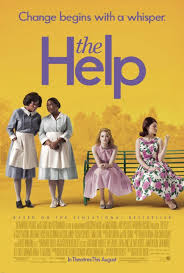 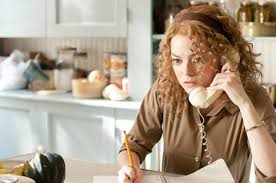 a fun and clever movie about the life of black women maids in the south and the racism they are forced to deal with on a daily basis.

The help is a funny and compelling movie. I never thought I was going to like this film, with it’s all female cast and politically correct look. I had no interest in seeing it in theaters. But then the Oscars came around and nominated the hell out of the film, with everything from both best actress categories to best picture of the year. it almost won in both of the actress categories too. Between the nominations, the clips they showed, and the word of mouth, I started to rethink my position on this movie, and boy is I glad I did.

The movie certainly would have benefitted from having any recognizable male in it, even in a small role. The guy that Emma Stone dated, for example, could have been played by someone like James Franco, and was really a two or three scene role. At least then there would be some drawing power for men to be interested in the movie. I mean, even Bridesmaids had John Hamm. but instead, this movie prides itself on a fully loaded female cast featuring the likes of Emma stone, viola Davis, Jessica Chastain, Bryce Dallas Howard, Allison Janney, and sissy Spacek. between that cast and its purple and yellow colors, they couldn’t have tried to appeal to men any less.

and yet the movie is still pretty great. once you give it a chance, it’s almost impossible not to realize that. the story here is about a town in Mississippi during the 1960s, where black women are working as maids. it is the height of the civil rights movement around the country with guys like Martin Luther King Jr., Malcolm X, and Medgar Evers preaching for equality.

the women who work as maids tend to the every need of their host family. but mainly they take care of the children. they raise the babies as if they were their own, and basically act as the babies’ mothers. the real mothers, meanwhile, a bunch of snobby, well-off, white women, can barely be bothered to spend any time with their own children.

all of this sounds like it’s a very kind black women against mean white women sort of movie. and it would be too, if not for the main character of the film, being a white woman herself. That’s Skeeter, played by Emma stone. at the start of the film she is returning home from four years of college up north. she has spent the last four years around black people and supporting their rights to equality. and now she comes home to see all of her old friends have become the mean, thoughtless bitches that their mothers were before them.

that’s one of the key points of the film… that the black women raise the children and then the children grow up to become exactly like their mothers and treat the black women who raised them, like dirt. it’s the story that Skeeter wants to tell, and so she begins writing an article for a magazine. the article is going to be the real life accounts of the women who work as the help in these white family homes.

As Skeeter is writing her article, talking to one of the maids, Abilene (viola Davis), there is another character that we are also following. That character is Minnie, played by Octavia Spencer. she is a wonderful character. Spencer won the best supporting Oscar for this role and boy was it well deserved. granted we don’t know the actress (she is pretty much a newcomer here,) and so we don’t know how much she was acting and how much this role was really like the way she is in real life, but boy did her character pump life into the film. mini was by far the most funny, most exciting, hot tempered, and energetic character in the movie. The other one was Jessica Chastain, as the woman who mini goes to work for, and she was also nominated for an Oscar in the same category as Spencer.

the first half of the movie is about how these three women came together to write down their stories. Skeeter was returning home and seeing what was happening to the maids in her friends’ homes. aibileen was helping Skeeter with cooking articles, until these articles started to become about something else. and mini was dealing with a horrible boss who fired her for using the house toilet instead of going outside during a rainstorm.

the second half of the movie is about skeeter dating and more importantly about the book. the article is turned into a book and becomes a best seller, and then there is the issue in the town of whether or not the book is about them. Skeeter, of course, did not use her real name as the author of the book, nor did she use any real names of people in the town, including the maids. but the stories are right there on the page and anyone who lived through them can tell by the details, exactly who the stories are about.

the movie works because it has a great story, but also because it has a lot of humor. there is, of course, the horrid pie situation, which is played for all that it is worth and handled brilliantly. we don’t even find out what was in the pie until about halfway through the film, but the movie sure keeps us curious until then. aside from that, there are other secrets that are kept from us until just the right moment, such as what happened to Skeeter’s former maid, constantine. That was the woman who raised her, and when Skeeter returns home from college, Constantine is no longer there. the movie handles these mysteries with great delicacy, letting us know about them without supplying answers until it is good and ready. and while we wait, our curiosity grows. it is a very well-written movie and a lot of fun.