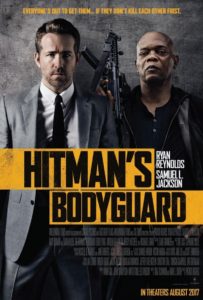 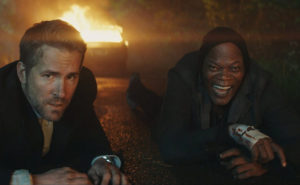 The action is pretty good, and the story keeps you watching, but the movie is instantly forgettable with nothing memorable about it at all.

A movie that was clearly made based on a title and longline, this film has an incredibly thin plot and it shows. A hitman is going to testify against a war criminal, and he just has to get from the jail to the courthouse. The only problem is, the war criminal has a ton of men who are trying to kill the hitman along the way. So the hitman teams up with a bodyguard and away they go. The mission couldn’t be more simple. Get from point A to a point B. We basically got the same film a few years ago with the movie Safe House, (which also starred Ryan Reynolds, that time alongside Denzel Washington.) The action here is enjoyable, but it certainly isn’t memorable. There are no stunts that stand out at all, and instead, we really just get a series of gunfights, car chases, and explosions. Even Gary Oldman, playing the villain, is giving the worst villain performance of his career, (and he’s had quite a lot.) It’s not that it’s a bad movie, but just that it’s in no way special or creative. Instead, this is really just packed full of usual cliches.

The Hitman’s Bodyguard is an easily forgettable movie. It’s a fine B movie, entertainment piece, but there’s nothing about this movie that is special at all. The thing that makes it enjoyable is the action, which is full of over the top gunfights and explosions. They certainly went all out for this one. But not enough to come up with any clever stunts, Mission Impossible style. Instead, this movie is more like Safe House, another Ryan Reynolds teamup movie that is barely memorable. That movie featured Reynolds and Denzel Washington, with Washington playing a bad guy who was coming in, and Reynolds being the agent who had to protect him. This movie basically follows the same plot.

In The Hitman’s Bodyguard, Reynolds plays Michael Bryce, a private bodyguard, hired to protect top notch clients. When he loses a Japanese arms dealer at the start of the film, while the man is under his protection, everything goes south for him. That’s what we’re supposed to believe anyway, although the next time we see him, it’s two years later and he’s protecting another high profile client. The difference is that this client is a drug addict businessman, but that’s about it. So, already the movie has dropped the ball with trying to show that things have gone south for Bryce, while really not conveying that idea at all.

But then there’s the story of the hitman, Kincaid, (played by Samuel L. Jackson.) He’s the prosecutions top witness against a dictator named Dukhovich, (Gary Oldman,) who is being charged with crimes against humanity. The only problem is that Kincaid has to get to a certain courthouse to testify, and Dukhovich has had his men kill any witnesses that have popped up, who plan to testify against him. So, this is simply about getting Kincaid from point A to point B. And along the way, you better believe he and Bryce are going to get jumped and attacked a ton of times by Dukhovich’s men.

There’s a female agent who is assigned to protect Kincaid. Amelia Roussel, is the reason why Bryce and Kincaid end up together to begin with. She and a group of heavily armed agents are transporting Kincaid when their convoy is attacked. Of course, she and Kincaid are the only ones to survive. And of course, she calls in her ex-boyfriend, Bryce and then leaves Bryce and Kincaid to get to the courthouse. That’s the part that really makes no sense… wouldn’t she still go with them? The only reason she doesn’t is because this movie wants to fit the buddy comedy mold, and that means losing the girl and making what would have been three characters traveling together into the usual two.

It’s a real shame, because making this movie about three characters on the road together might have been the very thing the movie needed to give it some kind of special edge. Imagine scenes of some guy coming over and hitting on Roussel and both Bryce and Kincaid standing up to this guy, only to realize that they are both competing against each other, trying to look cooler in front of the girl. But this movie isn’t interested in anything other than the usual format, which means no girl on the road, and just the two guys, traveling together, just like every other movie.

The one thing that does work for this plot, and separate it a little from all those other, similar movies out there, is the story about what happened to the Japanese businessman at the start of the film. Bryce has always blamed Roussel for it, since she was the only he told about the assignment. It’s the reason why the two of them broke up. And this movie doesn’t just forget about that opening, but instead, makes it a constant thorn in the characters’ sides, until we get new answers and revelations.

Other than that, however, this one is pretty much pain by the numbers. There’s a corrupt cop giving Dukhovich information, just like in every other movie. And this film doesn’t even attempt to hide or disguise it from us, to give us a surprise reveal later on. I guess that’s a good thing, since most movies do save this for the twist, and at least The Hitman’s Bodyguard seems to be above that. Either that or it’s too lazy, but anything that’s even a little different from the usual film is very welcome here, in a movie this rattled with cliches.

Even getting Gary Oldman to play the villain doesn’t work here, like it should. That’s because Oldman has played so many better villains throughout his career, that here he just looks old and tired. Remember him in The Professional, playing a pill popping psychopath? What about in True Romance as the pimp? He even did this Russian / Eastern European accent before while playing a villain in Air Force One. Here, he’s quiet and cold, (the exact opposite of what he’s done in those other movies,) and instead of feeling like something new, since Oldman has always played it loud in the past, here, he just looks exhausted. Like giving it your all is a young man’s game, and he no longer has the energy for it.

Early on in the movie, when the convoy is attacked and Roussel and Kincaid have to hide out for safety, she takes him to a safe house. That really is the same story as the Reynolds=Denzel Washington movie with the same title. The only difference is that Safe House doesn’t involve a girl who brings the characters together. Otherwise, this movie is basically the same thing. It should have strived to be something more. Sure, it wouldn’t be able to compete with some of the great spy genre films that spawned sequels and became franchises, (Bond, Bourne, Mission Impossible, and now even Kingsmen,) but at least do something like Salt did, which is give us something to think about.

The thing about this movie is, it seems to have been made based on a title and a longline. The title The Hitman’s Bodyguard is a good one, (but then again, so was Cowboys and Aliens and Snakes on a Plane,) and it leads to some spoofing in the trailer and promotional poster, of the Kevin Costner – Witney Houston movie, the Bodyguard, but you need more. And this movie just doesn’t have it. There’s very little attempt to be original or creative here. Instead, this movie seems content to rely on its all star cast and longline, and just throw them together and hope that something great comes out of it. Needless to say, it doesn’t work. Without strong writing, what we get is a series of fun, but pretty standard action scenes, and nothing to walk away remembering.