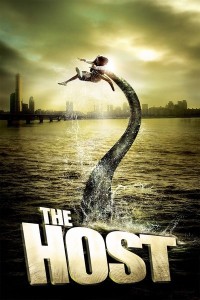 It’s the Cloverfield of the sea, with a little more at stake once a teenage girl is captured by the creature and kept prisoner in it’s den.

The Host is a Korean monster movie that was a sensation when it came out. I’m not entirely positive that i understand why. it’s a monster movie and monster movies are certainly fun. especially if they’re handled with style and artistry and this one certainly is. it’s a good movie with an interesting approach, but i’m not sure that’s it’s as revolutionary as the tremendous success it was met with would make it seem.

in this film, the monster appears fairly early on. the characters that make up a korean family are watching tv from their food stand at the side of a river. there are tons of people out by the banks of the river, either fishing or picnicking. and they notice something strange hanging down under a bridge. it looks like it might be construction equipment. whatever it is starts moving and slides down into the water.

soon the monster appears running around on the land. i like that we never see it pop out of the water and that things seem calm and then the next thing you know, there it is running up behind everyone. the monster ends up taking a little go in the family with it, dragging her around with it’s tail. the girl is the daughter of one of the cooks from the stand.

and now we really meet the family who runs the stand as they all show up to a gathering of people who have lost loved ones to the monster. there’s a photo of the girl and candles and we meet not only her father and grandfather, but also her uncle and aunt. the uncle is a drunk and the aunt is a bow and arrow champion. these things will both come in handy later on.

Already this movie has more going for it than the average monster movie, giving us a family and making each character distinctly different. the father is the one in the most pain, mostly because as they were running from the monster, he grabbed the wrong girl’s hand. he thought he was grabbing his daughter’s hand and looked down to see that it was another little girl. when he looked up again he saw that the monster was carrying off his daughter. and now he lives with that guilt.

All of this is very interesting and unique to the genre and in addition to everything else, we find out about a quarter into the movie that the little girl is still alive and being kept in the monster’s den. it’s a sort of sewer tunnel where the beast keeps dropping off dead bodies to come back for and eat up later. the girl finds a phone and calls her father, but soon the phone has gone dead and her father is left only with knowing that his daughter is still alive somewhere.

At this point everything is going well for the movie and things are moving along nicely. all of that changes right about here. suddenly the government starts getting involved, claiming that there is a virus that the beast is spreading and wanting to quarantine anyone who was bitten or touched by the monster’s blood. the attempts at catching the beast start to slow down.

there are no new plot twists or surprises in the second half of the film and that’s another reason why it starts to feel so slow. also, the running time of the movie is longer than it needs to be. the members of the family seem to go their separate ways, and while they haven’t exactly given up on catching the creature, the hunt is no longer the movie’s top priority.

the movie does manage to pull itself back together for the ending and have a pretty clever climax, but by this point it has already lost a significant amount of momentum. that’s the kind of thing that is very hard to get back, and the movie never really recovers from it’s slow second half. the monster still appears in that part of the film, here and there, but there is nothing new that we are seeing about him that we haven’t already seen before.

the idea of approaching a monster movie from a family perspective is pretty great. the main characters aren’t soldiers or trained operatives but fathers and grandfathers. in other words, they are real people. and having the little girl captured by the beast and still alive is another cool angle. the movie would have benefitted from cutting about twenty minutes or so from it’s running time. it really does lose momentum in it’s second half and start to drag on, but other than that it had a lot of great things going for it.