The House on Haunted Hill ** 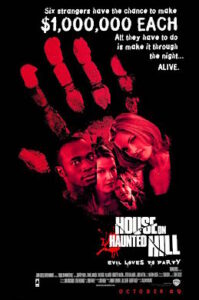 A fine premise is handled in all the wrong ways in this attempt at a one night in a house horror movie that goes terribly wrong.

Here is a movie with the perfect start and setup, that just doesn’t have a clue what to do with it. A group of strangers is invited to a mansion for a night of murder and mayhem. And it is established that the man hosting the event loves pranks and scaring people half to death. But guess what? He’s got nothing planned. The characters literally arrive and then the house starts coming to life and attacking, first by locking them in with walls that fall down all around the sides. When the villain of your movie is a black cloud, you know you have problems. There are some redeemable features here and there, but for the most part, this one is pretty lost.

The House on Haunted Hill should have been a decent movie. The premise and setup were there and all the pieces were in place to at least really get this thing off on the right track. And yet the movie managed to flounder any momentum it had going from its very first ideas in every way possible. The premise that definitely had potential here is that four strangers are invited to a mysterious dinner party in a mansion, and if they survive the night, they will win one million dollars each. That works. It’s got ties to any of those great murder mystery movies where a bunch of strangers arrive at a mansion and have no idea who invited them or what’s in store for them. From And Then There Were None to Clue, there have been some pretty great movies made with this idea. And everything leading up to the idea is pretty good. But once the characters arrive in the mansion this thing instantly starts falling apart.

To back track a little, we begin the movie with a news report about this old mansion and how it used to be the site of a mental hospital where illegal tests were being done on the patients. Those patients ended up setting fire to the place and killing most of the staff. Following the report, we go on to meet Stephen Price (Geoffrey Rush,) and his wife, Evelyn (Famke Jansen.) Price is an amusement park tycoon. He designs the rides and thrills his customers. At that start of this movie, he’s opening up a new rollercoaster and doing an interview about it for the news. He takes the reporter and camera man up in an elevator, and the elevator drops. It seems to be hurtling for a crash landing with the ground, until the elevator catches itself and we learn it was all just a fake out. And then there’s the rollercoaster intself, which includes a moment where the track comes apart, right before the rollercoaster goes over it. Turns out this is a trick too, meant to scare the riders who see the track is out, up ahead of them. But again, this is a fake out, and the track fixes itself before the rollercoaster actually goes over it.

These opening scenes are important because they establish what kind of guy Stephen Price (the last name is clearly an homage to Vincent Price, star of the original House on Haunted Hill movie,) is. They set him up to seem like an absolute prankster, who gets his thrills some scaring people half to death. So you expect him to have some tricks up his sleeve with the characters in the mansion, right? Well, he doesn’t. But will get to that shortly. First there’s the idea that Evelyn calls her husband up and demands he throw a birthday party for her in the mansion. Now, it’s not like the two of them have a good relationship, and like there’s any reason why he would try to please her. These two hate each other. When Evelyn gives Price a list of friends to invite, he has the list shredded and makes his own list. But that still begs the question, why throw the party in the first place for someone you hate?

Regarding the list of invitees, after Price puts it through the shredder, he does type his own list. But then we watch as the computer deletes his list, and now it also types up its own list. This is getting a little silly. The movie wants to make the case that the house is filled with demonic energy and can even control electronics and messages on the internet. There’s a whole conversation about it later on, where all of these ridiculous theories are explained. But either way, we do get a bunch of strangers who neither one of our leads invited, and they all show up in limos, one after another. The sequence where they show up is the best one in the movie, and it is one hundred percent because of the song. Sweet Dreams, the Marylin Manson version (a scary take on the classic Eurythmics song.) This song perfectly sets up the tone and mood, as we move from the office where the list is being printed out to the limos themselves, with each character sitting alone in the back of the car, looking over the invitation, and looking up at the house on the hill, as they arrive.

So now we have a solid character introduction of Price, a nice sequence of the guests arriving in their limos, and finally a proposal that if they survive the night, they will get this money. Three great components. Things are all set to really take off. And instead, they go the exact opposite route. Price welcomes them inside the mansion, tells them the terms, and then things instantly start falling apart. The owner of the home is Pritchett (Chris Kattan,) and he was told that all he had to do was lead the guests into the house from the driveway at the bottom of the hill. Once there, he was informed that he could collect his check and leave. Only it takes forever for him to get that check from Price, and by the time he does, there’s no more leaving possible.

The movie starts falling apart from the moment the characters get into the house because nothing seems to be prepared for them. That means neither traps nor activities. In Clue, for example, the characters began by having drinks in the billiards room, then moved onto dinner, and finally to the study, where they were told the rules about what was going on that evening. Here, there is nothing planned for these characters to do at all. No dinner. No sitting down. No drinks even. So much for the dinner party. That’a the first problem. The second one is that Price apparently does not have anything planned (in terms of tricks and traps,) either. Isn’t the whole point of showing that opening roller coaster sequence to let us know that this guy loves scaring people and rigging places with fake effects? Here, every single thing that happens is not in his control, starting with the stained glass ceiling that falls on them, nearly killing one or two, right after Pritchett gets done explaining what the picture means and where it is from.

After that, it’s the building going on lockdown, with security walls falling all around them and no way to escape. And again, this is not Price doing it. So what exactly is he doing? What did he have planned for scaring these people into leaving and not collecting his money as a prize? But wait – Price has an employee sitting in a secret room in the house, watching all of the guests on monitors. Surely this guy must be the one pressing buttons and setting off the trips, noises, and whatever else, right? Wrong. This character (played by Max Perlich,) exists only to watch the monitors. It doesn’t matter that we saw him working at the amusement park at the beginning and so we know he is in on the manipulation and pranks. Neither he nor Price have anything to contribute here, as far as the scares.

And that leads us to what the scares are. They’re not really traps, but instead more like ghosts and spirits that live in the house. And that could still be okay, (like it was in the movie 13 Ghosts,) only here, the sprits come and go mostly as a black cloud filled with images of people and creatures inside of it, moving through the house. It’s not very scary. As a general rule, movies that use a cloud as the villain tend to be the subject of ridicule, be it Fantastic Four 2: Rise of the Silver Surfer with the representation of Galactus, The Green Lantern’s villain, played by Peter Sarsgard, or even the wind moving through the trees in The Happening. It’s just not scary or menacing enough.

After the house is locked down, the characters go and check the basement looking for the control room to reverse the locking. And some of them don’t come back. When Evelyn is found strapped to a bed getting electroshock treatment, everyone assumes it was Price who did this to his wife. And so they lock him up. And then the double crosses start. happening. Characters try to murder each other. In two cases, characters are left for dead, while really alive, and come back to get revenge. Not everyone is who they were pretending to be. Secrets come out and the black cloud chases everyone around. That’s about it.

There are definitely some things to like about this movie, from the opening rollercoaster sequence to the arrival scene with that song, to the way that the characters need to escape the house by making it up to the attic at the end. But there’s just so much that goes wrong in between. We don’t even get a sense of what the mansion is like and what some of the different rooms are. We never even see the kitchen. Even a movie like Ready of Not, which was not about a bunch of strangers invited to a dinner party, managed to show us that. It should be a rule of the genre, if you’re going to make a mansion movie, you have to show the different rooms. This movie spends more time in the basement than it does anywhere else in the house. What a waste of an entire mansion. There are just too many mistakes and missed opportunities with this one.