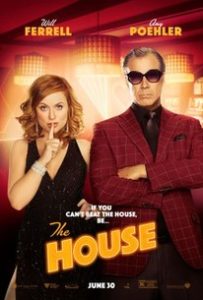 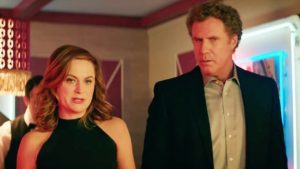 A surprisingly funny movie, built on a very simple premise.

A movie that is much better than it looks, this one actually is funny and enjoyable to watch. It’s a movie with a very simple premise that makes no excuse about it. A couple needs money fast and so they, (along with their disheveled friend,) decide to open up a casino in their house. And for the first half of the film, that’s really as far as the plot goes. And we’re okay with that, because its funny. But then in the second half, when the plot really does start to unfold into all kinds of interesting directions, we are pleasantly surprised. The movie gets us to be okay with the fact that it just has a basic idea, and then when it turns out to have a lot more going on, its kind of like bonus. This is not a great or hilarious film, but it’s definitely the best thing Will Ferrell has made in a while, and its a step back in the right direction.

The House is the movie that proves you don’t need to have the greatest premise or story to actually end up being a fun film. What we have here is a very simple storyline about a couple that needs to get rich quickly, and decides to open up a Casino inside of their friend’s house. And with just that, this thing actually works. Granted there are plenty of movies that are built on simple, one-line premises, but this one kind of takes the cake. It’s not just one line, it’s one idea. No elaboration. And yet, because of the comedic talents involved, the hard R rating, and the “just go for it,” attitude, this movie does indeed pull it off.

Now, let’s be real for a moment. This is not a great film. This is nothing close to the better Will Ferrell movies. After all, he’s an actor that has been in more creative Stranger Than Fiction, Ferrell has taken on some great projects and done wonders with them. But those movies actually had unusual premises. You could tell that they were going to be something special going in. The House, on the other hand, looked pretty awful. That was definitely due in part to a terrible trailer that focussed more on how the Will Ferrell character, Scott Johansen, was terrible with numbers and counting, than it did on anything else. Why show the same joke again and again in the trailer? Especially if its not a very funny one? The trailer for this movie made me most definitely not want to see it. But luckily it turned out to be a much better film than was being advertised.

This movie is about two parents who have to send their daughter off to college and are met with a rude awakening. The town, which has promised the daughter, Alex, a scholarship, has decided to just bypass that promise. Instead, they have decided to use the money to build a town pool. It doesn’t matter that there are all sorts of moral questions with what they are doing, or that a girl’s hopes and aspirations are being crushed due to some major selfishness, the people of the town want what they want, and they’re willing to turn their backs on the scholarship in order to get it.

And none of this is shown in the trailer. Not the board members who make the decision, (Nick Kroll and Alison Tillman,) nor the real reason why the parents find themselves in a rut. Instead, the trailer makes it seem like the whole thing is due to an oversight by the parents where they thought they had more money in the bank than they actually do, (again, the joke about Scott having no concept of money or numbers.) But enough about the trailer. Let’s talk about why this movie actually works.

For one thing, it works because it isn’t just about this couple. Granted, Will Ferrell and Amy Poeheler, (who plays his wife, Kate Johansen,) are remarkable comedic talents, but two funny people together is usually not enough. And this movie knows that. It isn’t just about the two of them, but also about their friend, Frank, (Jason Mantzoukas,) who is a complete mess ever since his wife, Raina (Mikhaila Watkins,) left. He shows up to the graduation party for Alex and is a mess, walking around looking disheveled while eating grub off the tables. As Kate says, “he looks like Animal from the Muppets.)

When the money problems hit and it looks like Alex might not get to go to the college she worked so hard to get into, her parents still doesn’t have any ideas. Then they take a trip to Vegas to help Frank get out of a funk. and things start to come together. There’s a funny scene at a Craps table, with Frank blowing it for everyone, and the next thing you know, they are talking about making a casino of their own. The casino will operates within the neighborhood. The people who come to it are locals of the town. And while that raises the realism question of whether they would really do this if it meant ripping off their neighbors, it also creates a small town filled with small quirky characters feel. We get to know lots of different people in the community and this works for comedic purposes in all sorts of ways.

For a while, the movie goes strong with the casino idea, bringing more and more little gimmicks in. Some of them work, (the stand up coming they hire to perform,) and some of them don’t, (the bloody and brutal fighting scenes, which might have been better if they didn’t slow down the music and action to make it seem especially dark and painful.) But for the most part, the movie is on a roll, and the only thing happening in terms of plot, is that the casino owners are making lots of money.

But then something happens. With a comedy, this moment is often a bad thing, like they were able to fool us for a while, but once the plot needed to kick in we realized that there really wasn’t much going on. But with the House, things are actually different. This time, because the plot was so thin to begin with, whatever new ideas they now add only help to beef it up. First, that means a guy comes in a tries cheating, and the three owners take him in a backroom and try to scare him. They accidentally end up cutting off his finger. We see all of this in the trailer, but what we don’t realize while watching it is that this will turn out to be a major plot point and turning point of the film. Scott suddenly gets a reputation of being a badass with everyone being terribly afraid of him.

He and Kate now start to walk, talk, and dress differently. They take on the look and persona of mob figures. And in the hands of Ferrell, who doesn’t ham it up and overdo it this time, (like he did for his character Gator, in the Other Guys,) this works. But the guy whose finger they cut off comes back, and as it happens, he is part of a real mob crew. This crew, run by Jeremy Renner, is out to put the casino down. They don’t like anyone else taking money on their turf. And all of this would seem like the ending and the climax, where the danger level is at its highest. But its not. The movie has more up its sleeve. In fact, the mob figures who come in and start trouble are not even the real antagonists of the film, There’s a whole other act that follows this, involving the people of the town.

The House works because it doesn’t try to be anything that its not. This doesn’t try to be the smartest movie on the shelf, or to have a witty twist ending, or anything like that. This movie knows it has a simple premise, and is totally okay with that. In fact, it relishes in that during the first half, convincing us that its not going to take things much further and getting us to accept this. And then when it does go in different places in the second half… (first the Butcher story, then the mob figures story, and finally the town story,) we get a nice surprise. Nothing is hilarious in the movie, but it doesn’t feel like anything really needs to be. For Ferrell, it still happens to be his funniest movie in years, (sorry Daddy’s Home, Get Hard, and Anchorman 2.) Maybe that’s because this is the first movie in a while that doesn’t try to gimmicky and doesn’t force the jokes. That kind of go with the flow attitude really works.