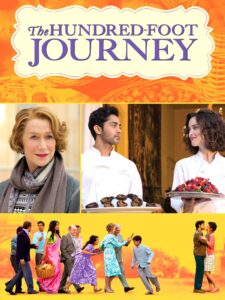 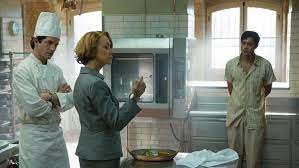 A cute, light-hearted comedy about cooking, family, and romance.

This is a fun movie about two restaurants in competition with each other and the family that is determined to make a name for themselves despite being in a strange new land where their culture is not necessarily wanted or accepted. The movie is filled with humor as the father of the Indian family decides that he is set on opening a restaurant in one specific spot in France, where their van broke down, despite it being right across the street from a Michelin Star rated, super popular French restaurant. And so the hijinks begin. But this movie is smart enough to know that a war of sabotaging the competition plot can only be carried so far, and so by about the half way point it changes gears, which turns out to be a pretty smart move. We get invested in the characters and the story, and everything seems to be moving in the right direction until the story overstays it’s welcome. Other than a final act that seems to go on and on for way too long, this movie is generally pretty good.

The Hundred Foot Journey is a nice, funny movie that belongs in a category alongside other cooking movies like Big Night, Burnt, Chef, and No Reservations. That’s because this movie is about the restaurant business and specifically the chefs inside of the restaurant, as much as any of those other films. And there’s a reason why this topic comes up again and again for movie exploration. Because it’s interesting. Restaurants are one of the few places where we all go from time to time, and yet we rarely think about what is going on behind the scenes, in the kitchens. As these movies will have you believe, it is apparently quite often a whole lot of drama.

But this movie isn’t just about the kitchen-chef-restaurant experience. It’s also about a family caught in a fish out of water situation, and the competition that develops between them and their new neighbors. The movie begins with the voice over of Hassan, an Indian man who is the chef of the family. He explains to us how his family had their own restaurant in India that was attacked during a riot that took place after an election. The attack was so bad, that his mother was killed. The family soon left India after that, and moved to London. Only their new location in London was right near the airport to the point where the planes flying overhead caused many problems.

That led the family to come to France. This is where our story primarily takes place. Abbu is the father of the family, and he really is the star of the show here. This character is tough and angry in a way that makes for great comedy. He is out of touch with his surroundings and doesn’t seem to care, no matter how much it embarrasses his children. And it is while the family is driving a van through France that their vehicle breaks down and drives off road, causing them to get in a car accident. A friendly young local woman, named Marguerite, comes by and offers to help. She takes the family in and cooks for them. Finally a bit of good fortune on their side. And this leads to the father walking around the town and exploring a bit.

When he finds a Michelin star rated restaurant seemingly out in the middle of nowhere, with no competition, he also notices that the building across the street from that restaurant is abandoned. He stops in and looks around, only to be confronted by a woman who comes in after him and tells him that he is trespassing. This is Madame Mallory,  (Hellen Mirren,) the owner of that famous restaurant across the street (where the movie gets its title from.) Abbu asks if she is the owner of the property, and when she says no, he tells her that means she is trespassing as well. This is symbolic of the relationship they will have throughout most of the movie, which is to say that whatever Abbu has to take and endure, he can give it back, just as hard.

Abbu’s children try to convince him that he’s crazy to want to open a restaurant right across the street from one of the best restaurants in all of France. Why not choose another location? They ask him. But Abbu is insistent that their van broke down in this spot for a reason and that the reason must be fate. This must be where they are supposed to stay. And so he gets in touch with the owner of the property and makes a purchase. When he is questioned about whether he has enough money to buy the property, because he was overheard bargaining about a price earlier on, Abbu explains that wanting a good deal is not the same as being poor. It just means being a good businessman and not wanting to get ripped off.

Once the restaurant has been purchased, the fun begins. It starts out small, and slowly builds to an all out war between Abbu and Madame Mallory as their two restaurants go head to head with competition. The first act is simply a complaint about the volume of Abbu’s music as he and his family setup and decorate the inside of their new restaurant. Only instead of coming over and asking Abbu to turn the music down herself, Madame Mallory makes an official complaint to the man who handles these matters for the town. Abbu’s response is perfect… “tell her I will turn the music down, but I will turn the heat up!”

From there, things get a whole lot worse. Madame Mallory comes to visit the restaurant one day, and one of Abbu’s sons lets her take a menu. He thinks he is being nice, but of course Madame Mallory uses it against him. She goes to the local market and buys all of the ingredients that the family would need to make their dishes. They then retaliate another day and do the same thing to her. Meanwhile, Hassan learns that the woman who took his family in, Marguerite, works in the kitchen of Madame Mallory, as the su chef. This is especially troubling since he has romantic feelings for Marguerite, and now learns that she works for the enemy.

Things take a somewhat unusual path about halfway into the movie. Instead of continuing with the storyline of the two restaurants competing with each other, the focus shifts to become about Hasan the chef. It gets very strange when he goes over to Madame Mallory’s restaurant and wants her to taste his food. Hasan is actually looking for a job working for her. He believes it will be better for his career as a chef, and also give him better pay, to come work for her, and since both restaurants are now doing well, he does not believe that leaving his father’s restaurant will be detrimental to their place at all. Still, it is very strange to go and work for the enemy, just as it was when Hasan learned that Marguerite worked there. And getting a job over at Madame Mallory’s place isn’t so easy. First, she throws out the food he brings her. Then his father’s restaurant is set on fire and Hasan’s hands are burnt. This leads to he and Madame Mallory having to actually make food together, in order for her to sample his work.

Hasan does indeed go to work for Madame Mallory, and while this left turn is very unusual in every regard, the good thing about it is that his father actually gets on board. Not at first, of course. Before accepting the situation, Abbu goes over to Madame Mallory’s and threatens to bring her up on charges of child abduction. But when he does realize that this is best for Hassan, Abbu is the one who negotiates with Madame Mallory exactly how much she will be paying his son. And he gets her to increase the price quite a bit. The new conflict that arises then is between Hasan and Marguerite, as she becomes jealous. This is a natural response to him coming to work there, and the movie should have probably taken more time with it. But instead, this conflict is handled pretty quickly.

Maybe that’s because the movie still has a good deal of story left to tell. Hasan doesn’t just stay at Madame Mallory’s. The story is about his climbing the ladder as a chef, and the next stop for him is going to Paris to work for a major restaurant. At this point, the movie starts to feel a little long. And it keeps on going further, with his travels and accomplishments. On the one hand, it’s not predictable and certainly not the way we thought this one would go. And that’s a very good thing. But on the other hand, it also feels like one of those movies with multiple endings, where the thing just keeps going and going with one ending leading to another and then another. The competition between the restaurants was the best part of this movie, and it would have been nice if that lasted a little longer. But for the most part, this is a clever and witty little film, and definitely a light-hearted enjoyable time.