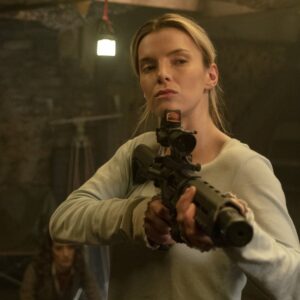 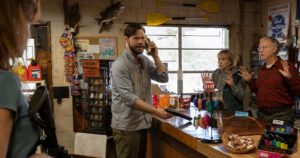 Another take on The Most Dangerous Game, this one isn’t nearly as good as Ready Or Not, but it’s still entertaining and somewhat worthwhile.

The Hunt is an okay movie. It’s another variation on the humans hunting humans, Most Dangerous Game idea. And we’ve seen a whole ton of those at this point. The new thing that this movie brings to the table is an affiliation with politics. The movie pits the two sides… the hunters and the victims, on the two different sides of the political landscape, with the victims being conservatives and the hunters being liberals. And there are plenty of jokes throughout the movie that use this as its basis. But other than that tone and humor, the actual story. here isn’t all that great. The movie still is about a group of people hunting another group of people with an arsenal of weapons, running around through the woods. It’s a fine idea, and if it had been made ten or twenty years ago, this one would be seen in higher regard. The problem is that we’ve gotten so many better movies since then, that take the manhunt idea and run with it in more creative directions. This movie might have a little bit of edge, but it’s not nearly creative enough.

Joining the list of manhunt movies where people are killed for sport, that go all the way back to the original story “The Most Dangerous Game,” we now have The Hunt. There are so many movies on this list, from Hard Target to Surviving the Game. More recently we’ve been getting more extreme variation on the genre with Cabin in the Woods and Ready or Not. Those two movies were both fantastic. The Hunt is not. It’s a movie that isn’t nearly as creative (Cabin was about monsters and horror tropes, more than hunting people and Ready was about a family playing deadly hide and seek in a mansion,) and doesn’t really try to be. These days, if you’re gonna make a movie like this, you need to bring something new to the table. The Hunt certainly does, with its political satire, but it’s not quite enough.

The story here is that a bunch of people wake up in a wide open field, in the middle of nowhere, with locked gags on their mouths. They make their way to a large wooden box in the center of the field and inside of the box they find a wall of weapons. This movie has the least fun with the choose your own weapon trope, of any movie I have ever seen, (Ready of Not, on the other hand, knocked this idea out of the park, with characters getting weapons like battle axes and crossbows and responding to them the same way characters reacted to being told their color names in Reservoir Dogs.) Here, the choosing of weapons is glossed over. The brains behind the movie (including Lost’s Damon Lindeloff,) must be thinking, we don’t know the characters yet, so why should we care what weapon each of them gets? This isn’t Clue, where the individual weapons make a big difference. Wrong. Those weapons could have helped us learn the characters and introduce us to them.

In fact, one of the big problems with this movie is that it never gives us a clear sense of who the characters are, and how many of them there are. We are often left wondering if there are more victims out there, since a count of how many “players” are in this game is not established. Eventually, we are told that there were twelve of them to start, but at that point there are only two left, so knowing the number doesn’t really make a difference anymore. We don’t need to keep count or track of them at that point, since we are told that we are watching the final two.

It’s funny because on the one hand, there are the usual tropes of these movies, which are important, and on the other hand, the movies that get creative with their overall plots are the more creative ones. But more than a trope, it’s practically a rule that we get to meet the characters before they all start getting killed. Otherwise we have no idea who they are, and don’t really care at all. Not the case here. And it’s definitely a trope to establish which weapon each person gets when choosing from a wall or panel of different weapons. Pulp Fiction even had some fun with this, with a scene where Bruce Willis keeps changing his weapon and trading up, over and over again, eventually settling on a katana sword. But The Hunt misses both of those opportunities.

That being said, it does have some cool things going for it, even at the start. The opening scene on the airplane, where one of the would be victims wakes up and is killed by the passengers is well done. It’s the kind of opening scene we need, to get our attention and let us know that something going on here is sinister and that these people are pretty devious and deadly. And then the scene on the field begins and for a good while we have no idea who the protagonist of the movie is.

Now, this is pretty cool. This is something creative. Because the movie really does keep us guessing, and thinking we are ahead of things, only to find out how wrong we were. We do follow a character for a little while, and assume this will be our protagonist, and then suddenly the character gets killed. And then we start following another character (the first one is the girl who we see wake up, played by Emma Roberts, the second is a guy who is next to her when she is killed and tries to save a woman who falls into a spike pit.) That guy gets killed. And then we are with a group of three character, one of whom is played by Ike Barenholtz. We think these might be our protagonists. But then they are killed. What a creative way of getting us into the world, watching our supposed leads get picked off, one at a time.

In fact, another thing that this movie has going for it is that it shows us two sets of characters getting picked off,. First, it’s the victims of the game. The people who are being hunted. And then in the second half the tables turn, and now Crystal, (the woman who turns out to be the actual protagonist,) is going after all of the killers. The hunter has become the hunted. Movies in this genre generally don’t do that. They give us one group of characters who will be killed one by one, be it Surviving the Game and the group of hunters, Saw 2 and all the players in Jigaw’s game, inside of the house, or even Ready of Not with the family members. But The Hunt wants the best of both worlds, and it gets it.

Still another cool thing about this movie is the political agenda. This one is all about liberals versus conservatives. The liberals are the hunters and the conservatives are the victims. And the dialogue throughout the movie is laced with jokes that show this off, from discussions about being on Hannity to using the word deplorables (Hillary Clinton’s phrase when she was running against Donald Trump,) to discussing cultural appropriation, pro choice vs pro life, and which terms is more sensitive to use… black people or African Americans. The humor in the movie mostly comes with this line of dialogue. And neither side is meant to look especially good. The liberals here are obviously all psychos, but the conservatives are meant to look like redneck idiots. This movie claims that it’s a political movie that doesn’t really take a side on politics, and I suppose that’s true.

There’s a cool flashback moment, about three quarters of the way through the movie or so, where we meet Athena (Hillary Swank,) for the very first time. Now she’s the big bad of the movie, the leader of the villains, and yet we are only really seeing her for the first time now. That is kind of problematic. We got a glimpse of her in the opening scene, meaning we only saw her from behind,  but that hiding her in shadow-of sorts was more like a gimmick to make us curious. Still, we only saw the evil leader of Cabin in the Woods at the very end, and there was no problem there, so maybe there shouldn’t be here, either. It’s just that in Cabin, the role was clearly a one scene cameo, and here it is one of the top billed stars. At least her entrance is memorable though, with the flashback showing us the way a text could be taken out of context and something that was meant as a joke could get way out of hand.

This movie might not be anything special when compared to so many other, better movies in the genre, but it still does have plenty of redeeming factors. The political background that this is set in, and way that it features so prominently into the plot, is great. The early scenes where we don’t know who the protagonist is, are fun. And the flashback scene, which uses a text from the very start of the movie and now shows us the aftermath, is creative. But most of these things are small, and add up to one scene or a tiny collection of moments. The big one on that list is the political references and that is mostly background material, peppered throughout the film. It’s not so much about the plot as it is about the characters. The plot is the problem. This movie really is just about a bunch of characters chasing each other around in the woods, trying to kill each other, and that never really changes. A little more creativity would have gone a long way.