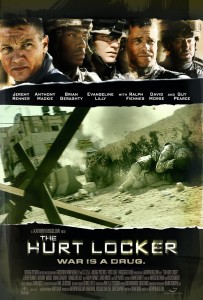 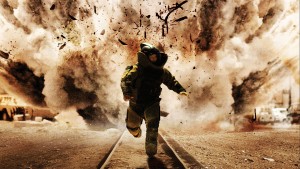 An intense and gripping thrill ride of a movie that throws you into one explosive situation after another and still manages to get the details down.

The Hurt Locker is a modern masterpiece. how else to explain it being the best movie of 2009, better than star trek or Inglorious Basterds. and yet it is. that’s because it is loaded with amazing action and exciting scenes. it takes you from one crazy setup to another and in each one of them there is a new challenge and mission. and while doing this, it also finds time to explore the three main characters, and also to give us tons of details about what they are doing. this is not a movie that moves quickly, but it’s also not a movie that wastes time. when it lingers, it does so to give us details and make us feel like we are there in the moment, with the characters.

the movie was shot by hand-held cameras, which means the jason-bourne-movies, documentary / dizzying effect. the camera work is shaky and often gets right down on the ground and shoots up so that we can see the ground that the characters are on. all of this might sound terrible, like it is uncomfortable and not what we are used to, but as it happens, what it’s really doing is enabling us to see more of where these characters are. it’s important to see the ground because very often that’s the only thing out there, in the open and empty desert that these guys are in.

at the start of the movie there are three main characters, and in a cliffhanger-like opening, one of them meets a pretty dramatic fate. that opening scene not only introduces us to the team and the way things are done here on the bomb squad (only they don’t call it that), but also introduces us to the world of these experts and the dangers they are facing. when an explosive goes off, it is captured in slow motion and close ups of the smallest details on the ground. that’s because the director of this movie, kathryn bigelow, really wants to show us everything.

we see the two guys who made it out of that first incident deal with the consequences and then meet the man who will be taking over for their team leader. this guy is will james, (played by jeremy renner in his breakout role), and he’s a madman. or as david morse calls him, “a wildman.” james’ job is to go in and disarm bombs. he’s the bomb expert on the team. and that’s really the reason that all three guys are there.

the other two guys, sanborn (anthony mackie) and eldridge, are there with guns to make sure that nothing happens to james. since james is the talent and the asset, the other two guys are basically like bodyguards. and james takes full advantage of that to do whatever he wants. the first time he goes out with these guys, he throws smoke bombs behind him so that they can’t see anything. he says he did it to block the vision of the enemy in case they were watching him, but really he’s making it so that the other two guys can’t do their jobs.

the second time they all go out isn’t much better. it’s to disarm a car bomb and james refuses to give up on it. the problem is that there are lots of people all around them and any of them can be an enemy. one of the reasons why sanborn and eldridge are so important in their jobs here is because someone in the crowd can be the one who set the bomb and can set it off at any time. that’s what happened in the opening. so these two guys are constantly on high alert and sanborn, in particular has a problem with james’ style. james acts as if he wishes the other two guys weren’t even there. he doesn’t seem to appreciate them or ask them for any help and when he throws off his headphones, cutting communication between him and them, it is the last straw for sanborn.

that’s when sanborn lets him have it, and that’s when the guys finally bond. i like that it took sanborn standing up for himself and standing up to james in order for james to respect him. it’s like james was testing him, being as big of an asshole as possible, until sanborn showed that he wasn’t gonna take it. and once he did show that, james became a whole lot cooler. the guys bond while drinking and wrestling and hitting each other as hard as they can. it’s grunt stuff and when james takes it too far, sanborn is again pushed to do something extreme.

the next time the guys go out, they run into some british officers dealing with a flat tire. it ends up with them all out there as sitting ducks to a couple of guys firing from inside a building. and now we get a shootout with both groups taking over and aim. it’s like the scene with the germans inside the bunker at the opening of saving private ryan or the scene with them firing out from inside a bunker in the thin red line. and it’s a great scene here in The Hurt Locker, with sniper rifles firing and then the results happening seconds later, as opposed to instantaneously like in most movies.

as the movie goes on, we start getting more into character and a little less into all of the missions. we still do get a few more of the missions, including a body bomb and a guy with a bomb strapped to him, but now we are getting deeper into who these guys are. james takes a couple of trips into the town and each one of them ends up with pretty intense results. both times he goes out there seeking vengeance and both times events happen that he was not expecting. the scene where he chases down the killers of a young boy, in particular, ends in a very interesting manner.

The Hurt Locker is a deep movie. yes, there is a lot of action and the action is all fantastic, but the movie goes way beyond that. it dives into who these characters are and why they act the way we do. we learn a lot about james and eldridge, and enough about sanborn to understand why he puts on such a front. these characters are conflicted and uncertain about what they’re doing out here. i love that the movie has no political message at all, unlike something like three kings, which constantly mentioned president bush. The Hurt Locker isn’t about the government. it’s about the army and the bombs and the best ways to disarm them safely. it’s a hell of a movie and is absolutely cutting edge stuff. The Hurt Locker won the best picture of the year award, and i was kind of shocked by that only because i didn’t think enough people had seen it. since it still won, it serves as an example of a time when the academy didn’t go for the most popular choice (which would have been Avatar), but went with what was really the best choice. i’m glad the academy was smart enough to realize how great The Hurt Locker really is.