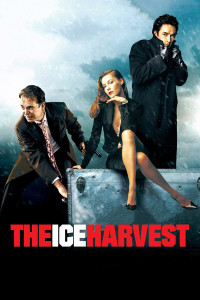 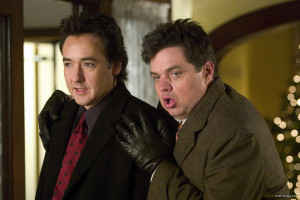 A cool movie that seems to put atmosphere ahead of everything else while it presents a strange black comedy film noir.

It’s a strange thing to like a movie, and then at the same time know that it’s not really that great. it comes when there are no clear adjectives to describe the good qualities about it. in the case of The Ice Harvest, the black comedy – film noir starring john cusack, it’s easier to say what the movie is not than it is to say what the movie is. this movie is not all that funny. and it’s not all that exciting. yet it still works. and the best thing about the movie, by far and away, is the atmosphere.

the film takes place on christmas eve. and it’s one of those movies that all takes place in one single night. the idea here is that the two main characters have just pulled off a heist, and now have to wait around for a few hours before skipping town. why exactly they have to wait, i’m still not sure. but what ends up happening is the main character, charlie arglist, (cusack) goes from place to place, spending time with both friends and colleagues as he tries to kill time and get through the night.

So while the basic premise might be about a guy just waiting around in a town, what ends up happening turns out to be so much more. for one thing, the big mob boss who charlie and his partner, vic (billy bob thornton) have ripped off, knows they did it and has sent a hit man after them. that hit man, roy gelles (mike star) turns up in all different places where charlie would go, asking questions about him.

and charlie has a lot of unfinished business to deal with before he skips town. there’s his buddy, vic, who he doesn’t quite trust. then there’s renata (connie nielson) the manager of the strip club, where charlie works. charlie has always had a thing for her and now that he’s about to leave withcita forever, he sees it as his last chance to make a move on her.

there’s also charlie’s friend, pete, (oliver platt) a local lawyer who gets drunk and makes a fool out of himself. the interesting thing about pete is that he’s married to charlie’s ex-wife. and him and charlie are still friends. in fact, both of them dislike the ex-wife and her parents, and pete even confides to charlie that he used to be sleeping with her while she was still married to charlie.

these two guys are both screw-ups, and in one of the best scenes of the movie, they go to the wife’s parents’ house, where she and the kids (charlie’s kids, who live with her) are staying. they Crash the dinner party and pete makes a bigger scene out of being drunk then he did in the bar before this. back at the bar, he was announcing to everyone how charlie was a mob lawyer. now, here at the house, he waves around a turkey leg like it’s a weapon.

pete ends up being a sort of distraction in the storyline. he’s a great character and every scene with him is a lot of fun, but he has nothing to do with the heist. i suppose that’s the point. it’s only through pete that we really learn about charlie’s past and get to dig into his character. in fact, his family and kids aside, charlie even delivers a monologue to pete where he explains the path his father took and how it kind of gave him a picture of the way the world was meant to work. there’s a lot of back story here and a lot of deep character moments and it all seems to come from having the pete character in the film.

vic and renata, on the other hand, represent the heist. vic, in particular, seems to be untrustworthy from the very beginning of the film. either that he’s just a real jerk, as he convinces charlie that the money should stay with him. after all of the pete stuff is over, and we are somewhere around the halfway point of the movie, things start getting especially interesting around vic. that’s when the famous trunk scene and frozen lake moments come. these scenes end up being the most exciting ones in the movie.

but there are other twists still to come and a pretty cool ending involving characters that we have been hearing about and waiting to see for quite a while. everything seems to come to fruition by the end, and it actually gets kind of scary at times, realizing exactly who can and cannot be trusted. this is a very dark movie, and there’s violence everywhere, but it’s not really the action kind. it’s more of the film noir kind, where plot is placed above everything.

except this movie puts one thing ahead of plot. atmosphere. the movie is all about the frozen night. everything is white or silver and there is ice everywhere. there’s a reason this movie is called The Ice Harvest, and what’s kind of cool is that this one night in a frozen, heartless world premise is combined with christmas. there are christmas songs playing on the soundtrack throughout the film, starting with the little drummer boy song that opens the film. and every one of these songs ends up being kind of eerie in this movie. it’s a strange kind of film, and certainly an interesting one. the casting of so many talented actors in the key roles really goes a long way. and i also like how it’s got that small town quality where you see the same characters again and again, like the cop who keeps popping up just to see if charlie remembers his name. this is a fun movie that really has strong feelings associated with it. those feelings are cold and dark, and putting it all in one night makes a hell of a difference.