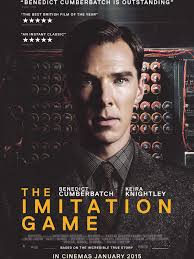 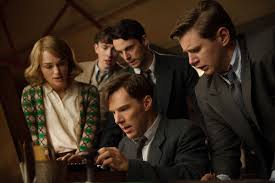 A good, interesting movie that focusses heavily on the life of this code breaker, but doesn’t go deep enough into the actual code breaking attempts or to how they contributed to winning the war.

The Immitation Game is a very interesting movie. It’s the film about an eccentric man named Alan Turning, who was a mastermind at breaking codes. He was put on a team of these extraordinary code breakers who were all working at the same task, to interpret the Enigma machine. This was the machine the Germans were using to encrypt their messages to each other. The movie is more about Turning’s life than it is about the actual code breaking, and that ends up being a problem. Every bit of it is intriguing, but it just isn’t enough of what we really want to see. I like the way Turning figures out the mystery, but the movie didn’t give us enough failed attempts at getting to this point, first. Similary, the film does not do a very good job of showing how Turning’s breakthrough contributed to the allies victory in the war. Despite these things, The Immitation Game still manages to be a good film, and that’s because this character, Turning, is so interesting. He’s like Russell Crowe’s John Nash in A Beautiful Mind, an eccentric who’s heart is in the right place, even when his mind might not be.

The Imitation Game is the movie about Alan Turning, the code breaker who cracked the secrets behind the German machine called The Enigma. It was a machine that took all of the messages the Germans were sending to each other during World War 2, and encrypted them. By cracking this code, Turning found a way to interpret the enemy messages, figure out their plans, and use this to help the allies win the war. The movie is all about Turning and his process. The level of detail here is uncanny, however, it is so closely set on telling  only Turning’s story, that it nearly forgets to show us the bigger picture, which is the actual war.

The movie starts off with voice over about how we, the viewer, need to be paying attention or else we will miss something. This is a lot like the monologue that began The Prestige, the Christoher Nolan directed magician movie, with Michael Caine’s warning that we should “watch closely.” From here, the Imitation Game cuts to Alan Turning’s apartment, having been broken into. He is dealing with the aftermath and stops the police who show up, from doing any sort of investigation. He’s clearly hiding something and the police make note of that in conversation with each other, as they leave his place.

Now we flashback to about a decade earlier, in the middle of World War II, with Turning going for an interview. The interview is with Commander Denniston, (Charles Dance, so good on HBO’s Game of Thrones.) He is a real hard-ass, and doesn’t like Turning’s simple, confident approach. When Turning asks what Denniston knows about him, Deniston picks up his file and reads something. Turning calls him on it, saying, “you don’t know that, you just read it off a paper.” Things are not looking so good for Turning during this interview, and it seems like a lost cause that he will get the job, until he mentions the enigma. Suddenly the entire scene and tone of the scene has changed. Denniston had called his secretary to come and see Turning out, but once that word is mentioned, it’s a whole different playing field, and Denniston sends his secretary away again.

Needless to say, Turning gets the job. He is hired to work as a member of a team of code breakers who are trying to break the enigma device. Turning is an awkward man and he does not get along with his peers. The other members of the team (including Matthew Goode’s Hugh Alexander,) try to relate to Turning, but he doesn’t make it very easy. When they mention to him, for example, that they are going for a sandwich, Turning acts like he doesn’t understand why they are telling him this. He doesn’t consider that an invitation, and lets them know it.  Turning also has a problem with being just another member of the team. He doesn’t like or agree with what they are doing there, and the approach that seems to be getting limited results.

When Turning tells all of this to Commander Denniston, he is laughed at. Who does this guy, Turning, think he is, saying he doesn’t want to work with the others, and instead wants to be in charge? Denniston tells him, sarcastically, that the only way that would ever happen is if the command came down from Churchill, himself. And just like that, Turning is writing a letter to Churchill and sending it off with another man in charge of the unit, Stewart Menzies (Mark Strong.) Not long after this, Churchill responds with a letter saying that Turning is to be in charge of the unit and that the men who are already on it are to report to him.

Turning’s first goal, as newly appointed leader of the unit, is to fire two men who he thinks are not cutting it, and then to look for new people to fill their positions. He arranges a test where a number of men come in and try to solve a puzzle in under six minutes. The kicker is that doing it in this small amount of time is impossible, or so Turning believes. It takes him eight minutes to do it, himself. One of the people who comes in to try is a woman, Joan Clarke (Keira Knightley,) and she is met with opposition from security guards at the door. They don’t even want to let her in to try. Turning interferes with that and gets Clarke a seat at one of the puzzles. She ends up solving it in under six minutes, proving somehting that Turning did not believe could be done at all.

Clarke is hired to join his team, only being the only woman around comes with its set of problems. She doesn’t want to live in a place where she is surrounded by only men, and her parents want her to come back home instead. Turning solves this problem by finding quarters for her with the women who are helping with the war effort, staying at a nearby base. It’s the first of many obstacles that will come up. Another one comes when a friend of his discovers that Turning is gay. The friend doesn’t care, and is fine with looking the other way on it, but is insistent that Turning doesn’t tell anyone. Later on, we find out that the friend might have had more than just Turning’s interests at hand, when he advised his boss on that. When the friend ends up needing a favor and a secret kept, himself, he uses the fact that he knows that truth about Turning, as leverage.

While all of this conflict is going on, we see very little about the enigma and their attempts at decoding it. At one point, Denniston shows up with a bunch of officers, ready to shut Turning down. It reminds me of the scee in Ghostbusters when a bunch of official looking men show up at the station with Walter Peck ordering them to shut the whole thing down, claming that it is a scam. Denniston, similarly, believes that if there was any turth to what Turning is doing here, it would have produced some kind of result by now. That’s when Turning’s men step up and tell Denniston that if he fires Turning, he will have to fire them too, because they are all planning on walking out. The men claim that they might not have results, just yet, but that they are very close.

Turning proposes to Clarke, at one point, despite the fact that he is gay. He sees it as a cover that will get people off his back who are suspicious about him. Not long after that, one of Clarke’s friends tells them a story about how she listens in on the calls of a man who she has fallen in love with. They speak different languages, but even still, she knows some of the words in that language, and just loves the way he says certain things. She’s joking, of cousrse, but hearing the story gives Turning an idea. If he can focus on just three words that appear in every German message, he can use them to slowly map out the alphabet of the other letters and words being used, and crack the enigma. The three words he uses are “weather, Heil, and Hitler.” With that approach, he cracks the code.

The problem with all of this is that up until now, the war has been completely in the background. That’s putting it lightly. The truth is, it’s barely been a presense at all. Even the code breaking has taken a backseat to the personal stories of Clarke staying or going, Turning being gay, and Turning and Clarke getting hitched. Now, suddenly the code is broken, and we get a quick black and white montage of how it led to the allies winning the war. We need more. Considering the stakes and how important it was that this code get cracked, once it finally does, the results should have been a lot more satisfying. Still, the movie has other tricks up its sleeve, including a twist about a spy, and a reveal about what happened to a boy who was friends with Turning as a child. Everything that is on screen throughout this movie is interesting. The problem is with the things that aren’t on screen. Maybe there could have been a scene of Churchill meeting with Turning, towards the end of the movie, to thank the code breaker for his contribution. Something like that might have helped point out how Turning’s work really led to a victory and to a much bigger picture.