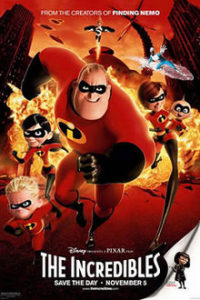 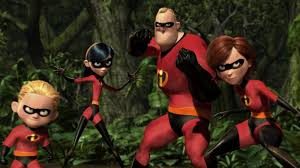 One of the smarter Pixar Animation Films, (and that’s saying a lot,) this one spoofs both superhero movies and family life at the same time. And it does it by finding the humor in the ridiculousness. Right off the bat, our superheroes are being interviewed for a documentary in which they are addressing the problems of their profession and what it’s like outside of work. From there, we get into lawsuits, office jobs, and trying to manage a houseful of kids. Not the kinds of things you would expect to find in a superhero film. But don’t worry. The action is coming. If the first half is about the family life, then the second half is about the action fantasy, complete with secret hideouts and giant robots. The combination of these two types of movies smashed together works out perfectly, making this movie a humorous satire packed with excitement.

The Incredibles is a movie that has it all. It’s got the action movie superhero story, (which borrows a good amount from James Bond as well,) but it’s also got the home life, family in crisis material. This movie gets into Office Space territory with the work place, and Batman Begins territory with costume design. It goes black comedy dark when it needs to and light-hearted kids saving the world fun when it needs to. And it maintains all of these vastly different stories and tones without ever feeling like its doing too much. Perhaps that’s the biggest accomplishment of all.

The movie opens with a documentary about superheroes, and right away gets us laughing with how Mr. Incredible, this superhero who can do so many remarkable things, is having trouble attaching his microphone clip to his shirt. From there, it’s hearing the superheroes complain about their lives, whether it’s how the world can never just stay saved, even for a little bit, or how superhero women are always trying to tell you their secret identity because they believe it will make the relationship stronger. This movie does play on stereotypes about women, being nagging and all that, (whether it is Elastigirl or the woman who Frozone keeps company with, that you always hear shouting off screen,) but the jokes are funny, and the way they help make superhero life seem like it could be real, is pretty great, so we give it a pass on playing to certain cliches. The characters may represent cliches, but the story and presentation of superheroes certainly do not.

After the documentary, we see Mr. Incredible out on a mission, going after a bad guy. He’s in pursuit, chasing the guy down in his car, when he has to stop and pull over to help an old lady rescue her kitten from a tree. And even the way that Mr. Incredible does this, pulling the tree out of the ground and then trying to shake the kitten out, is hilarious. And then it’s back to the chase, where Mr. Incredible and Elastigirl meet on a rooftop, while taking the villain down, and we get all kinds of playful banter. At one point, the two of them argue over who caught the bad guy first, and even the bad guy weighs in about it.

It turns out this is the evening where Mr. Incredible and Elastigirl are getting married. Their personal lives have reached a high point, and their professional lives have as well. It’s the pivotal moment in society when superheroes are on top of the world and riding high. And from there, it’s all downfall. Mr. Incredible saves a man who is trying to commit suicide, and in the process of saving him, the man breaks his neck. This man uses the opportunity to sue Mr. Incredible, saying, “You didn’t save my life, you ruined my death.” And the people who were on board a train, when Mr. Incredible was saving this guy, and also retained injuries from the train getting bumped, decide to sue him as well. The result of all this is that superheroes have to go away and give up saving people. Through news stories we learn that the city has made a deal with them, that superheroes will not be held responsible for any damage they’ve caused in the past, so long as they give up being superheroes and lead normal lives from this point forth.

And that brings us into the present, when Mr. Fantastic, now going by the name Bob, has three kids with Elastigirl, and works at an insurance company where he sits at a desk that is way too small for him. He takes orders from an angry short boss, whose only interested in helping the stock holders by not paying out on insurance claims. Mr. Incredible drives a tiny car home, where he can barely fit inside, and then can’t get the car door to shut without having to slam it and break the glass window. He’s pretty miserable, and this is where the Office Space material comes in, with him slaving over his desk, wanting to be anywhere else. And when an opportunity arrises to throw on the costume and do some superhero work again, Mr. Incredible throws away the insurance job like it was a piece of trash, making sure to give that mean and angry boss a pounding on his way out.

Mr. Incredible is recruited by a mysterious woman, who refuses to tell him who his employer is. And Mr. Incredible doesn’t care. He is so happy to be doing superhero work again that he doesn’t pay attention to the suspicious situation of who these people are and why he should be noticing the red flags. Instead, Mr. Incredible starts fighting robots and other threats on the island, where the woman takes him, and is having the time of his life. And this pays off back at home as well, where Mr. Incredible is suddenly on top of his game as a dad, doing his parental work better, and with more positive energy than ever.

But it turns out things aren’t quite as great as they would appear. The mysterious boss is indeed up to something that turns into a threat, and suddenly Mr. Incredible is in trouble. But luckily his wife is on top of things, and has been suspicious of where her husband was going ever since she heard the woman’s voice on the phone with him. She thinks that her husband is having an affair, but in order to track him down, she’s got to get back to her superhero identity, and that requires a visit to Edna E. Mode.

Edna is absolutely the most fun character in this movie, (although Frozone is pretty close.) If she were played by an actress in real life, (or perhaps modeled after an actress,) it would be Linda Hunt in a heartbeat. She’s a tough talking, short scientist who specializes in models, clothing, and weaponry. Specifically she makes costumes for superheroes that can handle whatever kind of opposition forces might come their way. And she takes Elastigirl over demonstrations of the outfits that Edna has made not only for her, but for each of her children, including the baby. The demonstrations, with giant weapons coming out and firing on the dummies wearing the costumes, are a lot of fun. The comedy in this sequence is absolutely ferocious.

And so Elastigirl brings home the costumes for her whole family, even though she has no intention of her kids going along. But they find the costumes, figure out who they’re for, and stow away on their mother’s plane to come and help save their dad. And this turns into a wild family adventure on the island. The evil lair where Mr. Fantastic is being held owes more than a little to the lairs of countless James Bond villains, but that’s okay. Like the familial roles and how they’re hitting the cliches, the same goes for the lairs. This is a comedy and a satire and it is spoofing the superhero genre, spy movie genre, and even unhappy family man on the verge of a mid-life crisis genre, (if there is one.)

The Incredible is a very smart and very fun adventure movie. It’s one of the better animated films to come out of Disney / Pixar with it’s visionary ideas and creative ways of taking a genre we know all too well, (the superhero movie,) and spinning it on its head to find the humor. This movie is what the Fantastic Four films always strive to be. Both smart and funny. And yet for some reason those movies always end up too dopey or too dark. The Incredibles knows how to avoid all of that. There have been other superhero animated movies since, (Big Hero 6 was even by the same studio,) but the Incredibles is one of a kind and stands on its own. Perhaps that’s because it isn’t about how cool it would be to be a teenage superhero or a billionaire playboy superhero, (both Batman and Iron Man,) or anything like that, but instead, it’s about how to balance out superhero life with family life. And this scenario makes for tons of very funny setups and ideas.