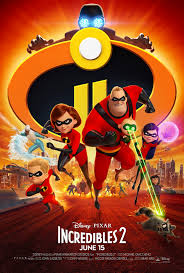 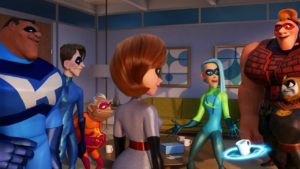 Entertaining and fun, this movie takes the family concept from the first film and digs far deeper with the story to be about both the resurgence of superheroes, and also a much bigger world filled with all different superheroes.

Like all Pixar movies, this movie is definitely enjoyable and has plenty entertaining ideas, but it in no way comes close to some of their better films. That includes the original Incredibles movie . In that movie the idea of parodying the life of a superhero was fresh and fun. Here, it’s nowhere near as fresh of an idea. There are definitely some cool things happening here, (like the bike that splits in two, or the baby vs the raccoon fight,) but for the most part this is a copy of the first film, (new financier shows up out of nowhere to offer our hero missions, payment, and an opportunity to come back into the spotlight.) Only this time its Helen doing all the action while Bob stays home with the kids for some attempts at comedy. Most of them work. There’s a cool mystery here and a whole lot of new superheroes. They took their time to make this movie, waiting fourteen years after the original, and it shows.

The original Incredibles movie was absolutely terrific. It pretty much did everything right, from its opening black and white superhero documentary to its putting our protagonist, Bob (Craig T Nelson,) into the corporate, cubicle world, to its private island owned by a villain, Bond-like second half. The good folks at Pixar made us wait fourteen years for a sequel. The wait was not worth it. The follow up film, The Incredibles 2, isn’t even close to being on the same playing field as the first movie. And maybe that is partially because of how much time has gone by, but it’s also because the sequel just isn’t all that smart.

This movie takes on a very similar plot to the first film. A wealthy individual, (in this case two individuals, of a brother-sister team,) offers to finance our heroes in order to bring them back into the game. The reason they’re out at all is because superheroes are illegal. And so one of our heroes goes to work for these wealthy financers while the other stays home with the kids. The twist (if you can call it that,) is that this time it’s Helen (Holly Hunter,) the mother, and not Bob, who is called to duty.

The movie opens with the continuation of a scene that ended the last film. A villain known as the Underminer comes up from the ground, looking a lot like a mole man. He’s got a giant drill machine and his plan is to dig around banks so that the buildings fall into the ground, and then to go in with a giant vacuum-like machine and duck up all the money. Watching our heroes try to stop him serves as the perfect connecting piece between the two movies. We get to see the exact same situation and setting that the first film ended with, and now witness how it all plays out.

And this includes an unexpected angle about the teenage daughter, Violet, and the boy she likes, Tony, who happens to be in the parking lot when the Underniner attacks. Tony has recently asked Violet out on a date, (something else that happened st the end of the last film, to show that Violet had become confident.) Now, he hides under a car in the parking lot, as the family takes to Underminer on. The entire scene (as much of it as Tony is in,) is shot from his point of view, looking up at the heroes, from under the car. He sees Violet take her mask offf out of anger, to reveal who she really is. And Violet sees him see her, and tells her father.

That leads to Bob having his friend, (Jonathan Banks,) bring Tony in for questioning and erase his memory. The good thing about this is that he no longer remembers what he saw, and that Violet is a superhero. The bad thing about it is that he completely loses all memory of her, including their plans for an upcoming date. When she confronts him about it, at his locker, he has no idea who she even is.

If this sounds kind of dopey for a superhero movie, all about dating, it kind of is. Of course, this is just a subplot with Helen’s story taking center stage, but even that one isn’t all that great either. The wealthy moguls who hire her are Winston Deaver (Bob Odenkirk,) and his sister, Evelyn Deaver (Catherine Keener.) They want to bring superheroes back into the spotlight, and that starts with Helen’s superhero persona, Elastigirl, saving the day a few times. She will pave the way, and not Bob, (Mr. Incredible,) because when he goes out and fights crimes there’s always loads of destruction after.

So Helen goes on missions while Bob stays home with the kids. Her first mission, to stop a runaway bullet train, is a blast. Especially when her motorcycle starts separating and Helen’s elastic-like body has to hold it together. That scene of her racing through the streets and into tunnels, with the bike in two parts, and her stretched all over, is pretty fantastic. But it’s the only really great action scene in the movie. And instead of this being an exciting, action packed film, it often feels more like Mr. Mom with Bob at home with the kids.

The movie basically doesn’t have a whole lot to offer. Some of the things st home with Bob are funny (the joke about him not bring able to do his sons math homework, for one,) but for the most part it’s annoying to see him relegated to the house. And Helen’s plot isn’t especially interesting either. A villain called the Screen Slayer is somehow hypnotizing and controlling people and using them to carry out crimes. Helen keeps pursuing and catching people she believes yo be this character, only to realize that the people are just hypnotized under his spell.

The one new addition to this story that really works is the inclusion of other superheroes. Because Helen is such a success, with her early saving the day accomplishments (first the runaway train, then rescuing a congresswoman’s helicopter,) it brings other superheroes out of the shadows and into the limelight. And each one is interesting in his or her own way, (mainly grczuse of their unique and creative powers.) So for a while, Helen is the inspiration for these characters, and they shmooze in social settings like parties and news interviews, but at a certain point we do get to see them fight as well. And that’s a lot of fun too.

But there’s plenty here that doesn’t work at all. Seeing Bob relegated to house duty isn’t nearly as much fun or as funny as one might expect. His dealings with the baby are entertaining (really, the baby is funny in his own, like in a scene where he takes on a raccoon,) but that’s about it.  And the super suit, weapons-maker Edna (the Q of the series,) is comoletely wasted here, relegated to the role of babysitter. Lastly, this movie is s little too female centric. The story about Helen being called into action while Bob stays home, is fine, but at a certain point every character involved in the action is a woman from Helen to the congresswoman to the protege younger superhero, to a character who I won’t spoil here, but let’s just say she appears in the final fight. Would we notice if it was all men instead of all women? Maybe not. It’s a fair point. But in the final scenes when both Bob and Helen are called into action, and Bob finally gets a moment to shine, but then only Helen goes up to the plane for the climax while Bob stays down below, things feel a little too forced. The movie is enjoyable, but not nearly as good, original, creative, or smart as the first film was.