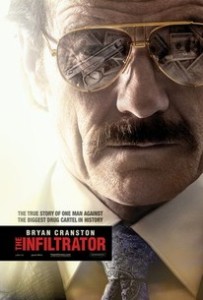 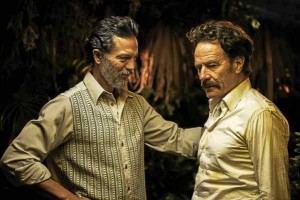 An entertaining movie that hits all the right beats, but still ends up feeling kind of generic, like something we’ve seen before.

This movie definitely plays in familiar territory, where you feel like you’ve seen a lot of this before, however, it also has some cool ideas to add to the genre. One is the way that these u fee over agents take their identities from headstones at the graveyard. Another is the tape recorder suitcase and how it nearly gets undercover agent Robert Mazur (Brisn Cranston,) into a lot of trouble. There are lots of memorable  scenes and moments here, but the problem is the villainous characters are not given much development at all. They’re not given enough screen time or exposure. Other than that, however, the movie is pretty good.

The Infiltrator is a movie that tells a very familiar story, about an undercover agent working to bust a Columbian drug cartel. This would be the Medellin cartel of Pablo Escobar, (the biggest and most well-known cartel in history,  as seen on the Netflix TV show called Narcos,) At the movies there have been countless examples of similar films over the years. From Donnie Brasco to Black Mass to The Departed, the story of informants and undercover agents is told on a pretty regular basis.

And yet, The Infiltrator is still a worthwhile film. Familiar, yes, but still pretty entertaining. Especially with regards to seeing just how deep undercover this man, Robert Mazur, is willing to go. The movie packs a cast of talented actors from Bryan Cranston (Mazur,) to John Leguizamo, Diane Kruger, and Benjamin Bratt. But this is the B list of Hollywood stars, which is to say they have the talent, but not so much the recognition. Maybe that’s what a movie like this needed. After all, we’ve already seen the A list version of this kind of story, with Steven Soderbergh’s Traffic.

The Infiltrator opens with a seventies bowling alley scene. Mazur is undercover, rocking a Burt Reynolds mustache and leather jacket. He hands off some cocaine to the waitress and makes a deal with another player at the alley. And then he goes into what appears to be cardiac arrest. The FBI busts in, throws Mazur in the back of a van, lifts up his shirt, and we see that the wire tap he was wearing was actually burning a hole right into his chest. So ends that undercover stint.

When he gets home, we learn that Mazur has a wife and family. His wife, Evelyn, wants to know if Mazur is done. She wants her husband to retire. Mazur burns the IDs of the man he was playing on a grill, putting that one to bed, but it isn’t long before he is back at it again.

This new case begins with a visit from Emir Abreu, (John Leguizamo.) Abreu has a case that he’s ready to go undercover on, where he is playing a man with a strong connection to a top banker. The only problem is, he needs someone to play the banker. That’s where Mazur comes in.

Watching the work that goes into the start of a sting operation is pretty neat. First, the guys have to visit a graveyard and come up with identities. They look at gravestones for the right sounding names, and also the right year when the person might have been born. Then they go into the system and take this person’s social security number. Another thing they do, or at least Mazur does this time around, is he looks for someone currently serving time in prison, who can lend authenticity to his operation. Mazur gets this guy to be released, so long as he will help with the investigation. Now that doesn’t mean being an informant. It means being in on the lie, and pretending to work for Mazur, to add to his credibility, in case the people he’s dealing with decide to check out the criminal records on his crew.

With Abreu pitching his banker boss as an important connection to the guts he’s been speaking with, these men naturally want to meet the man they’ve been hearing so much about. That’s where Mazur comes in, arriving fashionably late. These guys hit it off pretty well, and all seems to be going smoothly until they wind up at a strop club, and Mazur has to turn down one of the services. He gives a story about having s fiancé and having screwed up his first marriage, but none of it goes over very well.

In fact, the lie is so unbelievable, that the FBI now has to help Mazur cover his tracks by providing him with another agent who will be playing his fiancé. This gets messy in a number of situations. One of the more memorable ones has Mazur out at a restaurant with his real wife, Evelyn, when  the waiter brings them an Anniversary cake. There’s a mob boss who happens to be at the restaurant at the same Tima, and joins them. Mazur introduces Evelyn as his secretary,  and says he’s taking her out for her birthday. When the anniversary cake arrives, and the waiter insists this is what Mazur ordered, Mazur smashes the waiters head through the cake. This is  very much like the Donnie

While there are lots of memorable ideas and moments in this movie, like the suitcase which starts recording when you turn s pin, or the drive by scene where the man driving Mazur gets executed, not everything about this movie works. The characters in the cartel are probably the least memorable of all. They just aren’t given enough screen time. Roberto, the character played by Benjamin Bratt, in particular, doesn’t have anything to make hiM stand out. Neither does Amy Ryan, who plays the head of the undercover operation, either. These are great actors, (especially in the case of Ryan,) who just aren’t given enough to do. The cartel characters are the ones who we should be afraid of the most, as the villains of the movie, and yet we are barely given enough to remember who they are.

The way that the movie lacks in characters is a problem. Scary mafia or drug cartel characters can be the best thing about a movie like this, if done right, from Joe Pesci in Goodfellas to Benecio Del Torro in Savages. But this movie doesn’t really give them a chance. Other than the lack of villainous characters, however, things are pretty good. Cranston is great as usual, and theRe are lots of fun and entertaining scenes. All things considered, it’s a pretty good film.