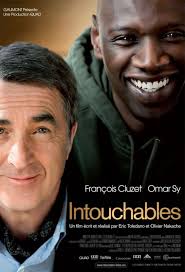 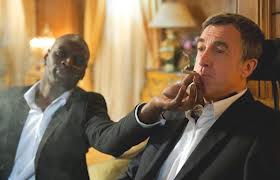 A very funny and enjoyable film about a parapalegic and the most unlikely of people he could choose to be his caregiver.

this is a fun, lighthearted film that takes a dramatic subject and approaches it in a very unusual way. it’s the story of a paraplegic and his caretaker and the catch is that his caretaker is an african american man from the streets who doesn’t really want to be there and isn’t afraid to insult anyone or anything. that sounds like he’s an awful person with a bad attitude, but instead, it’s more like he is constantly cracking jokes, and pointing out how ridiculous things are in high class society. the guy he’s taking care of, phillipe, loves it. the result is a movie about two characters who both experience something they never have before and never thought they would. the movie’s energetic and free-spritied tone are what propel it along and keep it jovial the whole way through.

The Intouchables is a very enjoyable movie about a subject that isn’t usually reserved for comedies. the subject is a paraplegic and his caregiver. now, granted, this movie might not be considered a comedy, but it is more funny than anything else. not slapstick or anything, but just good natured scenes of characters having fun or cracking jokes. most movies that try to tell a story like this go the opposite route, getting dramatic and serious. those movies are usually the artsy Oscar films like my left foot with daniel day lewis or the diving bell and the butterfly. the intouchables is something very different.

it is clear that this will by a unique film from the very opening scene. this movie is the very definition of how to grab the audience with something catchy. the movie opens with a car chase through the streets as Driss (the caretaker) and Phillipe (the paraplegic) speed around, while being pursued by police. the two characters crack jokes and make bets against each other the whole time. first, driss bets that he can get somewhere faster than he really can. then when the police show up, driss bets that he can get them to go away, and also get a police escort to the hospital. after getting out of the car and speaking with the police, he is able to pull it off. i like the way the movie lets us hear the conversation and exactly how he did it, instead of keeping us in the car with phillipe.

that opening car chase, which ends with the police escorting them to the hospital reveals a little bit about the characters. we learn that phillipe is a paraplegic and that he and driss have a relationship of jokes and thrills. the scene ends with the earth, wind, and fire song, “september,” and a cool opening credits sequence, and the whole thing works flawlessly. the movie ends up talking a lot about earth, wind, and fire, since it is driss’ favorite band, and at one point he even does a dance number to their music. i only wish they used the song, “let’s groove.” oh well.

that opening scene might have been gripping, but it’s the one-two punch with the next scene that really gets us involved. the second scene of the movie is the interview sequence. it takes us back to when driss first interviewed with phillipe and his assistant to become his caretaker. it starts with driss waiting outside phillipe’s office in a waiting room with many other candidates. after staying in the room for a while, driss finally gets up and cuts off the next in line, saying he can’t wait anymore. he goes in and meets with phillipe and is the exact opposite of everyone who came before, (we know because the movie showed us those previous interviews.) driss is insulting and rash. he cracks jokes, has an attitude with phillipe, and hits on the assistant. and yet, this is the most unique interview of the bunch. this guy actually has personality and humor.

from here we get to see driss at home. he’s in the bathroom, taking a bath in a tiny tub that he barely fits in, and suddenly a bunch of little kids come storming in. we assume these kids are his simply because the massive age difference, but it turns out we are wrong. they are actually his siblings.  we don’t learn this until later on in the movie, when driss’ backstory finally comes out, but this first scene of his homelife shows what things are like for him and where he lives.

the next day, driss goes to phillipe’s mansion to pick up papers that he needed to get signed which would show that he interviewed there. driss didn’t really want the job, and certainly wasn’t planning on getting it, but he just wanted the papers signed so that he could show he was going on interviews. when they tell him that he’s hired, upon his return, driss can’t believe it. they show him around the place and lead him to his own, private quarters including a giant jacuzzi bath tub. it’s like a combination of eddie murphy in trading places and richard pryor in brewster’s millions.

back at home we learn more about driss’ life away from phillipe. he has stolen a valuable egg sculpture from his new employer, and his mother is at home to catch him. as the movie goes on we learn more about the relationship between driss and his mother, as well as finding out the story behind having all of those kids running around. we learn that driss was adopted, and that it’s actually not his mother who he’s living with, but his aunt. we learn that after driss’ uncle died, his aunt got pregnant by many men, and that’s what led to all of the kids.

while the movie does occasionally alternate between driss’ home life and his life with phillipe, a vast majority of the film takes place at the mansion. that’s becuase at the heart of this movie is a story about a guy not fitting in to high society. for phillipe, this is exactly what he wants. driss offers him something different than he’s ever been around before. it’s like a final new experience. when they go to the opera together, for example, driss sits next to phillipe and either cracks jokes or laughs the whole time. instead of getting angry or embarrassed, phillipe loves it and can’t help but laugh at driss’ jokes.

similarly, another scene that shows how driss responds to this new lifestyle that is far removed from anything he has ever experienced, is a party scene thrown for phillipe at his mansion. this is a party where phillipe’s large, extended family is invited. apparenly it happens every yea, and the relatives always show up. phillip says they come so that they can see that he’s still alive. the party has a live orchestra playing classical music, which phillipe loves. driss doesn’t. he listens respectably for a while, but after the guests have left, he can’t help but tell phillipe the truth. this means making jokes about one of the songs sounds like it’s from a tv comerical and another is the song that compenies use when they pu you on hold.  the end, phillip has them play things just for driss to see if he knows any of it. driss makes jokes. a commercial, when on the phone with a company and put on hold. by the end of the scene, driss has turned the party into something different, bringing out his own music and getting everyone to come dance out on the floor. then driss plays earth, wind, and fire.

the movie has other storylines going on too, besides all the good humored fun. there’s a side plot about phillipe writing letters with a woman, where driss pushes him to take the next step. and then there’s the way this movie takes on the usual romantic comedy formula of having the two characters separate and go through a depressing time. phillipe, in particular, doesn’t handle driss’ leaving well, grows a beard, and becomes incredibly depressed. all this changes when driss shows his face again. the untouchables works because it isn’t afriad to be different and to put humor front and center, in front of everything else.