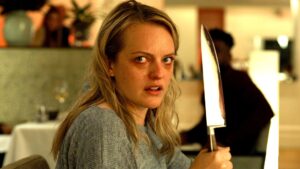 A pretty good thriller that is kind of routine in its first half, but then becomes interesting and creative in its second half.

This movie is interesting and entertaining enough. It’s definitely better and smarter than the average thriller. The only problem is that it takes nearly an entire half to really get going. That first half is all about this woman, Cecilia (Elizabeth Moss,) who was in an abusive relationship and escaped. Now she thinks the man who abused her, who supposedly committed suicide, is really still alive. In the first half we see all the little clues, sprinkled about, that show us something might be going on. The second half is where the movie really comes together and becomes something different. Elizabeth Moss takes control of the things that are happening to her, and more and more twists are revealed. It takes a while for this movie to get good, but once it does, it does not let up.

The Invisible Man sort of came out of nowhere. There was the Universal Monster Universe, that the studio was building, which they kick-started with the Tom Cruise film The Mummy. At that time, there were plans to make tons of other monster movie remakes, featuring A list stars like Javier Bardem (Frankenstein,) Johnny Depp (The Invisible Man,) and Angelina Jolie (The Bride of Frankenstein.) Only that Tom Cruise movie did terribly, and suddenly all plans for a cinematic shared Monsterverse were cancelled. Then, a few years later, this movie starring Elizabeth Moss (Mad Men, the Handmaid’s Tale,) popped up. Was this the same version that Depp was a part of? Probably not. After all, the main character is a woman and there are very few male roles that Depp might have played. And while there’s always the possibility that instead of a woman being stalked by her former lover, the movie would have been about Depp being stalked by a former business partner or something like that, it seems pretty unlikely. What probably happened is the script for that Depp movie got thrown out and a whole new thing got written here that was in no way connected to the Universal Monsterverse. The result is a standalone film that is actually pretty good.

The opening sequence is pretty great. It’s really the only great scene in the first half of the movie, but boy does it get things started off on the right foot. The scene features Cecilia (Moss,) waking up in the middle of the night, stepping out of the bed next to her lover Adrian, who is asleep, and quietly escaping the house. In order to do this, she needs to tip toe around every area and turn off all kinds of security codes. She even has a run in with his dog and a car alarm. The scene is filmed in such a suspenseful manner that even though we kind of know he’s not going to wake up, we are still on the edge of our seats. There’s something to be said for starting off with meaningful excitement right away, not wasting any time, and showing us a single scene in such detail that it actually gets us to start caring about a character we just met.

Cecilia does successfully escape, and the next thing we know, it’s three weeks later and she’s living in a house with a black man who she obviously has a close relationship with. What exactly that relationship is, is never quite explained. At one point we think maybe this man, James, is connected to Cecilia’s sister, Harriet. After all, it was Harriet who was driving the car that Cecilia escaped in, and almost immediately after we see Cecilia living in the house, Harriet shows up there and has a funny exchange with James. But she doesn’t live there, and instead James’ teenage daughter does. So the whole living situation is a little confusing (Cecilia literally shares a bed with James’ daughter, Sydney.)

When Harriet comes over to the house, she brings with her news that Adrian is dead. He has committed suicide. She shows an article headline that mentions Adrian was an optics engineer, which is the first hint of how the invisibility thing might be a possibility. But Adrian isn’t out of Cecilia’s life just yet. His death means that he had a will, and in that will he left Cecilia a lot of money. That money is hers, and to be paid out in installments, under the condition that she does not commit a crime. Cecilia decides to put all of the money in an account that will pay for Sydney to go to college. None of this is very exciting. Luckily we do get the first real hints of invisibility shortly afterwards.

Our first possible invisibility moment comes when Cecilia is in a room at night, by herself, and turns around as if someone is there. Another one comes when she walks over to a chair, feeling like someone is sitting there, and throws a blanket over the chair. Nothing. Then there’s the frying pan scene. She is making eggs and leaves the room with the eggs cooking on the stove. We stay on the eggs as they go up in smoke and then break out in a small fire. From there, we get a scene of Cecilia going outside at night, into the freezing cold air, and seeing her breath move as she exhales into the air. Then suddenly we see breath moving in the air beside her, as if someone is standing next to her. All pretty cool moments, but none especially exciting. If we’ve seen other invisibility villain movies before, like Hollow Man, this kind of thing is nothing new.

The final straw that convinces Cecilia she is not crazy comes as a threefold situation. First, she goes for an important job interview and when she opens her portfolio, finds that it is empty. The photos that she put inside of it are all gone. This causes her to faint. Which means she goes to the hospital to get checked out. And the report comes back that she has a high concentration of something in her blood. That substance is the same one that she put in Adrian’s drink the night that she escaped. Finding out that this is in her blood is the second part of the situation. The third comes when she checks the pill bottle and finds that it is the very same one she was using when she lived at Adrian’s house, that she lost while she was escaping. Now she is sure that Adrian is stalking her. She meets with Adrian’s brother, who is the attorney for the estate, and he tells her not to let Adrian torture her in his death. He confides in her that Adrian did the same thing to him, throughout his life, and that he’s happy Adrian is dead.

But things only get worse from there. Now here’s where the movie actually starts to get interesting. First, there’s an email that is mysteriously sent from Cecilia’s account to her sister, telling the sister how much she hates her. Then there is Cecilia back at the house with Sydney and James, and while she is in the bedroom alone with Sydney, the girl suddenly gets punched in the face. She thinks Cecilia did it and starts freaking out, causing James to tell her to leave. At this point, she has burned bridges with all of the characters in her life… her sister, James, Sydney. It’s time for Cecilia to start taking back her life. This propels us into the second half of the movie, where things start getting pretty good.

Cecilia starts by searching James’ house for clues of Adrian. She finds his phone in the rafters and then throws paint onto the ladder revealing that someone is indeed standing there. From here, Cecilia drives out to Adrian’s house to try and find out how Adrian is doing this. She finds the invisibility suit. It’s basically a black suit with little circular cameras all over it. This is pretty cool. It’s always great when a movie tries to explain how something extreme like invisibility, could actually happen. That’s something Hollow Man never did (all they did in that movie was say the team was designing this technology for the military.) The camera suit is pretty creative and a solid stab at putting the movie into sci-fi territory.

Now we get the restaurant scene. This is where the movie goes into high gear. Cecilia meets her sister at a restaurant, tells her sister everything (or is about to,) and then let’s just say something pretty extreme happens. It’s the most exciting point of the movie. And it results in Cecila being locked up in a mental hospital. But she uses an attempt at suicide as a way to lure Adrian out, and he ends up attacking the guards in his invisibility suit. Slowly that suit starts to deteriorate or unravel, as it gets struck by multiple things, starting with a pen that Cecilia cleverly kept hidden. This all leads to the attack back at James’ house, and the reveal of who the killer is.

And then there’s a final act. Most movies would have ended with that house scene and the reveal of the killer. That’s how the movies used to end back in the nineties. The reveal of the killer was the final twist. But this is the new generation where a simple reveal of who the killer is, is not good enough. And so there is a final scene with a pretty cool move. This entire last act, starting at the restaurant, takes the movie from an okay film into a pretty good one. For a solid half of the movie things are pretty routine, and it’s business as usual for an invisibility movie, meaning just little clues and jumps here and there. But once Cecilia starts taking matters into her own hands, the movie takes on a very different tone. From the great invisibility suit to the way the big surprises start coming fast and furious, one after the next in the final acts, this movie is really elevated by a story that keeps getting better and more exciting as it goes on.