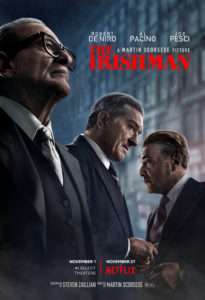 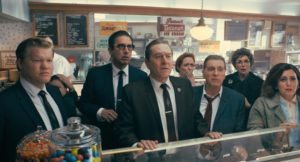 A cool hitman movie that takes a gangster approach and has everything going for it except for its length… this movie would be a masterpiece if it was only about an hour shorter.

The Irishman is a hell of a movie. It’s entertaining and fascinating and a really well-made film. DeNiro and Pesci, back with Scorcese again, making that same kind of movie they used to do so well. And with this one they’ve got Pacino on board as well. Only what they end up doing here is basically making two movies at the same time. There’s the hitman movie, and then there’s the union boss movie. All of it works, it just doesn’t work together, because it makes the movie too long. At three and a half hours, the length is pretty ridiculous. They should have made this into two films, Kill Bill style. Even still, it’s a fun time, so long as you watch it with lots of breaks in between.

Scorcese did it. He pulled it off. The mega-talented director finally made a movie that feels like it belongs right there alongside Goodfellas and Casino (arguably his two best films.)It’s not nearly as good as those two masterpieces, but The Irishman definitely captures the same atmosphere, momentum, and feel. It’s got everything from the music to the quick pans to the voice over narration. It’s got the murders and violence and “rules” of the organization. But there’s one problem… it’s just too long.

At three and a half hours, this thing is long enough to be two movies together. There’s a reason why Quentin Tarantino turned out a Kill Bill Volume 1 and a Kill Bill Volume 2. When you have a super long (over three hours,) movie  that you’re working on, you have two options… either cut it down or release it in two parts. Scorcese chose to do neither of these. The result is a lesser film than it could have been. You see, other then seeing it in a theater, this thing is nearly impossible to view in one sitting. Released as a Netflix original movie, (which is how most people are watching it,) it’s clearly meant to be viewed at one’s leisure, from the viewers own couch. Which generally means over whatever time one has available. If you’re lucky, we’re talking about splitting up into two nights. More likely it’s a lot of stops and starts. And that’s a problem. Stopping and starting a movie takes a person out of it. We all do it at times, but it’s certainly not the way you want to view a movie for the very first time. And the Irishman’s massive running time doesn’t make it easy for viewers to avoid doing this.

So the length is a problem. A big, big problem. But other than that, this is a pretty great movie. It features the return of Robert De Niro, Joe Pesci, and Harvey Keitel, all back together again, working for Scorcese. And they are all terrific. To get a little history here, Scorcese started out with Keitel and DeNiro (Mean Streets, Taxi Driver.) From there, he stopped working as much with Keitel (other than The Last Temptation of Christ,) and brought in Pesci, starting with Raging Bull. Pesci, De Niro, and Scorcese made three movies together… Raging Bull, Goodfellas, and Casino. Then, for the last decade or so, it’s been Leonardo DiCaprio as Scorcese’s go to guy. And they’ve made wonders together (The Departed, The Wolf Of Wall Street.) But other than Leo, throughout Scorcese’s career, it’s been Keitel, De Niro, and Pesci all the way. And now they are all back!

The Irishman might be nostalgic in terms of its cast, filming style and tone, but it offers its actors some new material. It has DeNiro as Frank Sheehan, a rookie in the business, (which is something we haven’t seen from DeNiro before.) And while Pesci is playing a boss, there’s no violence to his character. No temper or rage. It’s a more quiet role than we used to get with Pesci. The same can be said for Keitel, the biggest boss in the film, although it would have been nice to get a little more of him. Keitel only has one real scene. His character, Angelo Bruno, as well as Russell Bufalino (Pesci,) are the reasons why Sheeran gets into the business he does. And the movie takes us through all of it.

That means it starts out with Sheeran as a food truck delivery guy, skimming off the product. He transports steaks from one place to another, but he makes a few stop-offs along the way to bring some of the steaks to top guys that he’s trying to impress. Specifically to  Skinny Razor, (Bobby Canavale,) a guy who is definitely connected. When the truck turns out to not have anything in it one day, meaning Skinny and his guys completely cleaned the truck out, Frank gets brought up on charges. His lawyer, Bill Bufalino (Russell’s cousin, played by Ray Romano,) asks Frank two questions. First, did he do it. Frank says yes. And second, if he’s willing to give up the names of the people he was working for. Frank says no.

Well, those turn out to be the right two answers, because as soon as he is acquitted in a court of law, Bill brings Frank right to his brother, to  introduce him. Now Frank and Russell have already met, only it was under very different circumstances. Frank’s truck broke down on the side of a highway once, and he managed to get it to a gas station. That’s where Russell stepped in, as a passerby, and helped Frank fix it. But there was something pretty interesting and unusual about that gas station encounter. Russell wouldn’t tell Frank his name. Now, meeting for a second time, in a restaurant, with Bill bringing Frank over, things are completely different. Bill’s seal of approval means a whole lot. And Frank is about to start getting much better jobs.

He starts working for Russell, but also taking other jobs here and there. One of them involves blowing up a laundromat. Frank is about to do it, when he is stopped (by Skinny Razor of all people,) and brought to see Angelo Bruno. Russell is there too. They explain that the laundromat Frank was about to blow up belonged to Angelo. And they want Frank to kill the guy who put him up to it. So Frank does. His voice over takes us through every bit leading up to the murder, and then we see the murder itself. Despite knowing what’s coming, it’s still a shock.

From there, Frank becomes a hitman. We saw a flashback to him killing back in World War 2, executing two captured soldiers at point blank range after they just dug their own graves and stood their helplessly. But now Frank starts doing it for a living. He tells us about a bridge where everyone goes to throw their guns in the water, after doing jobs. And we see the pile of guns under the water. It isn’t long after this that we are introduced to Jimmy Hoffa.

Al Pacino, playing Hoffa is fantastic. In fact, all of the performances in this movie are fantastic. DeNiro hasn’t been this low-key and quietly menacing since Jackie Brown. And Pesci, well, it’s just great to see him back in anything. But Pacino probably has the hardest job, because his screen time is limited (he doesn’t appear until forty-five minutes into the film,) and his role doesn’t involve any action or excitement. He’s playing a union boss with a temper. At most, we get a scene of him jumping at a guy to attack him while in a prison cafeteria.

While Jimmy Hoffa is the real life character who is most famous in this movie, the storyline handles him as a supporting character taking a back seat to DeNiro’s Sheehan. And that works out just fine, since Sheehan is the more exciting character. Scorcese uses the story of this hit DJ to tell a different kind of gangster movie. And yet he manages to get in all the trademarks that make him such a fantastic director. There’s a barbershop Murder that is setup entirely by tracking shots following guys walking in and out of the barbershop, walking down long corridors as we follow them. There’s the physical violence that feels gritty and real because of how simple it is, as Sheehan attacks a grocery store owner for pushing his daughter. There’s the way freeze frame is used to stop a conversation, and have Sheehan’s voice over explain it, (“whenever someone says they’re a little concerned, they’re very concerned. And if they tell you they’re more than a little concerned…they’re desperate.”) This sequence is right out of  Goodfellas as two character sit by the window of a diner and the freeze frame – voice over technique goes to work, (In Goodfellas, it was also by the window of a diner, with Ray Liotta saying, “that was when I knew that if I went on that trip to Miami I wasn’t coming home.”) There are even simple moves used here, like swipes from a dance floor to a bunch of guys at a table talking, as they all are watching the dance floor, and clearly commenting on the people who are on the dance floor, (something right out of Casino.) All of it works. What doesn’t work is the running time. They should have found a way to cut this one down. Less Pacino, (he’s great, but he’s not the focus of this movie or the life of it, which means some of his scenes do slow the movie down.) Other than that, however, it’s a pretty terrific film.