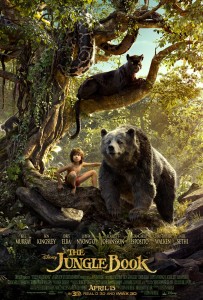 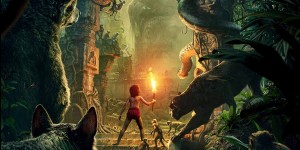 A very cool movie that is visually thrilling and remarkable, and features a pretty good story to boot.

This is a monster of a movie. It takes you right into the heart of the jungle and does it with the most spectacular visuals of animals that look incredibly realistic. This is all done on green screen, which shows you the extent of how far technology has come. Here, it is used to tell the story of this boy, Mowgli, being raised by the animals and now facing off against a new threat. The story itself has quite a lot in common with that of the Lion King, but despite the familiarity, it’s kind of cool to see a sort of live action version of that plot. The voice work is terrific, especially from Bill Murray, as Mowgli’s lovable cuddly brown bear friend. The action is great, and save for a couple of bumps in the story, and maybe some places where a little more humor could have been added, this is definitely a success.

The Jungle Book is an unbelievable achievement in technological innnovation. It’s a movie that is filmed entirely on green screen. Now there have been other films like that, such as Sin City or 300, but what makes this movie so special is that whereas those movies had backgrounds that looked like drawings (intentionally, to be like the graphic novels,) this one has backgrounds that look and feel realistic. This might be the most innovative film since Avatar, where cameras were invented that would show the actors as characters and would show the imaginary background images with the characters walking through it, as the actors walked around.

For director John Favreau, pushing the limits is nothing new. He’s the guy who launched the Marvel franchise, (which now every studio is trying to copy the shared cinematic universe formula of,) when he directed Iron Man. Favreau has a unique mind as a direcotr. From Made to Elf, he ceetainly has got the comedy chops down. But as an action movie director, Favreau has shown himself to be hit and miss. Iron Man was great, Iron Man 2 was lousy, The The Jungle Book is great, Cowboys and Aliens was lousy. Luckily, each of his movies that really is great is an achievement on such a high level that you can see it either has or is about to change the playing field of making movies. Iron Man certainly showed us that, as now, nearly a decade later, Marvel is the biggest money making juggernaught in town, that everybody wants to be just like. The Jungle Book is sure to inspire other films that use this sort of technology and build off of it, as well.

The movie is based, of course, on the famous Rudyard Kipling book about a boy named Mowgli who lives with the beasts of the junlge. Mowgli is a name that the animals, in their language, say means “man cub.” The story line about Mowgli being raised by these creatures, but having to leave them because of a threat, only to come back and set things straight later on, has a lot in common with the story of The Lion King. Now, to be fair, The Jungle Book was written long before that film, and it seems pretty clear that the Lion King took elements from The Jungle Book and reworked them.

Both films are about our hero pretty much being banished from the others and going out to make it on his own. There’s an evil king who is much more powerful than the other animals, and he’s the one who banishes our protagonist or drives him away. In the case of The Jungle Book, it’s a matter of Mowgli being threatened by this king, Shere Khan (voiced nicely by Irdris Elba.) That’s when our hero travels out into the world and makes friends with new characters who sort of show him a new way of life. In the Lion King, it’s Timone and Pumba. In the Jungle Book, it’s Baloo the bear. Funny enough, in both cases, the new friends teach our protagonist a song, that the friend has been singing for a long time, as a sort of mantra. These songs are Hakuta Matata and Bare Necessities.

But the Jungle Book has more than just an entertaining storyline. It has fantastic action and incredible visuals. The movie opens with a scene of Mowgi, running, jumping, and climbing through the trees. It’s a chase scene and there’s a ferocious panther hot on his trail. The camera swings around and moves all over the place in order to follow these characters has they fly from the branch of one tree to another. When the whole thing ends, we learn that it was just a training exercise, but a pretty cool way to start the film. From there, we go to the peace rock, where all of the animals meet, (in the Lion King, the place where the animals met was called Pride Rock.) Here, the peace rock is a place where there is a pool of water and a giant rock in the middle. The animals come to drink from the pool, and there is a truce that exists here, among them, where no animal will attack another. They believe in drinking before eating, and this is a place where no animal needs to have any fear.

That is until Shere Khan shows up and starts making threats against Mowgli and those who would try to keep him safe. Khan Makes claims it is unnatural to keep a human living with them and tells the others how Mowgli will grow up to be a hunter just like their enemies, the humans. The other animals aren’t buying it. They consider Mowgli to be one of them, and have raised him ever since he was a baby. Still, Khan continues to show up and make threats, and at one point he even kills the alpha male of the wolf pack who is the most like a father to Mowgli, (Scar killing Mufasa, the parallels between the movies just don’t stop.)

Mowgli ends up running off and meets Baloo, the big and lovable brown bear, voiced by Bill Murray. So far the voice talent has been pretty good, but with the addition of Murray it gets taken to a whole other level. Idris Elba was pretty menacing as Shere Khan. Ben Kingsley as the panther who acts as a mentor to Mowgli, was just okay. But now, with Murray, it’s suddenly a whole different kind of game. Murray is such a talent and a comedic star. Unfortunately this movie only allows him to do a fraction of what he’s capable of, in the comedy department, but with whatever he’s given, Murray knocks it out of the park. One of the of the best scenes in the movie comes when he teaches Mowgli how to help him climb up the side of a mountain to a bee hive and knock it down so that Baloo can get their honey.

The two of them meet up with Bagheera, the panther, (Kingsley,) and together they all find themselves at a sort of crumbling ancient Amazonian temple, right in the heart of the jungle. They end up there because Mowgli is kidnapped by a group of monkeys who bring him to their leader, a gigantic orangatang, named King Louis, (voiced by Christopher Walken.) The temple location is a a fantastic set piece, and the King Louis character looks fantastic. But other than that, I’m not sure this sequence adds a whole lot to the story. It almost seems like filler, as  a sort of detour, before getting to the main event, which is taking on Shere Khan. I suppose wihtout King Louis, you don’t get the story of the red flower, which leads to the climactic showdown, but that red flower story could have certainly come from other places. The King Louis story should have had more of a direct relationship to the Shere Khan story. That would have helped this all feel like it gelled together nicely.

There are bumps in the road like that, which pop up occasionally, and either feel out of place, or just way too quick. Another one is a scene where Scarlet Johansen shows up as a giant python named Kaa. She wants to meet Mowgli, the same way that Shere Khan does, and her relevance is only that she leads to Mowgli meeting Baloo. Still, from such a talented voice actor (Johansen did wonders with her voice and nothing else, in the movie Her,) you would hope the movie would give her a little more to do. Between this character and King Louis, there definitely appears to be a problem of some characters not factoring into the plot nearly as much as they should.

And then there’s the issue of the comedy. It’s just not in the movie as much as it should have been. Not when you’ve got Bill Murray playing one of the leads. There’s one scene, while Mowgli is up on the mountainside getting honey from a hive, and some little rodent comes up to Baloo asking what Mowgli is. Baloo explains that he’s a man cub. Then the rodent explains to another animal that Mowgli is a man cub, and this goes on for a while, with the same questions being asked, until Baloo has to shout at them, “would you please shut up?” This is Murray hilariously losing it, the way we have seen him do in movies so many times before. It is very similar to the scene in Scrooged, when he couldn’t take the hammering on the set any more and had to shout at the stage hands to knock it off. The Jungle Book could have used more humor like that. As an action adventure that is visually stunning, this movie is a monster success. In terms of storytelling, it’s pretty good. But there could have been more comedy, and some of the new characters that were introduced could have connected to the overall plotline a  little better.